The Colors of Fall: Are Autumn Reds and Golds Passing Us By? 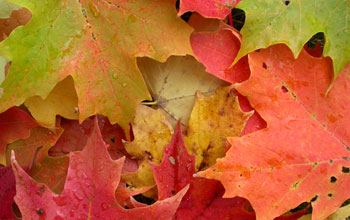 Autumn leaves: How long will the brightest colors be with us?

"The falling leaves drift by the window, the autumn leaves of red and gold ..."

It was 1947 when Johnny Mercer wrote the lyrics to the popular song "Autumn Leaves." Sixty-five years ago, Mercer likely didn't think the reds and golds of fall might someday fade.

But that is what's beginning to happen in the U.S. Northeast and Mid-Atlantic regions.

Autumn colors were different there a century, or even a half-century ago, and they will likely continue to change, says ecologist David Foster, principal investigator at the National Science Foundation's (NSF) Harvard Forest Long-Term Ecological Research (LTER) site in Massachusetts.

Harvard Forest is one of 26 such NSF LTER sites around the world in ecosystems from forests to deserts, grasslands to coral reefs.

"The brilliant fall foliage so emblematic of New England forests was not always so, as the history of Harvard Forest shows," says Saran Twombly, NSF LTER program director.

"Today the current, rapid changes linked with climate are unpredictable," says Twombly, "threatening both the forests and our deep appreciation of them."

The changes are largely a result of human activity: Land-use change, introduced pests and diseases that affect forests, and climate change from fossil fuel emissions.

To date, the timing of leaf color change has stayed fairly consistent from year to year, says Foster, although out-of-sync weather conditions can advance it or hold it back.

At the start of the 20th century, much of the New England landscape south of Maine, famed for its brilliant maples, was covered by white pine forests that filled in abandoned fields and pastures left fallow.

As the white pines were harvested, they were succeeded by broadleaf, or deciduous, trees: maples, oaks, birches and others.

Autumn color flared across the landscape.

American chestnuts, whose leaves turn yellow in fall, were common trees in these forests, says Foster. But mature chestnuts were killed by an introduced fungal disease, chestnut blight.

Now only small chestnut sprouts linger. "Our forests would have produced more yellows and fewer reds with chestnuts in the mix," says Foster.

With many sugar maples, the forests turned a striking red. The trees' abundance in eastern Massachusetts and coastal southern New England is a result of extensive planting along roadsides during the 18th and 19th centuries.

Sugar maples provided a source of sap for maple sugar, important in the commerce of the day.

The maples are near the southern end of their range in Massachusetts. It's likely, says Foster, that they will move north over the next century, thanks to increasing temperatures.

Massachusetts may one day seem like Virginia to the trees--and to the September and October people who come to see them.

"Over time," Foster says, "the autumn colors of our forests may fade as conditions become less favorable for northern trees such as sugar maples."

The result will reverberate not only through forest ecosystems, but through a region economically dependent on fall foliage tourism.

Trees that are left behind, such as ashes, dogwoods and others, may face diseases already spreading through the forest. These diseases may be exacerbated by warmer temperatures.

For some trees, however, the yellows and reds of fall appear to offer a defense mechanism. The colors may repel insects and keep them from laying eggs on leaves, reducing damage to forests the following year.

Birches' bright yellow may be a "go away" sign to egg-laying insects: The color is a clue that the leaves are unpalatable or toxic. Insects move on, attracted to plants without defenses.

Deciduous trees aren't the only ones affected by environmental change and diseases. The loss of evergreen trees may also have an effect on autumn colors.

Hemlocks--conifers common in valleys, on steep slopes and along streams--are disappearing from Northeastern forests. The culprit is an introduced insect pest, the woolly adelgid.

At Harvard Forest, hemlocks are infested with woolly adelgids. The trees will begin to die over the next few years.

"It's not clear how far north these insect pests will move," says Foster. But as hemlocks fall, they will be replaced by black birches, whose leaves turn yellow in autumn.

Lack of rainfall in summer, such as this year's extensive drought, also affects trees and their ability to produce the shades of autumn.

They may lose their leaves prematurely or start to turn color earlier than usual. Their hues may look dull and washed out when they should be vibrant.

If April showers bring May flowers, July and August rains lead to the bright reds and yellows of September and October.

The Northeast is becoming a place of warmer temperatures, increasing droughts, changes in land use, and tree diseases and insect pests.  All are on-the-march through the forest.