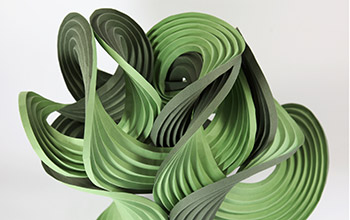 "Green Balance," on Mi-Teintes watercolor paper, was created by Erik and Martin Demaine.

"We think of both art and science simply as creative endeavors," says Erik Demaine, professor of computer science at the Massachusetts Institute of Technology (MIT). "Often, we take on a project without knowing whether it will end up as art or as science. Maybe it will be mathematically interesting, and we will write papers about it. Or maybe it will be artistically interesting, and we will make sculptures about it."

Three of their folded paper sculptures currently are on display through Feb. 3, 2013, in a special exhibit at the Smithsonian Institution's Renwick Gallery called "40 under 40," featuring works by 40 artists under the age of 40. Erik, obviously, is the one under 40. His father is listed as a collaborator, but is not considered one of the 40. "My father thought it was great to be included, and kept joking how he had gotten younger," he says.

Their first collaboration came when Erik was six, and the two established "The Erik and Dad Puzzle Company," making wire, take-apart puzzles they designed, which were sold through toy stores around Canada. Erik grew up in Halifax, Nova Scotia, where his father home-schooled him, and entered Dalhousie University when he was 12, graduating at 14. He earned his doctorate at 20, when he became an assistant professor at MIT--believed to be the youngest professor in the history of the school.

Some years ago, his father, who also now lives in Cambridge, Mass., became fascinated with theoretical computer science, and began teaching himself. "He got intrigued by my computer science and I got intrigued by his art," Erik Demaine says. "We started working on computational origami, which has a natural offshoot in the art world. He is equally interested in the science: We've written more than 100 papers together."

The two began turning science into sculptures about 15 years ago when "I was searching for interesting mathematics of origami to explore, and he was exploring the art side," he says. "I started becoming an artist at the same time he was becoming a computer scientist. Now we are both much more balanced. The more we do it, the more we like to think of art and science as the same thing."

He acknowledges that he and his father sometimes disagree, "but they're not fights," he says. "We have different perspectives on the way we think something will work, and we resolve them by trying both."

Demaine conducts his folding research with computational algorithms, sometimes run on an actual computer and sometimes in his head. He often uses a computer drawing program that can draw lines and circles and find the intersections, so he can print it out and fold it. "I might test several possible foldings until I can figure out the solution," he says. "Even when I know in theory that a method will work, it's fun to try it out in practice and see it in action."

There are important practical applications to what he does, most important among them the challenge of finding ways to move large objects through smaller spaces. "There are a lot of scientific and engineering applications to having a physical object that can change shape," he says. "This comes up in transportation or in the human body in blood vessels. You need to get something really small until it reaches its destination, and then can expand out."

The National Science Foundation has been supporting Demaine's research for more than a decade. In 2004, Demaine won a $400,000 Faculty Early Career Development (CAREER) award for his work in geometric folding algorithms. The award supports junior faculty who exemplify the role of teacher-scholars through outstanding research, excellent education, and the integration of education and research within the context of the mission of their organization. Demaine still teaches a class on the subject at MIT. (Video lectures of this class are available at no charge online.)

In 2003, Demaine received a prestigious $500,000 "no strings attached" MacArthur Fellowship, or "genius" grant. In describing his work at the time, the MacArthur Foundation said: "Demaine moves readily between the theoretical and the playful, with a keen eye to revealing the former in the latter. For example, he recently demonstrated that a popular computer game, Tetris, represents an example of a computational geometry problem that falls into the ‘NP-complete' category, implying explosive growth in difficulty with no shortcuts available."

The Demaine sculptures in the Renwick exhibit explore the concept of curved creases, a departure from traditional origami, which typically involves folding straight creases.

"Suppose you want to fold a space station," he adds. "You give the computer algorithm your 3-D drawing of your space station and it tells you how to put in the curved creases, and if you put them in at once, it will pop into your desired shape."

The Demaines attach great value to the interplay of art and science.

"On the one hand, we have some very interesting geometric sculpture. And, on the other hand, we are growing our understanding of these forms that ultimately will lead to some scientific and engineering applications," he says. "Our sculptures also represent a different way of communicating with the public. For scientists, it's another medium to communicate that there are both interesting and beautiful things in science and math."