A Student's Road to Research 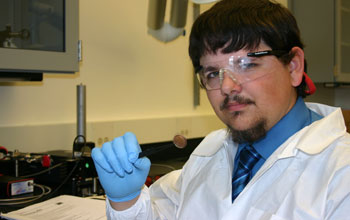 For many young undergraduates, the opportunity to engage in research for ten weeks during the course of a summer often inspires a singular moment when the students actually can see themselves as future scientists. It happened to Keith Berry Jr.

"It was eye-opening," he says. "I suddenly felt that it was really something I could be doing long term. I thought I would like research, but there aren't many opportunities just taking classes. This program showed me some of my abilities, and some of the things I was able to do. I'd thought it would mostly be graduate students doing the work, with me helping out. But for me, it was hands-on everything."

In 2010, Berry participated in the National Science Foundation's (NSF) Research Experiences for Undergraduates (REU) program, which allows students to engage actively in research in scientific areas funded by NSF. REU projects involve students in meaningful ways in ongoing research programs, or in research projects specifically designed for the REU program. They work under the supervision of a professor, usually at institutions other than the ones they are attending, and often with additional mentors from the lab.

"It is meant to be a pathway to encourage young people who may not have had an opportunity to do research at their home institutions to participate in that experience," says D. Keith Roper, a program director in NSF's Division of Engineering Education and Centers and professor of chemical engineering at the University of Arkansas, where he serves as Berry's mentor. "They are looking for promising students, and many universities who sponsor these program look at it as a good recruiting tool for graduate school."

For Berry, a chemical engineering major at the University of Arkansas (U of A) who hopes to graduate next year then attend graduate school there, the work involved creating an inexpensive method of forming and encapsulating gold nanoparticles inside a polymer matrix, making nanocomposite polymers for use in biomedical applications.

Using nanoparticles allows scientists to manipulate electromagnetic waves to a scale much tinier than the waves themselves, enabling the naked eye to distinguish objects hundreds of times smaller than previously possible under a standard optical microscope.

The polymer in this study, polydimethylsiloxane (PDMS), "has a long history in the medical community," Roper says. "It is a platform technology. It is used in an array of medical devices."

A paper describing the work in which Berry was the lead author was recently published in the journal Nanotechnology. Berry still works in Roper's lab.

Phillip Blake, an electron/optics expert in Roper's lab at the U of A and another author of the paper, describes Berry as "very driven to not only perform experiments, but to understand why the experiments were being done and what impact they had on the final outcome." This trait, he adds, "was very beneficial to the mentoring process, because I could ask questions about the experiments he was doing and help guide him in the learning process."

Roper, who also is assistant director of the U of A's microelectronics-photonics graduate program, calls Berry "unassuming, introspective and determined." He adds: "It's been a privilege to work with him and watch him grow. I think he's an excellent role model for the kind of student we are encouraging to pursue engineering today to meet tomorrow's challenges."

Yet the path to Berry's undergraduate research success was not easy. Berry, a Native American who grew up in Hot Springs, about a hour south of Little Rock, spent his first year at a community college, then studied architecture during his sophomore year after transferring to the university. He switched to chemical engineering after he realized that architecture "wasn't really what I wanted to spend my life doing," he says.

He turned to chemical engineering, recalling that "in high school, I took chemistry classes, including AP chemistry, and found out I was really good at it." He adds: "I had the highest grade at the end of the year, so something really clicked. I was also good in math."

Yet he fell a semester behind after a tornado destroyed his parents' mobile home. Berry, the middle of four children, returned to the town of Royal, on the outskirts of Hot Springs, to help his parents remove the downed trees and debris. Everything they had was destroyed and "they are having to start all over," Berry says.

"The emotional and financial impact of the storm was devastating," Roper says. "He left school and work to assist his parents with the clean up and return to normalcy."

Also, about two weeks later, his father, who travels around the country as a window installer, was robbed at gunpoint in Memphis.

All of these distractions "caused me to lose my focus," Berry says of his grades, which came perilously close to failing. Yet his determination and his unwavering religious faith prompted him to persevere. "I retook my classes and didn't spend a whole lot of time trying to use that as an excuse," he says. "I just moved on. I never considered giving up."

With federal assistance, Berry's parents are building a new house. And with university financial aid, Berry is back on track, educationally.

"Keith returned to school and research, and finished his work on the manuscript," Roper says. "Participating in undergraduate research has been a highlight and mainstay of Keith's undergraduate education. He is a model of persistence and reliability in the lab."