How Liquid Crystal Displays Work in an eWriter

The Boogie Board eWriter developed by Kent Displays Inc. as an alternative to paper products 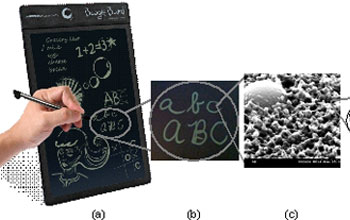 The Boogie Board eWriter features a flexible pressure-sensitive display.

Electronic tablets are all the rage, including one that eschews applications and graphics to simply capture text and doodles--the Boogie Board writing tablet, or eWriter.

Liquid crystal displays, also known as LCDs, contain molecules ordered in a particular orientation that interact in complex ways with light and electric fields and are built upon principles discovered in the late 1800s. (See the National Science Foundation's (NSF) Chalk Talk on liquid crystals.)

The fundamental liquid crystal research that ultimately led to the development of the Boogie Board eWriter began in 1989 as part of the NSF's Science and Technology Research Center for Advanced Liquid Crystalline Optical Materials (ALCOM). The research brought together scientists from Kent State and Case Western Reserve Universities and the University of Akron to study the fundamental properties of liquid crystal materials and develop novel applications for their use.

The researchers succeeded in generating many new technologies that have had a strong impact on the flat panel display industry, influencing its growth in the United States. One of the ALCOM researchers invented a type of LCD that features low-powered, rugged, flexible screens for displays and writing tablets.

The team's research led to eight patents, the basis for a start-up company, Kent Displays. The company originally made a range of display products, but more recently has focused on products that incorporate flexible plastic substrates manufactured using high-volume techniques called roll-to-roll manufacturing.

The roll-to-roll line takes rolls of plastic substrate and continuously combines them with the liquid crystal material, creating a flexible pressure sensitive display--the fundamental element of the eWriter. The manufacturing line is highly versatile (located in Kent, Ohio) and has been in operation since 2009. Indeed, KDI is developing a second line to add more capacity and capability.

The first product to come off of the original manufacturing line is the Boogie Board eWriter, a result of both the center research and later grants from the NSF's Small Business Technology Transfer program. The company has sold 1 million devices, all manufactured in the U.S. since the eWriter rolled off the production line in January 2010.

In the competitive gadget market, KDI has found a place for a product like the eWriter, which is not a complex computer tablet or an electronic reader, but a new device category altogether--an electronic writing pad, specialized for generating content (writing) rather than consuming content (reading or watching).

The board's liquid crystal technology creates a writing experience very much like a pen on paper. Mechanical pressure from a stylus on the writing surface causes an image to instantly appear under its tip. This eliminates the distracting delay and parallax that often makes writing difficult on other electronic device types. The plastic display of the eWriter, which retains an image without using any power, permits a lighter, more rugged device with longer battery life and a substantially lower cost.

The eWriter works on the principle of anisotropic flow, a unique feature of cholesteric liquid crystals in which crystals flow at different rates, depending on the direction of pressure being applied. When a thin film of cholesteric liquid crystal is sandwiched between two sheets of specialized plastic, anisotropic flow causes the molecules to order themselves to reflect light in those places where a stylus touches the plastic sheet.

The liquid crystals are surrounded by polymer pillars, which control flow, resulting in excellent line sharpness. The written image is retained until electrically erased with the push of a button. In electronic erase, the flash of an electric field rearranges the molecules so that they are less reflective.

Through the NSF grants, the researchers investigated the microscopic polymer structure for further improvements and engineering, as well as the nature of the chiral structures--results that have been critical for advances at KDI.

Recently, St. Richard Catholic School in Edmonton, Alberta, adopted the Boogie Board for its elementary students. The school initially purchased the technology to reduce paper consumption and has exceeded its paper reduction goal twofold, to 40 percent of their original paper use.

Since the Boogie Board eWriter's initial launch, KDI has added several features such as the ability to save work as a PDF and transfer the PDF to a computer.

This Behind the Scenes article was first provided to LiveScience in partnership with the National Science Foundation.