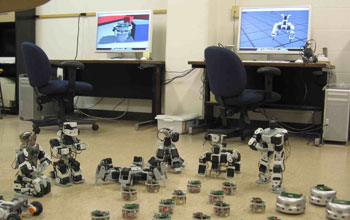 Evolution is not just something from the past. It also happens in real time. Bacteria mutate and resist antibiotics. Viruses reinvent themselves and elude new medications. Animals adapt their behavior in response to a changing planet.

Traditionally, researchers have studied evolution by looking back, often using fossils and other relics to understand how organisms have changed over time in order to survive. It is an established and valuable approach.

But it is not the only one. Thanks to new sophisticated computational technology, scientists now can combine field observations with digital evolution systems, enabling them to answer important biological questions, as well as solve non-biological problems using evolutionary methods.

"It's not that what we're doing won't shed light on evolution over millions of years, but we also are able to study things we can actually observe with our eyes," says Erik Goodman, director of the BEACON Center for the Study of Evolution in Action, which is conducting much of this work. "We are looking at evolution in the real world."

Computer software allows the researchers to create digital organisms, similar in some ways to real bacteria and viruses, for example, that can copy themselves, make mistakes and cause mutations--essentially behaving like their real life counterparts. The difference, however, is that the digital creatures can do it in a fraction of the time.

"For example, if we find some phenomenon going on in the lab that we can't explain, we can take it into the digital world and get an explanation of how it might work," Goodman says. "Then we can take it back to the lab to see if that explanation holds in the real world."

Engineers also can use engineering simulation software to create an environment where new product designs can "evolve." With each generation, the computer makes random mutations in existing designs in order to produce new ones. The simulation software then evaluates each new line and allows the better ones to survive, much like evolution in nature. Computers also can "evolve" new robot programs, making use of natural selection and enabling the machines to respond to human or animal interaction.

"How, for example, would you design robots that could cooperate with each other to work together toward a unified goal, to reward them when they cooperate and punish them when they cheat?" says evolutionary biologist Richard Lenski, professor of microbiology and molecular genetics at Michigan State University (MSU). "Evolution solves some of these difficult problems, and this is a way of allowing computer programs themselves to engage in their own form of evolution and natural selection."

BEACON researchers include biologists, engineers and computer scientists who collaborate on biological and digital evolution, and evolutionary approaches to engineering. The center also has an artist-in-residence who examines evolution through an artistic lens.

Ultimately, their work not only will provide a better understanding of evolution, but also potentially could prompt medical innovations such as new vaccines to target elusive viruses, and improved product designs.

"We aren't doing medical research, but trying to understand underlying mechanisms," Goodman says. "If we knew more about how certain viruses evolve, for example, we could target the weak points to develop better vaccines. In the area of product design, for example, we have designed new parts for automobiles using computer programs based on evolution. The computer programs can generate a bunch of designs at random, and the better ones become the 'parents' of the next generation. It works like natural selection, it mimics the evolutionary process."

Kay E. Holekamp, professor of zoology at MSU, studies mammalian behavior, focusing on hyenas, and is collaborating with BEACON engineers to develop robotic hyenas that someday will interact with real ones. The goal is to help answer long-standing questions about how the animals communicate with one another. The scientists still are in the planning stages, but Holekamp hopes to be using these robots in her research within several years.

"Hyenas ‘talk' to each other using different modalities," she says. "They engage in posturing; they position their tails and their ears in a certain way. They vocalize. They emit multiple signals. I can't ask the hyenas to stop, while I work with one of them, but I could program the robots. If I can manipulate the robots from my car, and monitor the hyenas' responses, I can understand what they are communicating. I couldn't possibly do that in the real environment."

Together with her BEACON collaborators, Holekamp also is developing a computational theory of how cooperative behavior evolves among competing predators, again, focusing on hyenas. She plans to simulate cooperative hyena behavior; specifically, how they collaborate to steal food from lions, and how they compete among themselves for the food when they get it.

"Our research team will first videotape the events in nature and then model them with computational simulations in order to study their evolutionary origins, including the conditions under which each behavior is effective," she says. "The result will be a computational theory of how and why competing predators cooperate, as well as computational methods for evolving complex cooperation among intelligent agents in virtual environments."

She adds: "Hyenas are disastrously difficult to study in terms of evolution because they reproduce so slowly. They also appear to violate a lot of the rules of mammalian biology. For example, the roles of male and females are completely reversed. In most mammals, the males are bigger and stronger and more aggressive. In hyenas, it's the females.

"Also, these animals live at the top of the food chain, but their societies are nothing like those of other carnivores," she continues. "They violate the rules of density. Most mammals at the top are relatively rare, but hyenas are plentiful, living in big groups that can contain as many as 90 individuals. I think these particular animals are among the most interesting on Earth."

In another way of looking at evolution, BEACON artist-in-residence Adam Brown is creating a robotic art project made up of about 150 3-D sculptural robots mounted on walls and capable of communicating with each other, and will use computational evolution programs to discover the kinds of behaviors that will inspire interaction with humans.

Brown explains: "Let's say you want to evolve robots who want to be touched by humans--what kinds of behaviors must the robots engage in to encourage this? Flashing lights? Sounds? We use the tools of evolution--evolutionary algorithms--to solve the problem. Over a five-minute span you can have more than 10,000 generations for a specific task, something you can do with computational technology that you can't do in the real world."

In another piece connecting evolution to art, Brown and Robert Root-Bernstein, professor of physiology at MSU, built an art installation recreating the classic 1952 Miller-Urey experiment on the origins of life, simulating what is thought to be Earth's original atmosphere by combining hydrogen, ammonia and methane in a glass chamber, with zapping electricity as "lightning" to form amino acids, which are critical to life.

The piece, called "Origins of Life Experiment #1.2," reinterprets the work of physicist Harold Urey, who proposed that it might be possible to recreate the atmosphere of the primordial Earth in a closed container and synthesize organic molecules by adding an energy source such as lightning to the mix. Stanley Miller, a graduate student, conducted the experiment, producing--within days--several amino acids. The Miller-Urey experiment quickly became a scientific and public icon of origins of life experimentation.

"This experiment was inspirational to me," says Brown, associate professor of electronic art and intermedia in MSU's Department of Art and Art History. "I wanted to take this science experiment and put it into the context of art."

In addition to the research and art, BEACON center scientists have established summer programs for high school students and undergraduates, and are working with graduate students to expose them to new cross-disciplinary concepts of evolutionary and computational biology.

"By having both of these systems available, the students learn a different way of formulating their hypotheses, and asking their questions," Goodman says. "Then, when they start working with digital organisms, they also can get results the next day and the next week--rather than having to work for years in the lab."

Related Awards
#0939454 BEACON: An NSF Center for the Study of Evolution in Action
#0819437 LTREB: Fitness Consequences of Pleiotropic Androgen Effects in Free-Living Mammals
#1059373 II-EN: Evolution Park - An Evolutionary Robotics Habitat for the Study of Crawling, Swimming and Flying Creatures