Sensor Network to Protect the Elderly

System monitors seniors' health in the comfort of their own homes 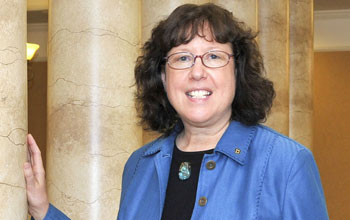 Many elderly people dread the prospect that chronic medical issues will force them to leave their homes for an assisted living facility or nursing home, making them dependent upon others for their care and personal needs. Sometime in the near future, however, new technology could help them remain in their homes longer, perhaps indefinitely, without having to give up their independence.

"Our goal is to keep people in their private homes for as long as possible," says Marjorie Skubic, professor of electrical and computer engineering at the University of Missouri. "The idea is to detect functional decline or early signs of illness, so we can identify problems when they are very small and proactively address them before they become catastrophic. That way, mom won't have to leave her home."

Skubic and Marilyn Rantz, a curator's professor of nursing at the university's Sinclair School of Nursing, have developed a sensor network that can remotely monitor changes in peoples' activity patterns and baseline health conditions, and alert health professionals to early signs of illness and functional decline.

The beauty of the system is that it can be installed in peoples' homes and monitored from afar, providing automated data that indicates the possible need for medical assistance, and allowing the elderly to avoid unnecessary trips to clinics and doctors' offices. This is a significant advantage for older people, for whom travel often can be difficult, especially if they no longer drive.

While the ultimate aim is to place the system in private homes, the scientists currently are testing the sensor network in TigerPlace, a Columbia, Mo., eldercare facility operated by Americare. They recently received a National Science Foundation (NSF) grant to expand their research to Western Home Communities, a second location in Cedar Falls, Iowa. The researchers regard this as a first step toward implementing the system in independent housing, "where most seniors want to be," Skubic says.

The equipment, which is installed in the home environment and passive for the individual, includes motion detectors, video gaming technology based on the Microsoft Kinect system that can monitor gait, and a newly developed hydraulic bed sensor that goes underneath the mattress and can measure an individual's pulse, respiration and restlessness during sleep.

"We don't expect the residents to do anything special," Skubic says. "In fact, what we want is for them to be able to live their typical lifestyle pattern and go about their daily activities while, computationally, we are capturing a pattern that represents their usual behavior in their homes, and then we look for changes."

The work is supported by a White House initiative, US Ignite, and NSF, the project's lead federal agency, which aims to realize the potential of fast, open, next-generation high-speed networks. US Ignite expands upon the NSF-funded Global Environment for Networking Innovation, or GENI, which is laying the technical groundwork for the program.

US Ignite is connecting a series of high-speed broadband resources to establish a testbed across universities and cities on a national scale, providing a fast, programmable "virtual laboratory" to allow academic researchers to experiment on future Internets.

The in-home monitoring system designed by the University of Missouri researchers is among the first US Ignite grants funded by NSF through its EArly-concept Grants for Exploratory Research (EAGER) program.

"We're monitoring people with lots of different ailments such as diabetes, arthritis, hypertension and cardiac problems," Skubic says. "First, we establish a baseline of behavior for each individual--we personalize it for each individual--so that we can look for deviations over time. If we see any, we send a health alert to the clinical staff."

For example, motion detecting sensors, installed in every room and in other specific places such as inside a refrigerator or kitchen cabinet, provide a measure of activity level.

"These sensors are set to generate an event every seven seconds," Skubic says. "You get a sense of how active or sedentary a person is. If somebody sits in a chair for a good portion of the day, you get a low density, whereas an active person constantly moving around will generate a higher density. You can look at density for different hours of the day. The other thing the motion detectors can tell you is when someone leaves the house. If they stop going out, it could be an early detector of health problems."

The Microsoft Kinect system, a gaming interface, allows the individual's body to act as a "controller," using a depth camera to record movement. The camera captures a 3-D silhouette that represents the moving body. The purpose is to assess gait, including walking speed and length of steps. Shorter footsteps, which can lead to slow walking speed, often can be an early indication of frailty and cognitive decline, and also increases the risk of falls.

"If you detect that somebody's gait is changing, and they are at risk for a fall, you'd like to identify it so you can provide some kind of intervention, such as physical therapy," Skubic says. "If you can find muscle weakness or imbalance before they cause problems, exercises can be used to strengthen them."

The newest piece of the sensor package is the bed sensor, which "captures pulse and respiration rate and restlessness in bed," she says. "If someone is not sleeping well, it can be an early sign of illness, or might be an indication of pain, or infection, or a breathing problem. For example, we've been able to detect a number of urinary tract infections before the resident even knows there is a problem because of restlessness and changes in bathroom patterns that show up at night--they get up more often--but the changes are so subtle, they don't even realize it. But it's really important to catch these early."

When the sensor network detects changes, the system sends an automatically generated email to clinicians, "who can take a closer look at what's going on," Skubic says. "We rely on the clinicians to make the diagnosis and the clinicians have come to rely on the health alert system for early warnings. High-resolution video conferencing is used to provide face time between the local clinicians and the residents in Iowa."

The researchers see commercialization of the equipment as the next step, while they continue their testing. Moreover, they also are pursuing additional research ideas to improve the system, including additional sensors and new computer algorithms for better health alerts.

Eventually, they hope it will be more widely available, offering peace of mind for seniors, their family and their caregivers. "This has such a potential to proactively help seniors stay healthy and in their own homes, while at the same time saving health care costs," Skubic says. "In the Cedar Falls site, we have installed these systems in apartments in a 100-year-old building. If we can install them there, we can install them anywhere."