Helping Landowners With Waste Wood While Improving Agribusiness and Energy 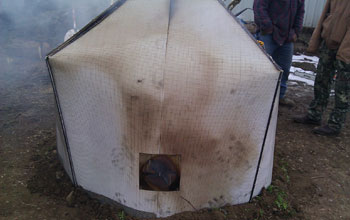 A tent-like kiln is placed over woody waste material to change it into biochar.

Every year, millions of tons of wood waste produced by commercial timber harvests and forest restoration burn in open piles that send untold amounts of carbon dioxide (CO2) into the atmosphere. Thus far, it's the only economically feasible way to destroy it. "It's a problem--and an opportunity," says Daniel Schwartz.

Schwartz, professor and chair of the Department of Chemical Engineering at the University of Washington, is working on an inexpensive but convenient system that would convert that waste, known as "slash," into a usable product, while keeping much of that excess CO2 out of the air.

The potential amount of energy from all that waste is comparable to what comes from the Alaska pipeline, according to Schwartz, "so it's not small."

He adds: "We would like to capture that carbon and use it for something valuable to society. There is so much of this waste wood, if we can do something creative with it, it can have a real impact."

Schwartz and his students have invented a heat-resistant laminate "blanket" that wraps around a burning slash pile like a kiln. The material is impermeable to air and punctuated with adjustable vents that control air flow, much like the air holes in a typical barbecue. Closing off the vents causes the fire to smolder, rather than burn, creating a chemical process called pyrolysis that turns the wood scraps into charcoal, called biochar.

Biochar results when wood or other plant materials are heated in an oxygen-deprived environment, which cooks off all the water and other volatile materials without turning it into ash, as normally occurs with an oxygen-fueled fire. Instead of ash, what's left is biochar.

"People have been making charcoal for thousands of years," Schwartz says. "It's an ancient technology. This is a high productivity, low smoke way of making charcoal."

Making charcoal itself can be controversial because smoldering piles make lots of smoke, which can contribute to global warming as much or more than CO2 from a clean burn. The technology involved in using the blankets, however, actually reduces smoke.

Also, "we use the words 'waste wood' often because charcoal production in the Amazon causes significant deforestation," Schwartz says. "People remove trees solely for making charcoal, deforesting the rain forest and producing gobs of bad smoke. Deforestation is a bad thing, whereas ecologically dealing with existing waste and improving soil is a good thing. I think we do a good job on this."

The blanket panels fit in the back of a pickup truck, making them easy to transport, and they are inexpensive to operate and make. "It's a laminated blanket that has a thin layer of metal foil that blocks oxygen, and a thin layer of insulation material that holds heat in, and a couple of layers of mesh around it, so it's tough enough to pull over a bunch of slash," he says.

Biochar, like coal, can be burned for energy. But coal is cheap, so it would be difficult for biochar to be competitive "unless society is willing to pay a premium for green coal," Schwartz says.

On the other hand, biochar holds much appeal for agriculture. It improves soil, crop yields and can help control diseases and pests. "It's a great soil amendment," Schwartz says. "It's not a fertilizer, but it helps the soil absorb and retain nutrients, and it improves water retention."

This means farmers can irrigate less often and "there's less runoff laden with fertilizer to go into streams and rivers, causing harmful algae to bloom," he adds. "It puts carbon back into the soil instead of into the atmosphere. Everybody who deals with slash problems on their land loves this."

Schwartz eventually sees a two-sided market developing. "Selling the blankets to landowners so they have something to do with their waste, which solves one problem," he says. "Then, after they finish their forest restoration, hopefully they will be interested in putting the biochar back into the soil. But we also believe there is a much bigger market that will emerge in biochar. We think it will be more broadly used in agriculture."

"There are two sides to generate revenue and support ecological goals," he adds. "One to help landowners get rid of the waste. The other is to create a company around buying the charcoal product for the agricultural business."

Schwartz's students have formed their own startup company, called "Carbon Cultures," which he describes as "a woman and Native American-owned company," adding that it supports the "engagement of communities that traditionally have not been fully represented in engineering research and development."

Currently, the new company will initially offer two-quart bags, enough biochar to enhance about 20 quarts of soil. The company hopes to increase its production capacity in the coming months and work with farmers, ranchers and soil developers to provide enough biochar for larger acreages. They also plan to sell or lease the blankets, and are obtaining feedback from professionals in forest restoration and land management in developing the commercialization of their products.

Their work grew out of an earlier project that began in 2007, also funded by NSF through its Integrative Graduate Education and Research Traineeship (IGERT) program, designed "to bring students out of the lab and into the field where real problems in bioenergy and natural resources take place," Schwartz says.

"I'd felt something was missing," he adds. "Energy is such a huge issue, I felt that students studying small bits in the lab sometimes miss the big picture. How do you grow material? Where does it come from? How does it get to the marketplace? If you are only working on a tiny piece of that, you might ask the wrong questions."

"We spent several years going to several northwest Native American tribes to understand how they were managing their resources, their economic development and their ecological sustainability," he adds. "The tribes are really good forest managers, but one of the things we saw--not just with the tribes, but with all commercial scale timber harvest and forest restoration work--was the tremendous amount of waste wood it generated."

As a result, "we decided to try to find a way to use it, economically, for something that was valuable, profitable and environmentally friendly," Schwartz says.