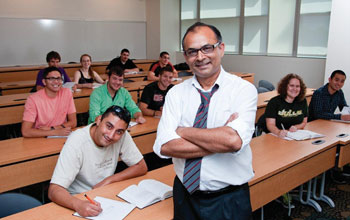 Autar Kaw with students from his numerical methods course at the University of South Florida.

As an undergraduate in India, Autar Kaw experienced the hardship of limited financial resources. Little money meant limited access to textbooks. Because textbooks authored by Americans were costly, the university library purchased copies and then, assigned one textbook to three students at a time.

"If we all had a test on the same day, we would have to schedule time to use the textbook," says Kaw, now a mechanical engineering professor at the University of South Florida (USF).

Spurred by his desire to ensure that all students have access to learning materials for math and engineering courses, Kaw has created a free, open courseware resource called Holistic Numerical Methods. The highly popular site ranked second on all major search engines--Google, Yahoo and Bing--in 2011 and racked up a million page views. Available to students across the globe, the jam-packed site offers video lectures, simulations, textbook chapters, PowerPoint presentations, multiple choice tests and worksheets to learn concepts in numerical methods (an approach that allows scientists and engineers to arrive at approximate solutions for mathematical models of problems they can't solve exactly or that would take too long to solve).

An idea ahead of its time

In the late 1980s, Kaw recognized that computer technology offered a gateway to sharing quality information freely. However, after several unsuccessful attempts to obtain funding for his vision, Kaw put his idea on hold until 2001. As the new decade dawned, several events occurred that encouraged Kaw to try again: The Internet was maturing and fast becoming the new medium for information dissemination; engineering curricula were embracing computational packages such as Mathcad; Microsoft was improving its word processing and presentation software; and Adobe was offering its Acrobat Reader for free. In addition, a major research institution, the Massachusetts Institute of Technology, had announced its own open courseware initiative in which course materials such as syllabi, lecture notes, televised lectures and exams would be available online.

Kaw applied for NSF funding and received the first of four grants. Over the next decade, his NSF funding would total just more than $1 million. The support has enabled him to build the numerical methods site, expand its offerings and to delve more deeply into the impact open courseware has on learning. Over the years the site has benefited from partnerships with colleagues at Arizona State University, Old Dominion University, Florida A&M University, Milwaukee School of Engineering and Mississippi Valley State University.

Dedicated to his students, both on campus and online, Kaw supplements the Holistic Numerical Methods site with YouTube videos on numerical methods concepts and a host of social media components including his "Numerical Methods Guy" blog, a YouTube Numericalmethodsguys channel, and tweets on his Twitter feed. Last year, viewers of the YouTube channel topped 800,000, and Kaw's blog received 120,000 visits. Kaw says he began making video lectures to help students who had to miss class because of work, sickness or other commitments.

"For some undergraduates, if they miss a day they can get lost in a topic. The videos are a great way not to lose those kids," he says.

Kaw supplements his technology-oriented teaching style with more conventional assignments such as writing poetry and essays and composing rap songs.

"These are opportunities for the students to think in another way and to reflect on their work," he says.

For a group of students lagging in the course, a reflection on how they would study differently helped to turn their grades around.

"It's just anecdotal evidence, but they started doing better," says Kaw. "We get so rushed up in today's world that we don't have time to reflect."

Kaw developed a multi-pronged approach to teaching because he believes the best way to learn a subject is to experience it in multiple contexts.

"This [approach] will help students understand the concepts better, and place them into their long-term memory," he says. "I want to make it easy for the students, but I don't want to compromise my high expectations."

To assess whether students understand the material, Kaw uses clicker quizzes in class and problem sets that involve real-life applications of the course concepts. He likes throwing in real-world problems because the students then see that multiple solutions are possible for the same problem. Students also can access a series of self-graded quizzes on each concept.

"The students can attempt these as many times as they want until they master the material," explains Ali Yalcin, USF associate professor in industrial and management systems engineering and one of Kaw's collaborators. He adds that an algorithm changes the numbers in the problems so that the quizzes remain fresh.

Student performance and satisfaction are critical elements in Kaw's work. Over the years, he and his colleagues have developed a variety of tools to measure how well the course is meeting its objectives. They developed a pre-test that students take at the start of the course to evaluate their understanding of the course's concepts, and a post-test administered when the course ends. A final multiple-choice exam is standardized so that Kaw and his team can compare results from year to year. Personal surveys allow students to rate aspects of the course, from readings to lectures, and describe how well each component helped them learn the material.

Kaw's creativity and dedication were recently recognized by the Carnegie Foundation for the Advancement of Teaching and the Council for Advancement and Support of Education when they named Kaw 2012 U.S. Professor of the Year.

In a supporting document for his nomination Kaw wrote, "Treating students with respect and creating a vibrant atmosphere in the classroom is essential. The informal contact during office hours, in hallways, before class starts, after class and at the student organization meetings is critical in building students' interpersonal skills as well as in enhancing the human dimension to the faculty-student interaction."

As a pioneer in open courseware resources, Kaw is mindful of the impact that massive open online courses (MOOCs)--those in which students participate through the Internet--will have on learning and higher education. According to Kaw, the most effective MOOCs will include thoughtful interaction between students and their instructor.

If MOOCs fail to include this component, "we will start losing a lot of students. Many students will get lost in the material and that will be a travesty, especially for students from low-income families."

Kaw is now expanding his research to study what works best in hybrid inverted classroom environments--those that combine video lectures and online discussions with in-class problem solving. Capturing data on student performance and satisfaction will play a key role in determining the best strategies for combining technology and traditional learning environments.