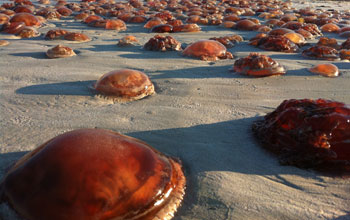 Once a month, on the darkest nights near the new moon, otherworldly beings emerge from Pacific Ocean depths and drift onto the beaches of Hawaii.

Hundreds, sometimes thousands, of these quivering masses of jelly float in with the night tide.

Near shore, time grows short to complete their mission: To reproduce, leaving behind miniature versions of themselves fastened with a glue-like substance to reefs and rocks in the shallows.

Box jellyfish, the invaders are called. Over the past few decades, more and more box jellies are in the waters around Hawaii. The question, scientists say, is where are the jellies coming from?

In the marine science world, it's been dogma that jellyfish are increasing in seas and oceans.

Off the coast of France, for example, aggregations of jellyfish have sunk 500-pound fishing nets. And in Japan, jellies have clogged the water intakes of nuclear power plants.

Humans' expanding influence on the oceans has begun to cause changes. "Blooms" of jellyfish are occurring in response to these effects. Or are they?

Jellyfish on the rise--or on the wane?

"There's a perception that jellyfish numbers are exploding in the world's oceans," says marine scientist Rob Condon of the Dauphin Island Sea Lab in Alabama, "but there's no real evidence for a global increase in jellyfish over the past two centuries."

Results of a study of worldwide jellyfish abundance, led by Condon, were recently published in the journal Proceedings of the National Academy of Sciences (PNAS).

"It's refreshing to see a thoughtful analysis of the 'jellyfish bloom' phenomenon," says David Garrison, a program director in the National Science Foundation's (NSF) Division of Ocean Sciences, which funded the research.

"The findings point out the critical importance of obtaining long-term data to understand the patterns and significance of perceived environmental changes."

The study shows that global jellyfish populations undergo oscillations over decades, including a rising phase in the 1990s and early 2000s that contributed to the perception of an increase in jellyfish abundance.

The previous period of high jellyfish numbers during the 1970s went unnoticed.

"At the time, there was limited research on jellyfish," says Condon, "along with less awareness of global-scale environmental problems, and less information transmitted around the world quickly. We didn't have the Internet."

While there has been no increase in jellyfish blooms over the long-term, the paper's authors say, they detected a hint of a slight increase since 1970.

The trend was countered, however, by the finding that there was no difference in the proportion of increasing versus decreasing jellyfish populations over time.

"Sustained monitoring is required over the next decade to find out if what we're seeing is an actual shift, or if it's part of a larger oscillation," says Condon.

"The research is an important step in our understanding of the complex biological cycles that occur in the oceans," says Henry Gholz, a program director in NSF's Division of Environmental Biology, which also funded the research.

"It demonstrates the critical role of long-term observations in informing society of environmental changes."

The idea of a global increase in jellyfish, says Condon, "was fueled by a few local and regional case studies."

Condon and colleagues say that it's important to sample marine waters over appropriate space and time scales so trends aren't misinterpreted.

"The realization that jellyfish synchronously rise and fall around the world should lead us to search for the long-term natural factors driving jellyfish populations," says Condon.

The ocean brought to life

With tissues made up of 95 percent salts and water, jellyfish are the ocean brought to life.

Washed up on a beach, jellyfish look like ugly gobs of slime. But in the sea, these fragile creatures shimmer with jewel-like radiance.

Their real beauty, though, is their crucial contribution to the functioning of marine ecosystems.

Researchers such as Condon are finding that jellyfish may help us see the complex relationships among species in the oceanic food web.

Jellyfish can live almost anywhere there's water: Under the ice in arctic and Antarctic seas, and even in North American freshwater lakes and streams, where one tiny species is found.

Most jellyfish are propelled by the rhythmic contraction and expansion of an umbrella-shaped saucer, or bell, as well as by winds, currents and tides. Nearly all are part of a drifting community of organisms called plankton, a term derived from the Greek word for wanderer.

Many jellyfish live for just one summer. Before they die in September, females release hundreds of eggs into the water, then males release sperm. The resulting larvae swim to the bottom and attach themselves to hard surfaces. In spring, they bud into tiny jellyfish, and the cycle begins anew.

They prey on a host of microscopic and larger species, and are themselves food for sea turtles and fish such as the mola, or giant ocean sunfish.

"The question has been: Are jellies playing their natural part or hogging the stage?" asks Condon. "Based on recent results, they're doing what jellyfish evolved to do, right on cue."