To Combat Biological Build-up, Engineers Look to Nature for Inspiration 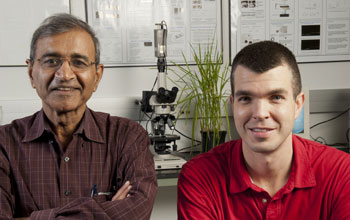 With 3.5 billion years of research and development under her belt, Mother Nature could be considered the world's most experienced biological engineer. Sure, her methods may appear haphazard at times, but her track record of developing organisms that are exquisitely adapted to the tasks required of them is nothing short of amazing.

One task she's been particularly devoted to is finding ways to keep her creations clean of debris and contaminants. It's therefore not surprising that today's engineers look to nature for inspiration when it comes to dealing with "biofouling," or the unwanted build-up of biological material, which plagues a wide range of industries.

A recent study conducted by researchers at The Ohio State University has found that rice leaves and butterfly wings make use of some unique surface characteristics that promote self-cleaning. The researchers believe that incorporating some of these features into man-made products might be key to tackling problems associated with biofouling.

"Living nature is full of engineering marvels, from the micro to the macro scale, that have inspired mankind for centuries," says Bharat Bhushan, senior author of the study and director of the Nanoprobe Laboratory for Bio- and Nanotechnology and Biomimetics at Ohio State.

Consider, for example, that while a ship gets bogged down by barnacles as it crosses the ocean, a shark swimming in the same ocean remains clean as a whistle. One reason for this is that shark skin is composed of a special type of scale covered by riblets that reduce friction as the shark travels through the water. Reduced friction means that water flows more rapidly across the surface, making it difficult for microscopic hitchhikers to grab hold. This phenomenon is called the shark-skin effect. The lotus leaf, on the other hand, maintains its squeaky cleanness with a waxy surface structure that repels water, a property called superhydrophobicity. Combined with low adhesion, this is known as the lotus effect.

The September 2012 study, published in the journal Soft Matter by Bhushan and engineering graduate student Greg Bixler, shows that rice leaves and butterfly wings combine the low drag of shark skin with the superhydrophobicity of the lotus leaf, putting these surfaces at the top of the list of nature-made self-cleaners.

The idea to look at rice leaves and butterfly wings came to the investigators from observing these structures in their natural habitats.

"We noticed that water droplets on rice leaves and butterfly wings roll off effortlessly, and that each remains clean in their respective environment," says Bhushan.

This observation lead the investigators to suspect that, like shark skin and lotus leaves, rice leaves and butterfly wings have special properties that make them particularly resistant to fouling.

Before they could get started, Bhushan and Bixler had to address the fact that both of these structures are incredibly delicate, making them difficult to work with in an experimental setting. For this reason, they began by creating replicas of both surfaces. Silicone was poured over actual leaves and wings, creating a "negative" mold that was used to create a urethane replica better suited to the rigorous tests the investigators had in mind. Some replicas also received a silica coating to replicate the superhydrophobic properties of the natural structures.

The researchers then subjected the replicas to experiments designed to determine how efficiently they moved through air (drag), how well they got rid of contaminants (self-cleaning), how tightly contaminants stuck to the surface (adhesion), and how well they retained or repelled water (wettability). Like shark skin, rice leaves and butterfly wings exhibited low drag and self-cleaning properties. But both of these samples were special in an important way: They exhibited lotus-like properties including superhydrophobicity and low adhesion. This effect was magnified in coated samples, which outperformed uncoated samples in every test.

Bixler attributes these findings to the unique structure of each surface.

"Both rice leaves and butterfly wings contain micro- and nano-sized features that repel and direct water in one direction," says Bixler. "This is accomplished with a combination of grooves and bumps that are invisible to the naked eye."

By showing that rice leaves and butterfly wings combine anti-fouling properties of some of nature's best self-cleaners, Bhushan and Bixler have identified new surfaces that can be used as engineering inspirations for a wide range of industries plagued by biofouling. Preventing the build-up of biological matter on a ship's hull, for example, could increase the efficiency of the ship's movement, ultimately leading to more efficient fuel use. Also, reducing the accumulation of bacteria and other microbes in medical tubing could greatly reduce a patient's risk of infection.

"We are investigating methods to fabricate rice leaf and butterfly wing-inspired films for applications requiring low drag, self-cleaning and anti-fouling," say Bhushan. The investigators hope that the use of such films in various industries, including health care, shipping and advanced manufacturing, will reduce costs and improve quality.