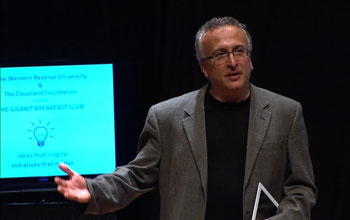 "There is nothing she needs to do, as long as the system is on," says Lev Gonick, vice president for information technology services and chief information officer at Case Western Reserve University. "She just needs to be in the right place at the right time."

In some ways, it's almost better than meeting in person, since this is not just any standard video system.

It is next generation, high-definition, multipoint videoconferencing, with stereoscopic sound, that relies upon high-speed broadband resources and supports full, uncompressed data--meaning it produces images sharper and clearer than those that can be seen with the naked eye.

But to simply call it videoconferencing would be misleading, Gonick says. "It's about collaborating, humans communicating with each other," he says.

It is a brand new "collaborative platform" that, "in terms of the technical experience, is the difference between standard definition and ultra-high definition," Gonick says. "Once you've watched football in high definition--you will never go back."

The system, which is still under study and development, has the potential to revolutionize, among other things, health care delivery, particularly for the homebound, as well as education in the science, technology, engineering and mathematics (STEM) fields. Ultimately, it also could prove valuable in getting treatment to individuals with privacy issues, such as college students experiencing depression or victims of sexual or domestic violence, who need help but may feel reluctant, initially, to seek it in person.

"The immediate public benefit will be enormous," says Marv Schwartz, chief scientist for Case Connection Zone, a research project that is bringing 1 gigabit internet connectivity to the neighborhoods surrounding the university. "The savings to the health care system will pay for the cost of a new national broadband infrastructure many times over."

Schwartz cites, for example, the high number of hospital readmissions for heart failure, which often occur within 30 days of discharge, and "cost Medicare an estimated $6 billion a year, and are largely preventable," he says, adding: "This system will put clinicians in contact with patients in their homes, where they can see them by video, in their own settings. They can immediately see physiological signs, such as weight gain."

Moreover, having such a system "would bring transportation costs to zero," Schwartz says. "For some patients who are not mobile, getting to a doctor's office requires calling an ambulance, and that's a $1,200 round trip. There would be no need for that kind of expense when using this system."

For homebound patients in particular, "doctors can examine all kinds of things--welts on the skin, or lacerations--and they can see some of them better than with their own eyes," Gonick says. "They can help patients manage their medications. Senior citizens have dozens of medications they are trying to balance every day. Rather than ask a patient, whose eyesight may be failing, to read to them what's on the bottle, the doctors actually can examine the writing on the bottles with a remote camera that can zoom in."

Their work is supported by a White House initiative, US Ignite, and the National Science Foundation (NSF), the project's lead federal agency, which aims to realize the potential of fast, open, next-generation, high-speed networks. US Ignite expands upon the NSF-funded Global Environment for Networking Innovation, or GENI, which is laying the technical groundwork for the program.

US Ignite is connecting a series of high-speed broadband resources to establish a "testbed" across universities and cities on a national scale, providing a fast, programmable "virtual laboratory" to allow academic researchers to experiment on future internets.

The Case Western Reserve University research is among the first US Ignite grants funded by NSF through its EArly-concept Grants for Exploratory Research (EAGER) program.

With standard video pictures, raw data typically are compressed from about 1,600 lanes of traffic, or 1.6 gigabits, to two lanes, or 2 megabits, according to Gonick. But the Case researchers "are building the capacity to support full uncompressed data, to transport 1,600 lanes from point A to point B, or from multiple points to one another," Gonick says. "The only limiting physics is the speed of light."

The initial goal is to make it easier for homebound people such as senior citizens or Alzheimer's patients, for example, even young autistic adults, "people who find themselves in a situation where it is not practical, in the middle of a Cleveland winter, to go to a bus stop, wait for a bus, go to the clinic and talk to a doctor for 10 minutes," Gonick says.

The system currently is under study in two Cleveland area neighborhoods that are fully equipped with high-speed bandwidth, including 104 homes in a mixed use community known as Hessler, in the inner city, and a 136 senior citizen residence and retirement home, Judson Manor. "At Judson, we set up 10-15 minute briefings with the doctors, and all they need to do is be sitting on their living room couch," Gonick says.

"The current health care model is clinically based and currently economically unsustainable," Gonick adds. "Our view is that it's a good thing to try to change medical behaviors. This system will allow people to take better care of their health at home, so they don't have to go to a hospital."