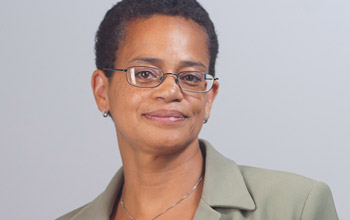 Brenda Philips is based at the University of Massachusetts Amherst.

Tornadoes evolve rapidly, sometimes too quickly for conventional radar to accurately track. But when a violent tornado struck Newcastle, Okla., in May 2011, a town emergency manager had the good fortune to be watching it via a new radar system that delivers data every 60 seconds, instead of the usual five minutes.

Instead of turning south, where the tornado seemed to be heading originally, the twister rapidly shifted north. Because the manager could see this in real time, he was able to dispatch his first responders swiftly, and to the correct location.

"He called us up after this event and told us how glad he was that we had this system going," says Brenda Philips, deputy director of the Center for Collaborative Adaptive Sensing of the Atmosphere, a National Science Foundation (NSF) Engineering Research Center based at the University of Massachusetts Amherst. "He was able to reposition his team to both keep them safe and get them to the right place quickly."

This occurred during a large and serious outbreak of tornadoes in Oklahoma, and two days after a catastrophic tornado struck Joplin, Mo., killing 161 people and destroying a third of the city. "It was a high year for tornadoes," Philips says, but fortunately, for Newcastle, "there were very few injuries and no deaths."

Philips and Michael Zink, assistant professor of electrical and computer engineering at the University of Massachusetts Amherst, are building on the current radar system so it can take full advantage of ultra high bandwidth network to transmit uncompressed radar data to a central computer cluster.

Current conventional radar systems typically generate high bandwidth data compressed from 150 megabits per second to roughly five megabits per second. But when the data are uncompressed, the information is likely to be more accurate, especially with tornadoes, where exact wind measurement is especially important.

Information from the new system comes out faster, has higher resolution and is more geographically specific, Philips says.

"With compression, you are potentially missing things," Zink says. "You might not see the early stages of a tornado. You might miss it entirely. On the other hand, you might receive false alarms, because it's an imprecise way of measuring."

The goal of their current research is to show the benefits of connecting radar systems to ultra high-speed networks to enhance the warning systems for dangerous weather, such as tornadoes and severe storms. This will also benefit aircraft surveillance; for example, identifying and following small, low-flying airplanes, important for drug enforcement and homeland security.

Its widespread use could enable even earlier alerts of severe weather "that can result in making better decisions, reducing injuries, preventing damage and saving lives," Philips says.

Although tornadoes occur in many parts of the world, they are found most frequently in the United States, causing about 70 deaths and 1,500 injuries annually, according to the National Oceanic and Atmospheric Administration (NOAA). Tornadoes arise from thunderstorms, of which there are an estimated 100,000 each year in the U.S., 10 percent of them severe, according to NOAA's National Severe Storms Laboratory.

"Our system would really make a difference everywhere you have super-cell thunderstorms (ferocious thunderstorms that spawn tornadoes), including all of Tornado Alley," Zink adds, referring to a popular nickname for a broad geographic swath of relatively high tornado occurrence in the central U.S. "The system also has benefits for flash floods. We have designed new networks of radars that look much lower in the atmosphere, and can detect these events much better."

They are accomplishing this by designing new detection algorithms that operate directly on uncompressed, high-bandwidth radar data, rather than the compressed data of conventional systems, Zink says.

Their work is supported by a White House initiative, US Ignite, and NSF, the project's lead federal agency, which aims to realize the potential of fast, open, next-generation high speed networks. US Ignite expands upon the NSF-funded Global Environment for Networking Innovation, or GENI, which is laying the technical groundwork for the program. Zink already has been involved in foundational work for GENI.

US Ignite is connecting a series of high-speed broadband resources to establish a "testbed" across universities and cities on a national scale, providing a fast, programmable virtual laboratory to allow academic researchers to experiment on future internets.

The new radar system research is among the first US Ignite grants funded by NSF through its EArly-concept Grants for Exploratory Research (EAGER) program.

Recently, the scientists moved their testbed from southwestern Oklahoma to Dallas/Fort Worth "in order to see the system operate in a more populated area, where the impacts are potentially greater," Philips says. "We will have eight radars in Dallas/Fort Worth, and we are working there with emergency managers and weather forecasters."

The effort is a public/private partnership, with local communities helping to pay for it, supported in part by an NSF Partnerships for Innovation grant. "If we can get multiple stakeholders contributing to the system, then no one entity has to bare the entire cost," Philips says.

The system, still in the research stages, is focusing initially on urban metropolitan areas, although "we already have seen some interest from other locations in the Midwest," Zink says.

Eventually the researchers hope to see the system in full use nationwide. "The ultimate goal is to deploy this system across the whole United States," Zink says.