Animal Attraction: The Many Forms of Monogamy in the Animal Kingdom

A Valentine's Day special on the science of monogamy 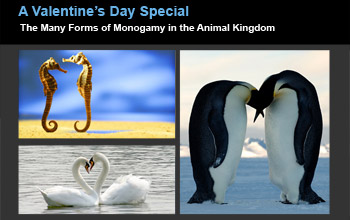 Slide show: The many faces of monogamy.

Ever have a relationship that qualified as "faithless love"? If so, you're in good company: Almost all adults in the animal kingdom have also experienced, if not a faithless love, then at least a faithless pairing.

Faithless pairings are so common in the animal kingdom because only a handful of animal species practice true monogamy--defined as pair bonding between a male and female, which exclusively mate with one another, raise offspring together and spend time together.

All expressions of true monogamy--whether characterized by short-term or long-term pairings--have long been considered to be a rarity in the animal kingdom. Nevertheless, since the advent, in the 1990s, of DNA fingerprinting--which is similar to paternity tests used in the courts--scientists have discovered that true monogamy is even rarer than previously believed.

As it turns out, many species that were once considered to be truly monogamous really practice what is known as social monogamy. This form of monogamy is defined as pair bonding between a male and female, which mate with one another, raise offspring together and spend time together, but may nevertheless occasionally mate outside of their pair bond.

Looking the other way

No one knows for sure. But one theory is that females may tend to pair bond with males that are particularly good providers and offer potential stability, but are lured into extra-pair copulations by males that offer "something else" not provided by their pair bonded partner.

That "something else" may be superior genes, as reflected in the male's physical features, such as his weight or resistance to disease, or his control of particular resources, such as a large territory.

On the other side of the pair bond, males may seek extra-pair copulations in order to increase their chances for reproductive success--even if it turns out that their pair bonded partner is sterile or genetically unfit in some way; through promiscuity, a male may fertilize multiple females, and thereby avoid putting all of his genes in one basket.

How rare is rare?

Some statistics on the frequency of monogamy in the animal kingdom:

The ultimate purpose of life for each individual animal on Earth is to reproduce, and each individual that reproduces successfully helps perpetuate its species. Building on these facts, some scientists believe that monogamy evolved in species whose members are more likely to achieve reproductive success through pair bonding than through promiscuity.

Such species may include those whose populations are relatively small and dispersed: in such cases, the male's investments in monogamous pair bonding may yield more offspring than would his investments in repeatedly searching for hard-to-find females.

Another theory: Monogamy may have evolved in some species in order to support their special caretaking needs. Consider, for example, emperor penguins.

Until an emperor chick becomes independent of its parents, it must be protected in its colony from the harsh Antarctic elements and from predators by one parent, while the other parent travels back and forth to distant seas to feed itself and gather food for the chick--dual responsibilities that a single mother could not possibly fulfill on her own.

Therefore, monogamy may have evolved in emperors in order to support the intense parental cooperation needed by emperor chicks. This theory is supported by the fact that once emperor chicks become independent of their parents and thereby outgrow their need for cooperative parental caregiving, the overwhelming majority of emperor parents (about 85 percent) permanently part ways. (Adult emperors practice serial monogamy, and usually form a new pair bond every breeding season.)

Also, some scientists believe that monogamy may have evolved in some species because their young can be cared for by both of their parents. Such species include bird species whose young survive on food brought to them by both of their parents, which are equally equipped for the task. Because the monogamy of such species supports fatherly caregiving, and thereby promotes reproductive success, the evolution of such species apparently favored some form of monogamy, as the theory goes.

By contrast, baby mammals must be fed via breast-feeding--a need that obviously can only be fulfilled by females. So, almost by definition, the males of most mammal species are generally unequipped to help feed their young. Therefore, such species would not necessarily benefit from a social structure that supports fatherly caregiving, and so their evolution would not necessarily have favored monogamy, as the theory goes.

However, theories about the evolution of monogamy that are based on its support for fatherly caregiving are countered by the fact that the males of some monogamous species do not typically help care for their young--even though the reverse is apparently true: All species in which males typically help care for their young are monogamous, as far as we know.

The joy of monogamy

While environmental factors may influence the evolution of monogamy, so too may genetic factors. Some possible genetic influences on monogamy have been discovered through recent research on prairie voles, which form lifelong social attachments. Specifically, this research identified special hormone receptors located in the reward centers of the brains of male prairie voles. Such special receptors may give the voles a sense of pleasure from monogamy and taking care of young, and thereby help promote these behaviors.

This research also involved transferring the special hormone receptors of prairie voles to other vole species that are promiscuous and do not form social attachments. The result: The promiscuous voles became monogamous, like prairie voles.

Probably because varied and complex combinations of genetic and environmental factors influence the reproductive behavior of each species, virtually every species that practices true monogamy or social monogamy expresses their monogamy in a unique way. (See slide show.)

Learn more about the biology of love and other animal emotions in an online chat featuring NSF program director Diane Witt.

Related Websites
NSF press release on research on monogamy in voles: http://www.nsf.gov/news/news_summ.jsp?org=NSF&cntn_id=104238&
Online chat about the science of love and other emotions in the animal kingdom featuring NSF program manager Diane Witt: http://news.sciencemag.org/sciencenow/2012/02/live-chat-the-science-of-love.html