Producing Solar Energy Materials That Are Affordable, Efficient and Flexible

Researcher working toward making solar cells that can be used in computer bags, clothing, walls and more 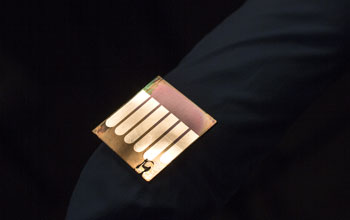 Most portable electronic devices need to be charged periodically. Typically, this means plugging them into an electrical source--and being patient. Imagine how convenient it would be if you could just slip that cellphone into your pocket and have it charge every time you went out into the sun.

Jinsong Huang, assistant professor of mechanical and materials engineering at the University of Nebraska-Lincoln, believes that day will come, and he is working to ensure it happens sooner rather than later.

"We really need to increase the availability of renewable energy sources," says the National Science Foundation- (NSF) funded scientist. "Fossil fuels are finite, and they aren't good for the environment. We have a never-ending supply of solar energy, which is abundant, free and clean, but we have to use it in ways that are more efficient and more affordable than what is currently available."

Huang's research goal is to ensure that almost any surface, including windows, walls, and even computer bags and clothing, will be specially treated and have the ability to tap into the power of the sun, providing energy that is just as efficient and much less expensive than the solar panels in use today.

"The idea is to put it on the surface of something we already have--a wall, for example, or articles of clothing, or on the device itself," he says. "You could leave the device sitting in the sun. Or clothing could be used to charge a device in your pocket."

The current market is dominated by semiconducting silicon solar cells sandwiched between two metal electrodes that create an electric field. One electrode is transparent, allowing light to pass through it. The photons in sunlight knock loose the semiconductor's negatively charged electrons, which migrate within the system's electric field to form a current that produces electricity. The system is efficient, but limited in its applications and very expensive.

Scientists have been trying to replace current silicon cells with organic polymers, or plastics, which are less expensive and have more flexible applications, but are not as efficient.

Organic polymer solar cells are cheaper to make than silicon-based cells because the material and fabrication costs are less. These polymers can be coated on many surfaces in the same way as spray paints and inkjets, allowing manufacturers to produce solar cells as quickly and easily as printing off the daily newspaper, according to Huang.

The material's pliability also could lead, ultimately, to replacing large, expensive solar panels atop buildings and poles. Instead, future solar cells could find their way into clothing, laptop bags and tents, or even pasted onto building windows.

Huang's team is trying to enhance their efficiency by placing a layer of ultrathin ferroelectric polymer, a building material often used in insulation, between the polymer and each electrode.

"At the first glance, it is surprising that an insulating plastic material can be used to enhance the efficiency of a polymer solar cell, because generally it makes the device worse," Huang says. "Our innovation lies in utilizing the large, permanent electrical polarization of a ferroelectric polymer to increase a solar cell's internal electric field, thus generating more electricity.

"We designed a unique device structure so that these insulating layers facilitate the generation of more electric currents instead of less," he adds. "Also, this method won't add any cost to the polymer solar cells."

His work demonstrating this idea appeared in a recent issue of the scientific journal Nature Materials.

Currently, the energy conversion efficiency of silicon semiconductors is around 20 percent, meaning, for every 100 watts of sun energy, a solar cell produces 20 watts of electricity. For ferroelectric polymers to become commercially viable to compete with silicon solar cells, "we need to get the energy conversion efficiency up to 15 or 20 percent," Huang says. "We are at about 8 to 9 percent now, which is already very good, considering the amount of cost reduction."

Huang is conducting his research under an NSF Faculty Early Career Development (CAREER) award, which he received in 2012. The award supports junior faculty who exemplify the role of teacher-scholars through outstanding research, excellent education and the integration of education, and research within the context of the mission of their organization. NSF is funding his work with $400,000 over five years.

The award also supports educational outreach. As part of this, Huang is preparing a workshop for Nebraska's high-school students to teach them about solar engineering, and to promote engineering as a career choice. Also, he is helping produce demonstrations about solar energy and engineering at the University of Nebraska State Museum.

To be sure, "solar energy is nothing new," Huang says. "We have all these products on the market, but we can't use them as broadly as possible because they are still too expensive. The products are too expensive because of the materials they use. The sun is free, but to harness its energy is not free. Our goal is to produce a material that is both affordable and efficient, as well as flexible to use, so that you could put it on the surface of a device, paint buildings with it--or actually even wear it."