Virus may have led to widespread disease in Myanmar in 2001 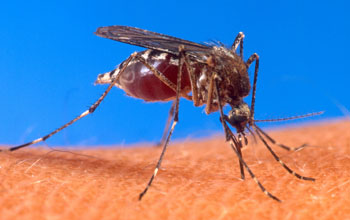 It's 2001 in Myanmar (formerly known as Burma), a country in Southeast Asia. Almost 200 people have died, and more than 15,000 are ill--all having contracted dengue fever.

Dengue is a disease transmitted by mosquitoes and caused by four types of the dengue virus. Infection may not result in symptoms, or may cause mild, flu-like illness--or hemorrhagic fever.

In 1998, a pandemic of dengue resulted in 1.2 million cases of dengue hemorrhagic fever in 56 countries.

In Myanmar, dengue is endemic. The disease has occurred there in three- to five-year cycles since the first recorded outbreak in 1970. Each one has been more deadly.

What caused the widespread infection in Myanmar in 2001, a disease that resulted from one type of dengue virus, DENV-1? For more than a decade, researchers have been working to solve the puzzle.

All viruses not created equal

Could the DENV-1 in Myanmar have been different in some way, perhaps "defective"?

Defective viruses result from genetic mutations or deletions that eliminate essential functions. They're generated in viruses with high mutation rates, but were believed to be unimportant.

But it now appears that defective viruses may be able to play a critical role in the spread of disease.

In a paper published this week in the journal PLoS Pathogens, scientists funded by the National Science Foundation (NSF) report a significant link between one such defective virus and the high rate of transmission of DENV-1 in Myanmar in 2001.

"The idea has always been that defective viruses are either meaningless or detrimental," says James Lloyd-Smith, an ecologist and evolutionary biologist at the University of California, Los Angeles (UCLA).

"We've found the opposite--that the defective virus is actually helping the normal, functional virus. It's bizarre and hard to believe, but the data are the data."

"We've shown that the defective virus not only goes with the normal virus, but increases the transmission of that virus," says scientist Ruian Ke, also of UCLA.

The research team--James Lloyd-Smith; Ruian Ke; John Aaskov, a virologist at Queensland University of Technology in Brisbane, Australia; and Edward Holmes, a biologist at the University of Sydney--found that the presence of a defective DENV-1 virus may have led to a spike in dengue fever cases in Myanmar during 2001-2002.

"The causes of epidemics are much more complicated than we thought," says Sam Scheiner, NSF program director for the joint NSF-National Institutes of Health Ecology and Evolution of Infectious Diseases (EEID) Program. At NSF, EEID is funded by the Directorates for Biological Sciences and Geosciences.

In addition to EEID, the research was supported by NSF's Advancing Theory in Biology Program.

"Pathogens can depend on the presence of other microbial species or, as in this case, other varieties of the same species," says Scheiner. "Understanding these interactions is critical for predicting when the next epidemic might occur--and how to prevent it."

In the study, Ke designed a mathematical model to learn how the defective DENV-1 virus interacted with the normal virus.

Ke discovered that the lineage of defective viruses emerged between June 1998 and February 2001; it spread through the population until at least 2002.

The following year, the lineage appeared in the South Pacific island of New Caledonia, carried there by a mosquito or a person.

The scientists analyzed the genetic sequences of the defective and normal viruses to estimate how long the defective virus had been transmitting in the human population.

"We can see from the gene sequence of the defective version that it's the same lineage, and is a continued propagation of the virus," says Lloyd-Smith.

"From 2001 to 2002, it went from being quite rare to being in all nine people we sampled that year," says Lloyd-Smith. "Everyone sampled who was getting dengue fever was getting the defective version along with the functional virus.

"It rose from being rare to being very common in just one year."

Most surprisingly, say the scientists, the combination of the defective virus with the normal virus was "more fit" than the normal dengue virus alone.

"What we've shown is that this defective virus, which everyone had thought was useless or even detrimental to the fitness of the functional virus, actually appears to have made it better able to spread," Lloyd-Smith says.

Ke calculated that the defective virus makes it at least 10 percent more transmissible. "It was spreading better with its defective cousin tagging along than on its own," says Lloyd-Smith.

It takes two (viruses) to tango

The functional virus and defective virus travel in unison. The two transmit together in an unbroken chain.

"That's not just a matter of getting into the same human or the same mosquito, they need to get into the same cell inside that human or mosquito in order to share their genes, and for the defective version to continue hitchhiking," says Lloyd-Smith.

"We're gaining insights into the cellular biology of how dengue is infecting hosts. It must be the case that frequently there are multiple infections of single cells."

The defective virus appeared one to three years before the major epidemics in 2001 and 2002.

"One could imagine that if you build an understanding of this mechanism, you could measure it, see it coming and potentially get ahead of it," says Lloyd-Smith.

Might defective viruses play a role in the transmission of the flu, measles and other diseases?

"There are a few signs that this phenomenon may be happening in other viruses," Lloyd-Smith says.

"We may be cracking open the book on the possible interactions between normal, functional viruses and the defective ones that people thought were just deadends.

"These supposedly meaningless viruses may be having a positive effect--positive for the virus, not for us.

"There's great variation from year to year in dengue epidemics in various locations, but we don't understand why. This is a possible mechanism."

Why would a defective virus increase transmission of a disease?

"It might give the virus flexibility in how it expresses its genes, and may make it more fit and better able to reproduce under some circumstances," Lloyd-Smith says.

A second idea is that the defective virus may be interfering with the disease causing virus, making the disease less intense.

People then have a milder infection, and because they don't feel as sick, they're more likely to go out of their homes and spread the disease.

"We were able to show that this defective virus transmitted in an unbroken chain across this population in Myanmar for a year and a half," Lloyd-Smith says.

"Without gene sequencing, we wouldn't have been able to establish that."

The biologists hope their work will help turn the tide of the next deadly outbreak of dengue in Myanmar--and in other tropical countries around the globe.