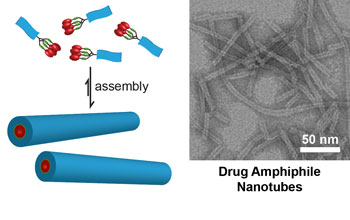 In recent years, many popular cancer treatments have been using nano, that is, tiny particles of polymers or carbon-based materials, to transport chemotherapy drugs to tumors in a way that specifically targets cancer cells, while sparing normal cells. But this approach has several problems.

Among other things, it is difficult to control the amount of a drug loaded into the carrier, and, in fact, all too often there is much more "carrier" material than drug. As a result, the drug quantity often varies from particle to particle, meaning that the chemotherapy dose delivered may be inconsistent or uneven. Also, the synthetic material that encloses and delivers the drug may itself be toxic, causing undesirable side effects.

The ideal scenario would be to find a way to turn cancer drugs into their own delivery systems, and eliminate the synthetic vehicles altogether.

Honggang Cui, an assistant professor of chemical and biomolecular engineering at Johns Hopkins University, is trying to do just that by transforming the drug molecules in a way that enables them to become their own carriers, a process known as self-assembly.

"We want to use the anti-cancer drug to make nanoparticles out of itself," says Cui, also an affiliated faculty member of the Johns Hopkins Institute for NanoBioTechnology. "The challenge is: How do we do that?"

The National Science Foundation (NSF)-funded scientist and his research team are using new molecular engineering techniques they hope will prompt the drug molecules to organize themselves into discrete and isolated nanostructures, rather than remaining in their present "bulk" form.

If Cui is successful, the work potentially could improve cancer chemotherapy by increasing the efficacy of treatment, and reducing its adverse side effects.

Currently, "in one particle you may have 2 percent drug loading, and in another, maybe 10 percent, and in another, nothing, no drug at all," he says. Having the drugs transport themselves "will help the clinical outcome," Cui adds. "You won't get too much or too little of a drug. You'll get the right dose."

In order to turn these drugs into their own nanoscale delivery systems, they must become amphiphilic, meaning they must have properties that both like and dislike water.

"The water-dislike segment will drive the molecules to come together to form a molecular cluster, or a nanostructure, in a way to minimize their contact with water molecules, while the water-like segment will keep the nanostructure soluble in aqueous solution and prevent them from growing into larger objects," Cui explains.

Few drugs have this duality when it comes to water. "Most are very hydrophobic; they have poor water solubility," he says.

To make water-hating drugs capable of also loving water, the researchers are experimenting with water soluble peptides, which are compounds that consist of two or more amino acids, trying to incorporate them into the drugs via biodegradable linkers, that is, chemical bonds that act as a bridge between the water-loving peptide and the water-hating drug.

When it works, "the drug can become self-assembling," Cui says. "When the drug gains the ability to self-assemble, we want to play with the peptide sequence to gain control of its size, shape and surface chemistry.

"The peptide will add not only the water-loving segment for self-assembly, but also new features that allow for effective regulation of their assembly into different sizes and shapes," he adds. "They could be bioactive, and present signals for specific tumor targeting."

The hope is to produce anti-cancer drugs that are supramolecular nanostructures, or particles that are made up of more than one molecule, which "have high drug loading and fixed drug loading," Cui says.

Cui is conducting his research under an NSF Faculty Early Career Development (CAREER) award beginning this year. The award supports junior faculty who exemplify the role of teacher-scholars through outstanding research, excellent education, and the integration of education and research within the context of the mission of their organization. NSF is funding his work with about $500,000 over five years.

Cui and his team recently published results of their work in the Journal of the American Chemical Society,  demonstrating the principle of constructing self-delivering supramolecular anticancer drugs. Their work produced nanofibers and nanotubes formed by self-assembly of peptide-anticancer conjugates.

As part of the grant's education outreach, Cui is planning to invite local high school and middle school students to spend time in his lab.

"Drug delivery is inherently a multidisciplinary field that offers tremendous opportunities for education at all levels," he says. "We particularly want to engage inner city public school students to learn about drug delivery systems, and the best ways to improve cancer treatment."

While his ideas are still a long way from clinical use, Cui believes ultimately it will be possible to turn drugs into molecular building blocks that will act as their own delivery systems.

"I do not see any reasons why these self-delivering drugs cannot be translated into clinical settings once we figure out ways to manipulate their self-assembly behavior," he says.