Researchers are giving new meaning to the old adage: "mind over matter" 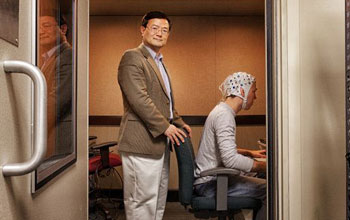 A team of scientists and engineers at the University of Minnesota is giving new meaning to the old adage: "mind over matter."

Led by Bin He, Ph.D., director of the Biomedical Functional Imaging and Neuroengineering Laboratory, the team has created a non-invasive brain-computer interface (BCI) that could one day restore mobility and independence to individuals with amputated limbs, paralysis and other impairments that prevent or limit normal movement. With the help of this interface, volunteers have been able to precisely control the flight of simulated and small model helicopters using only their minds.

While mind-reading sounds more like science fiction than science fact, researchers have been pursuing this type of technology for the past several decades. Recent advances have allowed quadriplegic patients to control a wheelchair, eat chocolate and drink coffee, all without lifting a finger.

The most successful BCIs developed so far are those that rely on electrodes surgically implanted in the brain. This is because the electrical activity generated by a single thought is extremely weak: The further you get from the signal, the more likely that it will be drowned out by the steady hum of activity in the brain.

The drawback is that this approach is incredibly invasive. The medical risks associated with brain surgery and chronic brain implants are not insignificant, particularly for individuals whose health is already compromised by an injury or paralysis.

Now imagine if a non-invasive approach could yield the same crisp signal, making it possible for individuals to navigate and interact with the environment without undergoing brain surgery.

For He and his colleagues, that is the ultimate goal.

In 2011, He's team showed that it was possible for volunteers outfitted with a specially designed cap containing electroencephalography sensors to fly a virtual helicopter in real-time using only their minds.

Electroencephalography has been around for decades, but until recently, it could only be used to record brain activity. It couldn't provide the high resolution necessary to effectively decode what the signals meant. Several years ago, He's team began pairing these recordings with other technologies, including functional magnetic resonance imaging (fMRI). By combining the information provided by the different technologies, the researchers were able to detect the individual signals with better resolution, making it possible to decode them.

In the 2011 study, volunteers were asked to steer a virtual helicopter through a series of rings that appeared on the screen in front of them. The investigators wanted to determine how well the sensors could detect intended movement. The volunteers flew the virtual helicopters through more than 85 percent of the rings, a feat that He says is very encouraging.

"To my knowledge, this was the first time anyone had used a non-invasive approach to simulate movement in three dimensions," says He. "As you can imagine, the results were very exciting to us."

For their most recent experiment, He's team has upped the ante, replacing the computer-simulated helicopters with small, remote-controlled ARDrone quadcopters.

In this experiment, volunteers were required to fly quickly and continuously through two suspended foam rings as many times as possible within four minutes. The volunteers guided the quadcopter based on video feedback from a forward-facing camera mounted on the hull.

"We wanted to show that it was possible to control an actual device, moving in real time and space," says He.

The results, presented in May 2012 at the World Congress on Medical Physics and Biomedical Engineering, are comparable to those seen with the virtual helicopters. Subjects were able to make as many as five consecutive passes and to successfully fly through more than 74 percent of the rings during the four-minute period.

He says the reason the team has focused on flying helicopters as opposed to, say, controlling a wheelchair or moving an artificial limb, is two-fold.

For one, the helicopter serves as a "proof of concept that a non-invasive BCI can be used to control a multi-dimensional system," says He. In other words, the helicopter is an easy way to demonstrate that the BCI does, in fact, work.

More importantly, however, He hopes that using the helicopter, instead of an assistive device, will help people think about the broad range of applications this technology could have.

A high-quality, non-invasive BCI could augment the natural capabilities of professionals such as pilots and surgeons, while providing new challenges and opportunities for athletes and video gaming enthusiasts, He says.

"An obvious application of this technology is for individuals whose movements are compromised by injury or disease," he says. "The reality is that this could also potentially enhance the quality of life for people in the general population."

Note: Text and image in this article are not to be used by any entities other than LiveScience.com and NSF.