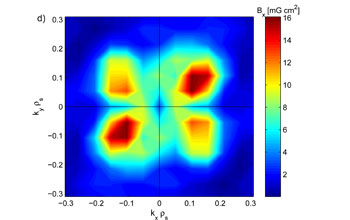 
This animation shows the fundamental interaction underlying turbulence in space.

Space weather is driven by the sun, which has a continually changing magnetic field. When this field accumulates excess energy, it can erupt and send energetic particles into space, sometimes toward Earth. Scientists believe that such violent emissions of charged particles, known as coronal mass ejections, are in part fueled by gusty space winds, or turbulence.

Scientists have known of the existence of space turbulence, but didn't really understand its properties, or how it works--until now. Researchers, led by the University of Iowa (UI) and funded by the National Science Foundation (NSF), recently measured space turbulence directly for the first time in the laboratory and finally were able to see the dynamics behind it.

Space turbulence is not the same as Earth's turbulence, the sensation people experience when they are flying or sailing. Unlike wind gusts that create air and water turbulence on Earth, it turns out that space turbulence--also known as plasma turbulence--results from the interaction of so-called Alfven waves, often described as resembling waves that run along a stretched piece of string.

"If you pluck a string, you send waves up and down the string," says Gregory Howes, assistant professor of physics and astronomy at UI, who led the research team. "Alfven waves are just like that, except that the string is a magnetic field and the tension is magnetic tension."

It is critically important to understand coronal mass ejections because they have the potential to cause harmful and dramatic effects if they strike the Earth's own magnetic field. They could cripple space and satellite systems, GPS, military satellites and the power grid, among other things.

"The surface of the sun is about 6,000 degrees Celsius, but if you go into the solar corona, it's about 1 million degrees," Howes says. "We don't understand why that is--what leads to this very hot plasma in the solar corona. The theory is that turbulence plays a very important role. And it's those high temperatures that are responsible for the generation of solar wind. The entire sun is a turbulent ball of plasma. Activity on the sun can generate big blobs of plasma launched from the sun that will collide with the Earth's magnetic field, resulting in some pretty serious consequences."

About 500 magnetic storms occur during a typical 11-year solar cycle, and already have caused damage. In March 1989, for example, a solar storm caused the entire Quebec power grid to collapse in less than two minutes, affecting 6 million people in the middle of a Canadian winter. A 2003 Halloween storm prompted a massive blackout in the Northeast, and extensive satellite problems, including the loss of the $450 million Midori-2 research satellite.

The worst solar storm in history occurred earlier, in 1859, when a magnetic explosion on the sun, known as the Carrington Event, after the British astronomer who identified it, prompted a worldwide breakdown in communication systems. In those days, however, the major casualties were to telegraphs--primitive compared to the elaborate electronics currently in use.

An event of that magnitude today could prove disastrous.

"A doomsday scenario could knock out power for months," Howes says. "Imagine life without electricity for months. It would change life as we know it. It's very real, and it could happen. It's only happened once before in history, and that was before we had this extensive power grid, and the world is very different today."

Understanding how space turbulence works "may tell us how these coronal ejections occur in the first place, and may give us enough information to predict when one is coming and protect against it," he adds.

To see how Alfven waves produce turbulence, the researchers took a plasma cylinder, 18 meters long and one meter in diameter, and recreated Alfven waves in the lab, launching two along the cylinder--one from the top going down, and one from the bottom going up.

"When those two waves crossed through each other, they generated a third Alfven wave," he explains. "We were able to measure it and determined that it had all the properties we expected it to have. We showed that the interaction of two Alfven waves will create a third. This is the fundamental building block of space turbulence, which consists of thousands of these building blocks."

The National Science Foundation (NSF) and the Department of Energy (DOE) funded this experiment and others involving plasma turbulence with a $478,762 grant awarded in 2010 for three years from its NSF/DOE Partnership in Basic Plasma Science and Engineering. The research was conducted at the Large Plasma Device at the University of California, Los Angeles (UCLA). Howes' collaborators include D.J. Drake, K.D. Nielson, Craig Kletzing and Fred Skiff, all of UI, and T.A. Carter from UCLA.

Howes is conducting his larger body of research--trying to gain a broad understanding of solar wind turbulence using analytical theory and supercomputer simulations--with an NSF Faculty Early Career Development (CAREER) award, which he received in 2011. The award supports junior faculty who exemplify the role of teacher-scholars through outstanding research, excellent education and the integration of education and research within the context of the mission of their organization. NSF is funding his work with about $1.1 million over five years.

Howes is conducting numerical simulations on some of the world's fastest supercomputers to add to his body of research on plasma turbulence and, as part of the educational component of his CAREER award, has established the Iowa High Performance Computing Summer School. Each summer, 16 graduate students selected from Big Ten conference universities attend an intensive, one-week course on high performance computing at the UI.

Howes and other computing experts from across the country teach the course where, among other things, students engage in hands-on activities designing and using supercomputing algorithms. The summer school "trains graduate students in the fundamentals of supercomputing, a background that is absolutely essential for the next generation of scientists and engineers to use effectively, the cutting-edge facilities at the nation's supercomputing centers," Howes says.

Moreover, "only with a combination of experimental, theoretical and numerical efforts can we hope to understand the nature of turbulence in space, with the potential to solve some of the long-standing mysteries of the solar system and the universe," he adds.