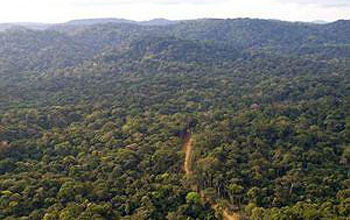 Nouabale-Ndoki National Park is a tree-dotted enclave in Central Africa's Republic of Congo. Heavy logging surrounds the park, but it still has one of the largest intact forests in Africa. In recognition, it recently became a UNESCO World Heritage Site.

Trees--thousands of them--make up a forest. How did Nouabale-Ndoki's trees become so numerous, and how do they stay that way?

The answer, say biologists, lies far below the tree canopy, in the soil where seedlings sprout.

Today in the journal PLOS ONE, scientists report results of an extensive seedling experiment in Nouabale-Ndoki National Park.

The research, which involved sowing 40,000 seeds of five tree species, is a new look at "seeing the forest for the trees."

The findings, which show what limits seedling growth, are important to reforestation efforts in areas that have been logged.

Every tree can produce hundreds of thousands of seeds in its lifetime, but on average, only one seed survives to adulthood, says John Poulsen of Duke University, a co-author of the journal paper.

Other paper co-authors are Connie Clark, also of Duke, and Doug Levey, formerly of the University of Florida and now a program director in the National Science Foundation's (NSF) Division of Environmental Biology.

Which seeds have the best chance of making it to old age?

"There are basically two ways to look at successful seedling recruitment [survival]," says Levey. "Species may be seed-limited or establishment-limited."

A tree species is seed-limited if its ability to grow is determined by whether its seeds reach a particular location on the ground. The seeds may arrive on the wind or simply by falling from trees.

To test the importance of these two limitations on seedling recruitment, the scientists sowed tens of thousands of seeds.

They chose the species randomly, which allowed the results to be generalized to all tree species, not just the most common ones, says Poulsen.

The seeds were planted in different amounts in plots that stretched across an area the size of the state of Rhode Island.

Latter-day Johnny Appleseeds, the researchers couldn't do it alone, however.

"We hired a small army of indigenous, Mbendzélé hunter-gatherers," says Clark. "These families could easily locate seeds, and we were the beneficiaries of their intimate knowledge of the forest's natural history."

After the seeds were planted, the ecologists watched them grow into seedlings over two years.

They found that only a small fraction of seeds, some 16 percent, became seedlings. An even smaller amount, about 6 percent, survived to reach their second birthdays.

When numbers of seeds were at one end of a spectrum--rare or abundant--the trees' recruitment was seed-limited.

"When seeds were at intermediate densities," says Levey, "the chance of recruitment was influenced by environmental factors such as soil type and sunlight."

Not that different from our changing needs for the right nutrients and enough light as we reach our sunset years.