Summertime: Hot Time in the City

Parks are islands of coolness in cities' urban heat 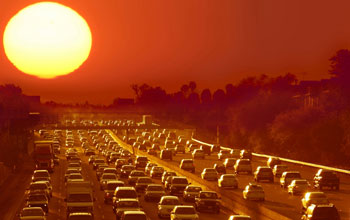 In summer, extreme heat events are on the way in cities like Phoenix.

It's the first day of summer, a hot time in the desert city of Phoenix. And in cities across the United States--and the Northern Hemisphere.

Heat islands, as these urban hot spots are called, are metropolitan areas significantly warmer than surrounding rural areas. Why?

"Us," says sociologist Sharon Harlan of Arizona State University (ASU). "It's all due to the effects of humans. We've modified the surface of the land in ways that retain heat."

Urban heat islands are the result. Soil and grass have been replaced with materials such as asphalt and concrete that absorb heat during the day and re-radiate it at night, causing higher temperatures.

Summer in a blistering desert

They're conducting the research via a National Science Foundation (NSF) Coupled Natural and Human Systems (CNH) grant. CNH is one of NSF's Science, Engineering and Education for Sustainability, or SEES, programs.

"Cities can be hot and uncomfortable places for the people who live in them, with some populations especially vulnerable to health problems from urban heat," says Sarah Ruth, CNH program director in NSF's Directorate for Geosciences.

"The city environment and its human inhabitants form a complex system with multiple connections. These researchers have uncovered important information about this system and the interactions among its components.

"The results suggest ways city officials and residents can work together to create places where fewer people suffer the effects of extreme temperatures."

What's one of the answers? Park cool islands, found the scientists.

They evaluated the effects of plants' cool greenness on a Phoenix inner-city park.

The results were recently published in the journal Urban Ecosystems. Along with Harlan, co-authors of the paper, all from ASU, are Juan Declet-Barreto, Anthony Brazel, Chris Martin and Winston Chow.

They're also working through the NSF Central Arizona-Phoenix Long-Term Ecological Research (LTER) site, one of 26 such NSF LTER sites across the nation and around the world.

They found that the air beneath and around "canopied vegetation"--trees--was cooler than the surroundings.

Trees also reduce hot air by turning water from liquid to gas inside their leaves. "Temperatures then fall in the immediate environment," says Martin.

It all adds up to a park cool island. "Park cool islands are usually found in irregular patterns in a city," Declet-Barreto says. "They're nested within warmer spots."

The team studied the role of park cool islands in a low-income, ethnic minority community in inner-city Phoenix.

The area is called the Latino Urban Core. It's bounded by industrial land to the north, south and east and an interstate highway to the west. The neighborhood's main feature is an electric utility company easement currently used as "linear park space almost entirely devoid of vegetation," states the Urban Ecosystems paper.

The Latino Urban Core's sparse vegetation is mostly in residents' yards. Patches of exposed soil with nothing growing on them are scattered across vacant lots, yards and the grounds of the "linear park."

Inner-city green space--lacking in Phoenix's Latino Urban Core--is a crucial component of urban heat island mitigation, Declet-Barreto says. "But it's made more difficult by ongoing debates over urban amenities like parks and the needed resources, such as water, tax dollars, local government will and regular maintenance."

Minority and low-income communities are increasingly addressing such disparities by demanding a more equitable distribution of urban amenities, such as green spaces like parks.

Finding ways to offset high temperatures in desert cities where the weather is chronically hot, says Harlan, is critical.

Extreme heat, scientists have found, is a threat to human health, increases atmospheric pollutants and energy and water use, alters regional hydrology, and affects interactions between humans and ecological processes.

"The problem of heat-related deaths and illnesses is very serious," says Harlan. "Each year, heat fatalities in the U.S. happen in greater numbers than mortality from any other type of weather disaster." High heat wave events--unexpected and long-duration heat waves--are becoming more common in cities like Phoenix, Chicago and Paris.

Climate change and rapidly growing cities are likely to fuel more such events.

"Our research suggests that climate intervention strategies should be targeted at the neighborhoods and population groups that are most vulnerable to environmental hazards like extreme heat events," says Harlan. "We hope our results will be used in better decision-making about climate adaptation in cities."

Greening parks is an intervention strategy, she says, for urban heat island mitigation that could be supported with public resources.

"If targeted to low-income neighborhoods where vulnerability to heat is greater," says Harlan, "it would address an environmental inequity and provide better ecosystem services for these neighborhoods."

One antidote to an urban heat island, it turns out, is another island, a place filled with shade trees and lush growth: a park cool island.