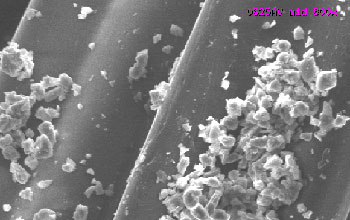 A microscope image of rug fibers with deposited test particles.

Most people worry about the quality of the air they breathe outdoors, while giving little thought to the contaminants that may be circulating in their own homes.

Yet, with only a few exceptions, such as certain urban environments, "outdoor air is cleaner than indoor air," says Andrea R. Ferro, an associate professor in the Department of Civil and Environmental Engineering at Clarkson University.

"People spend most of their time indoors or in transit--only about 5 percent of peoples' time in the United States is spent outdoors--and indoor pollutants' emissions are 1,000 times more likely to be inhaled than outdoor emissions," she adds.

These include particles with potential health consequences, such as house dust, animal dander, pesticide residues from indoor applications or tracked in from the outside, flame retardants from various household products, phthalates, which are substances used in plastics to make them flexible, bacteria and viruses. Additionally, there also are such particles as skin cells, textiles or minerals brought in from outside dirt.

In short, "there are lots of things in there," Ferro says.

Ferro is studying particle re-suspension, that is, the makeup of particles that have landed on indoor surfaces, then later detached--by a breeze or cleaning or even foot traffic--to reenter the indoor air stream. "We are looking at how these particles move in an indoor setting," she says.

Specifically, she and her research colleagues are examining the texture both of the particles themselves and the surfaces where they adhere. Their goal is to better understand the dynamics of the entire cycle, including the adhesive forces that allow the particles to stick to surfaces, and the kinds of external forces that detach them, putting them back into the air.

Most importantly, "we are developing tools to predict exposure based on [indoor] environmental conditions, so you can predict what they can be," she says.

The data they gather ultimately could provide insight into developing new materials for indoor surfaces, such as flooring, and improving other systems that are involved, such as ventilation.

"We are looking at specific particles, like bacteria or chemical and biological agents," she says. "This information could provide guidance, for example, for hospitals, if you are trying to reduce exposure to bacteria that end up on surfaces. First, it's important to understand the source, so you potentially can change behavior. But if you want to reduce the source, you could change materials or behavior or ventilation. This research, for example, could result in improving conditions--reducing exposures to re-suspended particles--in an operating room."

In the home, it could mean "changing your household products, or changing how you apply a product," she adds. "Or it could mean selecting flooring that is more healthful, or other materials in the house. It could mean taking your shoes off before entering the house."

Ferro is conducting her research under a National Science Foundation (NSF) Faculty Early Career Development (CAREER) award, which she received in 2009. The award supports junior faculty who exemplify the role of teacher-scholars through outstanding research, excellent education, and the integration of education and research within the context of the mission of their organization. NSF is funding her work with $420,421 over five years.

One part of the research involves computer modeling, that is, using a "fundamental force balance approach" to estimate when the particles detach from the surface. "A major advancement in the modeling is using statistical approaches to decipher the roughness of the particles and the surfaces," she says.

Once the computer modeling is complete, the researchers then compare the simulated results to experimental results.

One such experiment, for example, uses a wind tunnel to study particle movement.

"We put the particles on a surface, then increase the air velocity and watch the particles detach," she says. "We use particles where we know their composition. We use a camera, and compare images over time to see when the particles are physically removed from the surface."

Other experiments include "actual human walking or simulated walking using a mechanical foot," she says. "These experiments allow us to study the effect of other factors on re-suspension, such as electrostatic charge on the particles."

Many of the experiments use real dust the researchers gather themselves. "Sometimes we collect vacuum bags and use sieves to remove the large particles, which aren't relevant, then we analyze the dust for composition and size distribution," she says. "We look at different environmental conditions, for example, we change surfaces and change the relative humidity."

As part of the grant's educational piece, Ferro developed an educational unit for grades K-12 on indoor air quality and re-suspension of particles, taught in local schools by a graduate student.

She also recently designed an online competition for undergraduate students living on campus to see which team could achieve the highest scores for both indoor air quality and energy efficiency. The competition took place this past summer as a pilot study, and was quite successful, she says.

While energy efficiency competitions are not new, the indoor air quality component was a novel addition. The competitors--students living in five apartments--could see in real time, via installed monitors, what was floating around in their own air.

"The students could see online the different markers of air quality," Ferro says. "So they started doing things to improve their indoor air quality. For example, they began turning on fans while cooking, or increasing the ventilation while doing their nails. It not only was fun, but the students could really see what they normally had in their household air, and how they could improve it."