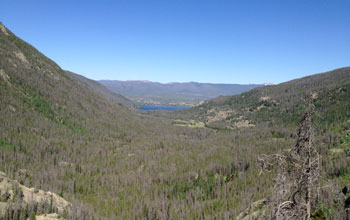 The following is part two in a series on the National Science Foundation's Water, Sustainability and Climate (WSC) Program. Parts one, three, four and five in this series are available on the NSF website.

In mountains across the Western United States, scientists are racing against time--against a tiny beetle--to save the last lodgepole pines.

Forests are bleeding out from the effects of the beetles, their conifers' needles turning crimson before the trees die.

Now, researchers are also hurrying to preserve the region's water quality, affected by the deaths of the pines.

"When these trees die," says hydrologist Reed Maxwell of the Colorado School of Mines, "the loss of the forest canopy affects hydrology and the cycling of essential nutrients."

Maxwell and other scientists recently published results of their study in the journal Biogeochemistry.

Co-authors, in addition to Maxwell, are Kristin Mikkelson, Lindsay Bearup, John McCray and Jonathan Sharp of the Colorado School of Mines, and John Stednick of Colorado State University. Mikkelson is the paper's first author.

Bark beetles, as they're known, are native to the United States. They're so-named because the beetles reproduce in the inner bark of trees. Some species, such as the mountain pine beetle, attack and kill live trees. Others live in dead, weakened or dying hosts.

Massive outbreaks of mountain pine beetles in western North America since the mid-2000s have felled millions of acres of forests from New Mexico to British Columbia, threatening increases in mudslides and wildfires.

Climate change could be to blame. The beetles' numbers were once kept in check by cold winter temperatures and trees that had plenty of water to use as a defense.

But winters have become warmer, and droughts have left trees water-stressed and less able to withstand an onslaught of winged invaders.

Death of a lodgepole pine

But the trees don't die immediately.

When beetles invade, a blue fungus spreads inside a tree's trunk, choking off transpiration and killing the tree in about two years.

The trees turn blood-red, then the ashen gray of death, dropping their needles to the forest floor.

"Some of the most important effects of bark beetles may be changes in the hydrologic cycle," says Maxwell, "via snow accumulation under trees and water transpiration from trees and other plants."

Biogeochemical changes may be even more important, he says, with carbon and nitrogen cycles interrupted.

"We're studying these hydrologic and geochemical processes through a combination of fieldwork, lab research and computer modeling," says Maxwell.

Whither the beetles, so the trees, forests...and waters

For example, a lack of needles on branches lets more snow fall through the canopy--snow that would otherwise be caught on branches. A tree without needles also has less shade beneath it.

The result is a shallower snowpack, earlier snowmelt and less water in spring.

"The real question," Maxwell says, "is how these processes translate from individual trees to hillslopes to large watersheds."

Dead trees don't transpire water. Once a forest has died, this important flow of moisture from the ground to the atmosphere ceases.

That can mean a loss of as much as 60 percent of the water budget, although increases in ground evaporation or transpiration from understory shrubs and bushes may compensate for some of the lack.

"Combined with what's happening to snowpack depth," says Maxwell, "it becomes a complicated relationship that can change the timing and magnitude of spring runoff from snowmelt--and an entire year's water resources."

All watersheds great and small

The observations prompted the researchers to study processes at the individual tree and hillslope scale to better understand what's happening in watersheds large and small.

"We're developing complex, numerical models of bark beetle-infested watersheds that include our best understanding of how and where water flows. The models are allowing us to isolate individual processes by turning them on and off in 'what-if' scenarios."

Along with on-the-ground observations, he says, "they're showing us more of the complex story of pine beetle effects on Western watersheds.

"We now know that healthy watersheds ultimately depend on healthy forests."

Western streams and rivers soon may be part of dead and dying forests, surrounded only by the ghosts of lodgepole pines past.