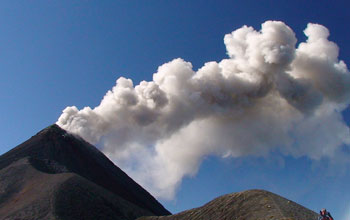 Open vent volcanoes constantly pop with small eruptions, causing low-level, low-frequency earthquakes. These are not the big high-profile earthquakes that come from the slip of a fault line, resulting in widespread destruction. These rarely make trouble.

But studying the earthquakes that accompany low-level eruptions can provide a wealth of data for scientists, offering important clues about volcanic behavior and, ultimately, better ways to predict when major eruptions might occur.

"We can apply what we learn about these small, repetitive events to other active volcanoes that are capable of large, damaging eruptions," says Greg Waite, an assistant professor of geological and mining engineering and sciences at Michigan Technological University. "We are trying to get a better handle on what these little earthquakes mean so we can better forecast major eruptions."

By understanding the behavior of these mini-earthquakes, he hopes to collect more details about the behavior of all eruptions, including information about the shape of volcanic plumbing systems and the dynamics that result in eruptions.

Waite is conducting his research under a National Science Foundation (NSF) Faculty Early Career Development (CAREER) award, which he received in 2011. The award supports junior faculty who exemplify the role of teacher-scholars through outstanding research, excellent education, and the integration of education and research within the context of the mission of their organization. Waite also has a Partnerships for International Research and Education (PIRE) award from NSF to study remote sensing for hazard mitigation and resource protection in Pacific Latin America.

While the volcanoes he is studying do have the potential for violent eruptions, most of the time they pose little risk, making them relatively safe for the researchers. "We can go and make measurements close to the source without a lot of danger," Waite says.

This allows them to examine the conduit, a pathway up to the surface, where earthquakes occur as the magma, a mix of crystals, molten rock and gas bubbles underground, rises. [Lava is what magma is called after it has been expelled from the volcano during an eruption.] Magma does not move smoothly up the conduit and may stagnate if the vent becomes closed.

"This allows pressure to build over several minutes," Waite says. "It is then released in a small explosion and produces a strong, very low-frequency earthquake. These kinds of earthquakes illuminate the geometry of the conduit, meaning that instead of there being a straight path of ascent, that conduit may be more complicated, with twists and turns and things."

At Fuego, for example, one of Waite's former doctoral students discovered a "kink" in the conduit--"a corner in the geometry"--several hundred meters below the surface. "If lava were to break through to the surface where the corner is, instead of continuing up to the summit, it could have dangerous consequences for the people living on that side of the volcano," he says.

"We are working backwards," Waite adds. "We are looking at the earthquake first, to try to understand where it came from and what exactly caused it."

The shape and amplitude of the seismic waves result from the path those waves take from the source to the recorder and the time history of the source, he explains. Waite then builds a computer model of the path effects in order to isolate the source.

"The characteristics of the source model--the distribution of forces over time and location--are then interpreted in terms of the physical processes that take place in the volcano," he says. "An example is the slight opening and closing of cracks due to pressure accumulation and release."

One important part of the modeling involves incorporating other types of data from the eruptions, including low-frequency sound (infrasound), gas emissions, and visual and infrared video. This requires collaboration with other scientists with expertise in those areas.

Waite and his collaborators, including Jeffrey B. Johnson, an assistant professor of geosciences at Boise State University, and Jonathan Lees, a professor of geological sciences at the University of North Carolina at Chapel Hill, are cooperating with the Guatemalan government as well as those in other countries where they have studied volcanoes to help them predict and prepare for potentially hazardous eruptions.

"We're trying to transfer what we learn to the local observers and to the monitoring agencies so they can make better predictions and better decisions," he says. "We're trying to help the people there in building their capacity to deal with these things."

They are working with Peace Corps volunteers with Michigan Tech's Peace Corps Masters International program. These students serve in the Peace Corps while conducting research for their master's degrees. Waite and his students work closely with local volcano observers for years at a time.

"While the local volcanologists know their volcanoes very well, we hope that our work will allow them to do more with their seismic data," he says. "Seismometers from stations close to volcanoes are used throughout the world to aid in prediction and are probably the most important type of remotely-sensed data. Still, there is potential to do much more with the seismic signals if we can interpret the subtleties of these signals."