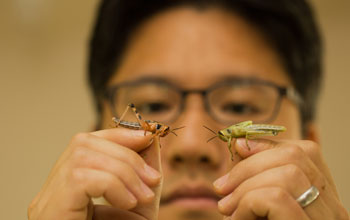 Some grasshoppers related to the desert locust respond differentially to rearing density.

In 1921, a Russian entomologist named Boris Uvarov made a curious discovery. He noticed that a single species of grasshopper could transform its appearance and behavior, depending on its population density. When its population was low, the insects' color was nondescript, and they avoided each other. When the population rose to a high density, however, they became brightly colored and formed swarms.

"Up until then, these locusts were thought of as two different species," says Hojun Song, an assistant professor of biology at the University of Central Florida (UCF), who is studying this phenomenon. "He, however, proposed a hypothesis called a 'phase' theory that says these grasshoppers can change based on local population density."

It is important to note the distinction between grasshoppers and locusts. All locusts are grasshoppers, but not all grasshoppers are locusts. Locusts are a special type of grasshopper capable of altering their shape, color and behavior in response to a change in density, an ability known as locust phase polyphenism.

The most famous locusts, and the most devastating in terms of their ability to destroy crops, are the desert locusts, a species found in Africa and the Middle East. "At low density, they are green, they are shy, and they avoid each other as juveniles," says the National Science Foundation (NSF)-funded scientist. "But at high density, they become yellow and black, and, as juveniles, they are attracted to each other."

Desert locusts belong to the genus Schistocerca, which contains about 50 other species. Song is studying the entire genus, trying to determine whether the others have a similar ability to undergo these changes, and, if so, to find the molecular mechanism behind it. "Our overall goal is to understand why some grasshoppers become locusts," he says.

"We know desert locusts can change, but it's not clear about the other species," he adds. "Within the genus, there are three other species known to be locusts, but the rest are just regular grasshoppers, not known to swarm. The question is: Do they have the ability, but live in an environment not conducive to swarming? Or do they not have the ability at all?"

This is important because swarming locusts are among the most serious pests in the world and can be extremely destructive to agriculture. Understanding the biological underpinnings of this behavior could lead to developing new, environmentally friendly ways of dealing with them. While the U.S. and Canada are as yet unaffected by locusts, they are a problem in Asia, Europe, Africa, Australia, and Central and South America, he says.

"Right now, the most effective way of controlling them is by using chemical pesticides, and that isn't good for the environment," Song says. "The results from this research could provide a novel way of controlling the locusts by manipulating their genetics during their development, possibly developing a specific control measure that won't harm other species or the environment."

Song is conducting his research under an NSF Faculty Early Career Development (CAREER) award he received in February. The award supports junior faculty who exemplify the role of teacher-scholars through outstanding research, excellent education, and the integration of education and research within the context of the mission of their organization. NSF is funding his work with $787,000 over five years.

In the lab, Song has created two density scenarios--high and low--for several species of grasshoppers he has caught locally in Florida, as well as another species from Texas, and still another he plans to obtain from California. He also is conducting field studies in Mexico and South America on other species, because he cannot bring the insects into the U.S.

"We have a generation of grasshoppers in the lab that reproduce," he says. "From the beginning, when the eggs hatch, we divide the hatchlings into two groups. Each of the members of one group is in complete isolation--they cannot see or touch or smell each other--while we are rearing the second group in high density, 500 to 1,000 in a cage. They bump into each other, see each other and smell each other."

The researchers already have generated data for two Florida species and have found that they do, in fact, have the ability to change, although they are non-swarming when found in nature. "They are showing the traits in the lab," he says. "They are shy when isolated, but attracted to each other in crowded conditions. They change color, and one species marches together."

He cannot yet explain why they don't fly in swarms outside the lab, although he speculates "there may be something in the Florida environment that makes swarming unnecessary."

In the grant's educational component, he is using locusts and grasshoppers as a model for teaching biology, both to his undergraduate students and, eventually, to fifth graders at a local public elementary school.

"Grasshoppers are familiar to students at all levels and they are easy to keep in the lab," he says. "I have colonies of several species in the lab that I am using for this project."

Recently, Song created a new undergraduate level course on integrative biology in which students have the opportunity to learn about field biology, scientific methods, experimental designs and data analysis in a really hands-on way.

"These days, many biology undergrad students do not necessarily get serious introduction to scientific methods," he says. "Of course, they learn about hypothesis testing and other stuff in their science classes, but at a large school like UCF, such an opportunity is rare. The six-week summer class I just finished teaching was an eye-opening experience for the students because they had to come up with an original project and completely carry it out within the duration of the course. The feedback from the students was excellent, which demonstrates a real need for hands-on courses on scientific methods."