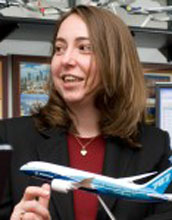 The U.S. Department of Transportation helps make air travel less frustrating by setting policies that protect the rights of air travelers. For example, at a Senate panel in 2012, Transportation Secretary Ray LaHood said that he had been urging airlines not to charge fees to reserve more popular coach seats.

"It can be challenging for government agencies to design policies that best balance the needs of customers and airlines because policy makers have historically had little information about airline customers," says Laurie Garrow, an associate professor in civil and environmental engineering at the Georgia Institute of Technology.

Garrow says the Internet is providing new opportunities to design policies that better protect customers. For instance, several firms have created databases of airlines' prices from online sources, and sell this information to airlines. Garrow's research seeks to explore ways in which researchers and policymakers can use these big data to better understand how customers respond to airline practices.

"There is currently a lot of discussion related to the airlines' practice of blocking rows of seats for their premier customers (such as frequent fliers with elite status). Some have questioned whether showing seats as being unavailable to non-premier customers misleads customers into purchasing a premium coach seat," Garrow says. "These individuals argue that the practice of blocking seats may lead customers to believe a plane is fuller than it is, and encourage them to pay more to reserve a window or aisle seat towards the front of the plane."

This is one example of how big data can be used to better understand how customers respond to airline practices. Practices that are shown to hinder customers from informed decisions when selecting flights can be prioritized as part of future government policies, thereby improving airline customers' experiences.

Garrow is conducting her research under a National Science Foundation (NSF) Faculty Early Career Development (CAREER) award, which she received in 2009. The award supports junior faculty who exemplify the role of teacher-scholars through outstanding research, excellent education, and the integration of education and research within the context of the mission of their organization. NSF is funding her work with about $400,000 over five years.

As part of the grant's educational piece, she developed curriculum for an undergraduate airline planning course and a high-school summer camp. Students become airline CEOs and make real-time decisions for their airlines using software provided by the airline industry. Garrow explains that "as CEOs, students were able to see how their decisions impacted different parts of the organization. For example, if they scheduled their aircraft at times of the day in which customers did not want to travel, they earned less revenue."

"The main focus of the camp is around understanding how the different parts of the organization interact through the simulation software," says doctoral candidate Brittany Luken, who directed the camp with help from other graduate students and researchers from Georgia Tech. "The idea is the student will create and make business and operation decisions for their own airline. They decide everything, from the aircraft they lease or purchase to where and when they are flying and maintaining the aircraft, to setting the fares."

Student evaluations have been very positive and revealed their understanding of the complexities of running an airline. One group noted "the problems caused by the rising price of fuel became apparent to our group after the first year simulation. The only way to combat the rising fuel prices is to raise the ticket prices and/or lower the services offered in flight. Thus, we learned that today's economy plays a big role in operating an airline."