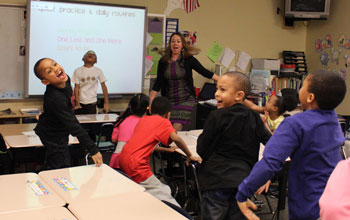 It took Paula Jakopovic more than a decade of public education before she experienced her "spark:" Before math "came alive," before she learned to explore and collaborate and discuss the subject oft-maligned by students and teachers alike.

As an elementary mathematics coach in Omaha Public Schools, Jakopovic now works to trigger similar sparks for her colleagues and students. Her job--and the lessons leading to it--stem from an innovative partnership between the University of Nebraska-Lincoln (UNL) and some of the state's largest school districts.

Long funded by the National Science Foundation (NSF), the partnership encompasses three projects of NSF's Math and Science Partnership (MSP) program and the Robert Noyce Teacher Scholarship program: NebraskaMATH, Math in the Middle and NebraskaNOYCE. Together, they have allowed hundreds of Nebraska teachers to earn advanced degrees in mathematics education, supported dozens more as they work in high-needs schools and prompted the growth of a cadre of master teachers. The partnership is built on the idea that better math teachers make better math students.

A recent funding boost could help the partnership produce more of both. In July, Omaha-based Lozier Foundation and the Sherwood Foundation announced a $5.5 million grant to support a three-year NebraskaMATH Omaha Public Schools Teacher Leader Academy. It will allow more than 200 teachers in the Omaha district to take graduate coursework in mathematics education. Omaha is Nebraska's largest district. More than 70 percent of the students are ethnic minorities and receive free and reduced lunch.

The grant "gives us a real opportunity to make a big difference," said Jim Lewis, director of UNL's Center for Science, Mathematics and Computer Education, which houses NebraskaMATH and the other initiatives. "I'm just honored that there are public-minded citizens in Omaha willing to make this major commitment," he said. "I think that NSF funding made it possible to develop and refine these programs ...to do the research that offers reasons to believe that these things make a difference, in the lives of students as well as teachers."

A mathematician by training, Lewis began working with his education faculty colleagues nearly a decade ago, crafting Math in the Middle: a master's degree program for middle-school mathematics teachers in Lincoln and rural Nebraska districts. Over the years, that project evolved and intertwined with other NSF grants. Now, UNL and partner schools work together on K-12 math teacher development, plus support for science, technology, engineering and math majors and professionals to become secondary math teachers in high-needs schools.

"We not only want to provide professional development and graduate education," Lewis said. "We want to take the very best and give them opportunities to be a part of the instructional faculty," creating talented teachers who become leaders in their schools and share knowledge with others.

This is the approach Jakopovic now takes in her own school. The Math in the Middle classes she took were intense and sometimes frustrating, she said, but they helped her become a better teacher.

"It gave me a lot of perspective on kids that struggle through math."

NebraskaMATH and its partner initiatives have crafted a "wonderful partnership," said Joan Prival, program director for the MSP and Noyce programs at NSF. By linking the university and school districts, as well as new math teachers and seasoned ones, "They are building this strong and enduring community--mathematics teachers, school administrators, and higher education mathematics and mathematics education faculty--focused on positive experiences and outcomes for students."

Measuring the effectiveness of the projects is ongoing. But in Lincoln, where multiple teachers have now received advanced degrees, "It's changing the conversation in elementary schools," Lewis said.

"I think this has grown in ways that I didn't anticipate," said Ruth Heaton, a UNL professor of teaching, learning and teacher education who has worked with Lewis on these projects since 2004. Heaton expected the program to focus simply on people becoming better classroom teachers. Instead, she found teachers eager not only to learn, but also to work towards a master's degree. Or beyond: Half of the original class of Noyce scholars are pursuing doctorates.

Yet what makes Heaton proudest is something far less tangible. "I think the piece that I feel best about is the way in which we've helped teachers ...see what they're capable of. We've helped teachers see that they can reason and think about mathematics. And we've done the same thing for children."