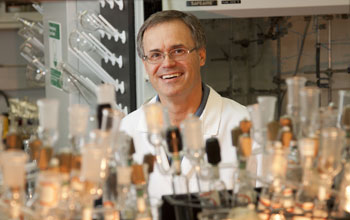 In medical diagnostics, clinicians often use positron emission technology (PET), a nuclear medicine imaging technology that sends an active molecule containing a radioactive tag--almost like a GPS system--that is designed to hone in on specific parts of the body.

These molecules are specific to certain conditions. For example, abnormally growing tissue will take up large amounts of glucose, so PET scans often use a glucose analog with a radioactive tag to pinpoint a suspected tumor.

Until recently, however, compounds that are known biomarkers for certain diseases had been very difficult to label with radioactive tags, limiting their value for detecting these diseases; for example, L-DOPA, which is taken up by the brain. "Because the technology to put the isotope on the molecule efficiently did not exist, we just couldn't use these compounds," says Stephen DiMagno, professor of chemistry at the University of Nebraska-Lincoln.

But DiMagno and his research team have found a way to add radioactive tags to L-DOPA, and dopamine, an advance that increases the potential for speeding up the diagnosis of certain pediatric cancers, cardiac disease, and such neurological disorders as Alzheimer's and Parkinson's diseases. Moreover, "it opens the way to make new compounds as well as 'label' those compounds that had been difficult to label," DiMagno says.

These compounds, with their radioactive tracers, are 6-[18F]-Fluorodopamine (6-[18F], a promising imaging biomarker of neuroblastoma, a serious and often fatal childhood cancer, and pheochromocytoma, a rare tumor of the adrenal gland, and 6-[18F]-L-DOPA, which has potential as a biomarker in patients with Parkinson's disease.

DiMagno and his colleagues, using a specific chemical reaction, developed a process that modifies L-DOPA in a way that allows the radioactive tag to be more easily attached. "The actual reaction we used has been known for a long time, but it was difficult to use effectively because there were fundamental things about the chemistry we did not understand," he says. "It took three or four years, but we fixed the problems that prevented them from being used."

The scientists make "precursor" molecules, that is, the compounds that ultimately will become imaging agents, that are designed to combine rapidly and efficiently with [18F]-fluoride, in a sterile glass reactor, according to DiMagno.

"After heating the mixture under a special set of conditions, the [18F]-fluoride displaces an ancillary portion of the precursor, yielding the fluorinated compound," he says. "Then we quickly purify the compound for use in imaging studies."

DiMagno's lab had long focused on the process of putting fluorine into molecules, but a sabbatical he took seven years ago, when he had time to reflect more deeply about his science, convinced him to work on this particular project.

"I got into science because I wanted to have an impact," he says. "I was doing fundamental work, but I wanted to do more to make a difference in the world. So when I came back, we took an inventory on the possible ways this problem could be solved, to figure out these chemical reactions and the routes for putting the label onto these drugs."

In the fall of 2011, DiMagno was among the first group of scientists to receive a $50,000 National Science Foundation (NSF) Innovation Corps (I-Corps) award, which supports a set of activities and programs that prepare scientists and engineers to extend their focus beyond the laboratory into the commercial world.

"This new chemistry can be used to increase the efficiency and reduce production costs per dose for many existing PET agents," he says. "We believe this technology can also be used to make new PET agents that will assist drug companies in their efforts to develop new therapeutic drugs."

DiMagno worked with his former doctoral student Kiel Neumann, now an employee of the new company, who helped establish a collaboration with St. Jude Children's Research Hospital, an internationally recognized pediatric treatment and research facility in Memphis. St. Jude's is interested in using radiotracers prepared through this technology to image pediatric cancers.

Interestingly, the research initially grew from an NSF basic science grant of $420,000, awarded in July 2007, that focused on the behavior of salts in liquids such as gasoline.

"That's where the chemistry came from, even though it seems like a pretty far cry from what we are doing now," DiMagno says. "But it's not. It was a logical extension of a basic science proposal."

The researchers formed the new company "to allow physicians to image patients with cancer and diseases such as Alzheimer's better than they could before," he says, adding that he now feels he is making the impact he sought. "I look forward to the day when I can shake some parents' hands because I played a role in saving their child's life," he says.