Inspired by nature: textured materials to aid industry and military 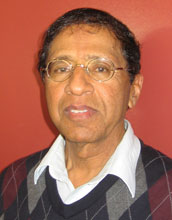 The lotus leaf has a unique microscopic texture and wax-like coating that enables it to easily repel water. Taking his inspiration from nature, a University of Virginia (UVA) professor has figured out a way to make metals and plastics that can do virtually the same thing.

Mool Gupta, Langley Distinguished Professor in UVA's Department of Electrical and Computer Engineering, and director of the National Science Foundation's (NSF) Industry/University Cooperative Research Center for Lasers and Plasmas, has developed a method using high-powered lasers and nanotechnology to create a similar texture that repels water, captures sunlight and prevents the build up of ice.

These textured materials can be used over large areas and potentially could have important applications in products where ice poses a danger. For example, in aviation, the automobile industry, the military, in protecting communication towers, blades that generate wind energy, bridges, roofs, ships, satellite dishes, and even snowboards.

In commercial and military aviation, for example, these materials could improve airline safety by making current deicing procedures, which include scraping and applying chemicals, such as glycol, to the wings, unnecessary.

For residents in the frigid Northeast, many of whom rely on satellite systems, "it could mean they won't lose their signal, and they won't have to go outside with a hammer and chisel and break off the ice," Gupta says.

The materials' ability to trap sunlight also could enhance the performance of solar cells.

Gupta and his research team first made a piece of textured metal that serves as a mold to mass-produce many pieces of plastic with the same micro-texture. The replication process is similar to the one used in manufacturing compact discs. The difference, of course, is that the CD master mold contains specific information, like a voice, whereas, "in our case we are not writing any information, we are creating a micro-texture," Gupta says.

"You create one piece of metal that has the texture," Gupta adds. "For multiple pieces of plastic with the texture, you use the one master made of metal to stamp out multiple pieces. Thus, whatever features are in your master are replicated in the special plastic. Once we create that texture, if you put a drop of water on the texture, the water rolls down and doesn't stick to it, just like a lotus leaf. We have created a human-made structure that repels water, just like the lotus leaf."

The process of making the metal with the special texture works like this: The scientists take high-powered lasers, with energy beams 20 million times higher than that of a laser pointer, for example, and focus the beams on a metal surface. The metal absorbs the laser light and heats to a melting temperature of about 1200 degrees Centigrade, or higher, a process that rearranges the surface material to form a microtexture.

"All of this happens in less than 0.1 millionth of a second," Gupta says. "The microtexture is self-organized. By scanning the focused laser beam, we achieve a large area of microtexture. The produced microtexture is used as a stamper to replicate microtexture in polymers. The stamper can be used many, many times, allowing a low cost manufacturing process. The generated microtextured polymer surface shows very high water repellency."

In the fall of 2011, Gupta was among the first group of scientists to receive a $50,000 NSF Innovation Corps (I-Corps) award, which supports a set of activities and programs that prepare scientists and engineers to extend their focus beyond the laboratory into the commercial world.

The other project members are Paul Caffrey, a doctoral candidate under Gupta's supervision, and Martin Skelly of Charleston, S.C., a veteran of banking in the former Soviet Union who serves as business mentor and is involved in new business investments.

The team participated in a three-day entrepreneurship workshop at Stanford University run by entrepreneurs from Silicon Valley. "We are still pursuing the commercial potential," Gupta says. "The idea is to look at what market can use this technology, how big the market is, and how long it will take to get into it."