California's iconic redwoods in danger from fire and infectious disease 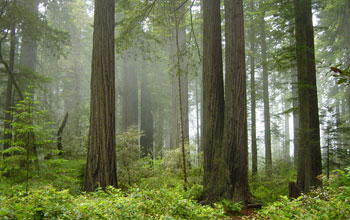 Iconic coastal redwood forests are threatened by a link between disease and wildfire.

Now these forests' stately trees are facing a new menace: The combined effects of sudden oak death and fire. And this time, the iconic redwoods are at risk.

Usually resistant to the effects of wildfires, California's coast redwoods are now burning as fast as other trees. Why?

Into the redwood forest

The study began in 2006. "In 2008, almost half our plots were burned by wildfires that lasted the better part of a month," says Rizzo.

That was the beginning of the end for many coast redwoods, surprising researchers who expected the trees to be fireproof.

The key to the redwood deaths, discovered Rizzo, Margaret Metz and Kerri Frangioso of UC Davis, along with Morgan Varner of Mississippi State University and Ross Meentemeyer of North Carolina State University, lies in the sudden oak death pathogen.

"If redwoods didn't live in forests affected by the disease," says Metz, "they could withstand fires just fine."

The biologists recently reported their results online in the journal Ecology, published by the Ecological Society of America.

"The disease likely created more fuel for wildfires as dead tanoak branches fell," says Rizzo. "The loss of the oaks also would have decreased the amount of shade, drying out the forest and turning it into a tinder box, one not even redwoods could survive."

The forest ecosystem disturbance that happens when a pathogen like sudden oak death becomes established and starts killing trees, says Rizzo, "clearly isn't the only one that may be important to that forest."

Sudden oak death has killed millions of trees in the coastal forests of California and Oregon. It was first linked with the mortality of tanoaks and coast live oaks in the San Francisco Bay area in the mid-1990s. In 2000, Phytophthora ramorum was confirmed as the causal agent.

Analyses of the pathogen's genetic structure indicate that a single introduction sparked the wave of disease. It likely originated at a nursery in Santa Cruz, Calif.

Since then, scientists have found that the pathogen has infected plants in 45 genera, including ferns. "These host species are important parts of the forests along the California coast and at the wildland-urban interface," says Rizzo.

The pathogen's current range extends more than 435 miles from the Big Sur area in central California north to Mendocino County, with smaller affected areas in Humboldt County, Calif., and Curry County, Ore. Forests along Big Sur are among the most affected, with 100 percent of tanoaks infected in some stands.

Many of those forests are also prone to wildfires. "There's a growing concern that dead trees from the disease may make wildfires worse," Metz says.

The 2008 wildfires were the first in forests affected by sudden oak death. The largest fire, called the Basin Complex, was ignited by a lightning storm in June. It burned more than 95,000 hectares in the Big Sur region.

In September, the Chalk Fire started south of the Basin Complex perimeter; it burned an additional 16,000 acres. "More than 40 percent of our 280 plots went up in flames, 98 in the Basin Fire and 23 in the Chalk Fire," says Rizzo.

A month after containment of the Basin Complex fire, the researchers surveyed 61 plots to measure burn severity before the forest could change with the onset of California's winter rains. "These measurements serve as our baseline data on ecosystem responses to interactions between fire and infectious disease," says Rizzo.

When sudden oak death kills tanoaks, it alters the trees in ways that leave neighboring redwoods vulnerable, the researchers found.

Flames are carried high into the tree canopy by the dead tanoaks; they then scorch the crowns of surrounding redwoods. Injury to the redwoods' crowns is what likely caused the trees to die in the 2008 fires, the scientists believe.

"Humans are causing widespread changes throughout our world, including greater wildfires related to changing climate and from increasing infectious diseases due to more modes of transportation," says Sam Scheiner, program director at the National Science Foundation (NSF) for the joint NSF-NIH Ecology and Evolution of Infectious Diseases Program, which funded the research.

"This study shows that these changes can combine in unexpected ways that can be very destructive. More such research is needed if we are to prepare for what's to come."

Rizzo agrees. "We're moving species around the globe at high rates, and global warming has increased fire severity. There may be all sorts of consequences, among them, dead and dying coast redwoods."