Earthquake researchers test out a super-elastic material known as nitinol, with promising results 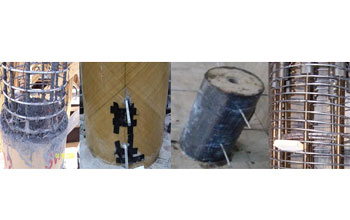 Bridges are a main component of the transportation infrastructure as we know it today. There are no less than 575,000 highway bridges nationwide, and more than $5 billion are allocated yearly from the federal budget for bridge repairs.

Over the past couple of decades, increasing seismic activity around the world has been identified as an impending threat to the strength and well-being of our bridges. Earthquakes have caused bridge collapses in the U.S., Japan, Taiwan, China, Chile, Turkey and elsewhere. Therefore, we need to find ways to minimize seismic effects on bridges, both by improving existing bridges and refining specifications and construction materials for future bridges.

A large majority of bridges are made of steel and concrete. While this combination is convenient and economical, steel-concrete bridges don't hold up as well in strong earthquakes (7.0 magnitude or higher). Conventional reinforced columns rely on the steel and concrete to dissipate energy during strong earthquakes, potentially creating permanent deformation and damage in the column and making the column unusable.

Under earthquake loading, engineers allow for damage in column hinges to dissipate energy and prevent total bridge collapse. While this practice is widely accepted, the effects of hinge damage can interfere with disaster recovery operations and have a major economic impact on the community.

With funding from the National Science Foundation (NSF), and using NSF's George E. Brown, Jr. Network for Earthquake Engineering Simulation (NEES), civil engineer M. Saiid Saiidi of the University of Nevada, Reno (UNR), and his colleagues have discovered a solution. They've identified several smart materials as alternatives to steel and concrete in bridges.

Shape memory alloys (SMAs) are unique in their ability to endure heavy strain and still return to their original state, either through heating or superelasticity. SMAs demonstrate an ability to re-center bridge columns, which minimizes the permanent tilt columns can experience after an earthquake.

Nickel titanium, or nitinol, the shape memory alloy tested in the UNR project, has a unique ability even amongst SMAs. While the majority of SMAs are only temperature-sensitive, meaning that they require a heat source to return to their original shape, Nitinol is also superelastic. This means that it can absorb the stress imposed by an earthquake and return to its original shape, which makes nitinol a particularly advantageous alternative to steel. In fact, the superelasticity of nickel titanium is between 10 to 30 times the elasticity of normal metals like steel.

Many of us know nickel titanium from our flexible prescription eyeglass frames. The material allows frames to easily return to their original shape after being bent in any direction. Nickel titanium's uses are extremely varied, with applications that range from medicine to heat engines to lifting devices and even novelty toys--and now, earthquake engineering.

To assess the performance of nickel-titanium reinforced concrete bridges, the researchers analyzed three types of bridge columns: Traditional steel and concrete, nickel titanium and concrete, and nickel titanium and engineered cementitious composites (ECC), which include cement, sand, water, fiber and chemicals. First, they modeled and tested the columns in OpenSEES, an earthquake simulation program developed at the University of California, Berkeley. Then, they assembled and tested the columns on the UNR NEES shake table.

To strengthen the concrete and prevent immediate failure in an earthquake, the researchers used the shake tables to test glass and carbon fiber-reinforced polymer composites. Both composites substantially enhanced the reinforcing properties of concrete and the columns resisted strong earthquake forces with minor damage.

The results of both the modeling and shake table tests were extremely promising. The nickel titanium/ECC bridge columns outperformed the traditional steel and concrete bridge columns on all levels, limiting the amount of damage that the bridge would sustain under strong earthquakes.

While the initial cost of a typical bridge made of nickel titanium and ECC would be about 3 percent higher than the cost of a conventional bridge, the bridge's lifetime cost would decrease. Not only would the bridge require less repair, it would also be serviceable in the event of moderate and strong earthquakes. As a result, following a strong earthquake, the bridge would remain open to emergency vehicles and other traffic.

About the author: Misha Raffiee is a sophomore undergraduate at the California Institute of Technology, but she began work with UNR on the NSF/NEES 4-Span Bridge Project following her graduation from high school at age 15. As an undergraduate research fellow, Raffiee was given the opportunity to conduct her own complementary research, a feasibility study of copper-based shape memory alloys and ECC. Copper-based SMAs, such as copper-aluminum-beryllium (CuAlBe) are predicted to be more cost-effective than other shape memory alloys, such as nickel titanium. Using computer modeling and testing in the Open System for Earthquake Engineering Simulation with the results from the nickel titanium-reinforced concrete runs, Raffiee was able to assess the performance of a unique CuAlBe and ECC column. She presented her findings at NSF's Young Researcher's Symposium at the University of Illinois, Urbana-Champaign, and later assisted in presentations of the nickel titanium-reinforced concrete column project at an NSF showcase event held at the United States Senate. Raffiee credits the experience as an NSF/NEES undergraduate research fellow with helping her grow both as a researcher and as a scholar, solidifying her post-graduate aspirations. Raffiee participated in NSF's Research Experiences for Undergraduates Program under the mentorship of Dr. Saiidi.

Editor's Note: This Behind the Scenes article was first provided to LiveScience in partnership with NSF.