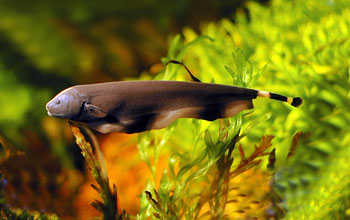 The weakly electric fish, so named because it generates a weak electric field, can do some very cool things. Using sensors located all over its body, for example, it can detect prey or predators that interrupt its surrounding electric field. This enables it to hunt in the dark, as well as to avoid being hunted by piranhas and other visually guided fish that share its home.

It also has a unique propulsion system that allows it to swim backwards; in fact, the fish can switch from full speed ahead to full speed in reverse in a fifth of a second.

Like many things in nature, the weakly electric fish, a fresh water fish found in South America and Africa, is inspiring scientists trying to answer fundamental questions, in this case about sensory abilities and movement, with the goal of better understanding brain science and, ultimately, developing new technologies drawn from biology.

"The general question we are trying to understand is how the ability to sense the world is combined with the ability to move," says Malcolm MacIver, an associate professor of mechanical and biomedical engineering at Northwestern University. "What is the relationship between the space you are able to sense, and your mechanical abilities?"

To explain the relationship, he suggests comparing two starkly different scenarios one might encounter while driving a car. On a clear sunny day, most people drive in "deliberative" mode, meaning the driving conditions do not prompt any urgent responses to the circumstances or the driving environment. When encountering a dense fog, however, people typically switch to "reactive" mode--they slow down, for example, and become more alert to potential dangers on the road.

"When you're driving on a flat roadway on a sunny day, you can see a far distance ahead, and think about things, such as whether you're hungry or need to stop to use a restroom and want to get off an exit," MacIver says. "In a fog, you don't have that luxury. The relationship between your sensory volume and where you are moving in your immediate future determines the kind of behavioral strategies you use."

How does this connect to the fish? "What the fish have allowed us to see is that most animals are in reactive mode, especially aquatic animals, because light doesn't travel very far in water," he says. "Remember that our evolutionary ancestry started with animals in the water. My hypothesis is that something very important happened when we came up on land, as light can travel much farther in air than in water."

The weakly electric fish, has sensory receptors everywhere on its body, "which would be like us having eyeballs scattered across our body surface," says MacIver. "The fish emits an electric field, and its sensors detect the field. So if something is out there, there is an interruption of the signal and the receptors pick up the distortion. It can do it in all directions."

The information researchers gain by studying the fish ultimately could have important applications, particularly in designing machines equipped with this so-called "electrosense," that is, the ability to maneuver and "sense" the world under water with weak electric fields.

MacIver and his collaborators already have developed prototype robots that can move and "sense" in highly cluttered and dark underwater environments, and expect to see them in commercial use, including possibly by the U.S. Navy, within the next few years.

"The underwater robots used during the Deepwater Horizon problem were held back by lack of maneuverability and sensor technology that could have helped them function well in turbid environments," he says, referring to the BP oil spill in 2010 in the Gulf of Mexico. "They were trying to operate in those huge plumes of oil mixed with water. You can't see in that. This technology has the potential to change all that."

MacIver also is working on a mechanical version of the fish's unique propulsion system.

"Most fish flap their fin, they wave the back portion of their body through the water, which propels them forward," he says. "Our fish doesn't swim that way. It keeps its body straight, and has a fin that goes almost the full length of its body, down and along the belly. It ripples that fin, almost like a curtain in the wind. Using that, they are able to move in a highly acrobatic fashion."

Not only can it swim backwards, but "this fish can also move in all directions, including sideways and at an angle," he says. "It's like the helicopter of the water. If we had a device that could do this, we would have an aquatic helicopter."

They are working on it. "We have a bit further to go with the high maneuverability propulsion system," he says. "But we're getting there."

MacIver is conducting his research under a National Science Foundation (NSF) Faculty Early Career Development (CAREER) award, which he received in 2009 as part of NSF's American Recovery and Reinvestment Act. The award supports junior faculty who exemplify the role of teacher-scholars through outstanding research, excellent education, and the integration of education and research within the context of the mission of their organization. NSF is funding his work with about $1.25 million over four years.

In 2009, he also received the Presidential Early Career Award for Scientists and Engineers (PECASE), which recognized his interdisciplinary work on the biomechanical and neural basis of intelligence, spanning robotics, biomechanics, neurobiology, philosophy and computation, as well as for his innovative science outreach efforts that include Hollywood science-fiction advisory efforts, interactive art installations and blogging for Discover magazine.

MacIver uses three approaches in his work: mechanics and robotics for understanding the ways in which the body contributes to adaptive behavior; neurobiology for understanding the how sensory signals are processed for movement control; and computational modeling, for constructing supercomputer simulations of the body, nervous system, sensory signals and mechanical interactions with the world.

MacIver also helped develop "Scale," a "singing electric fish" art installation that has appeared on exhibition in The Netherlands and in China. The multidisciplinary artwork was created by MacIver, visual artist Marlena Novak, and composer and sound designer Jay Alan Yim, the latter two also from Northwestern. Twelve different species of electric fish from the Amazon River Basin comprise a "choir" whose sonified electrical fields provide the source tones for an immersive audiovisual experience.