"Talking" to the animals

Chemical ecologists translate the language of the sea 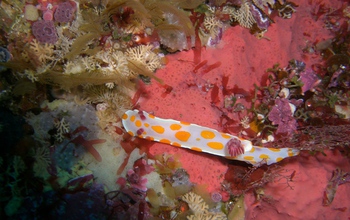 Chemical signals are the primary "language" used by ocean organisms to communicate.

If Dr. Dolittle could talk to the animals, it's more likely he was a chemical ecologist than a linguist, says marine scientist Mark Hay of the Georgia Institute of Technology in Atlanta--at least when it came to talking to the animals (and plants) of the sea.

Chemical signals are the primary "language" used by ocean organisms. Using a kind of extra-sensory perception (ESP) of the deep, marine animals and plants react to other species and to their environment based on these cues.

Humans are poorly designed to understand such chemically-driven interactions "because we sense the world primarily via visual and auditory input," Hay says.

"In contrast, many ocean species lack eyes and ears. They sense much of their world via chemical signals. In the sea, even species that see and hear rely on chemical cues."

How would you find food, a mate or protect yourself against thieves and murderers? What if you had to rely on detecting chemicals produced by other people and other animals to survive?

"For ocean animals and plants, it's like that every minute of every day," says Hay. For most marine species, chemical cues determine whether they consume, fight with, run from or mate with the creatures next to them--and whether they are eaten by, infected by or overgrown by natural enemies.

Welcome to New York City ...eerily silent and utterly dark ...beneath the waves.

Dead ahead are the shapeshifters, marine denizens that use chemical cues to change their outward appearances.

When the bloom-forming phytoplankton Phaeocystis globosa chemically senses its next-door neighbors under attack by ciliates, which feast on small foods like phytoplankton, it shifts shape and grows in colonies too big for the ciliates to consume.

Then when the phytoplankton's neighbors are attacked by copepods, says Hay, which feed on large foods, P. globosa suppresses colony formation and grows as single cells too small to interest the copepods.

"These shifts could alter energy flow, nutrient cycling and patterns of carbon sequestration in the sea," says Hay. "Chemical cues affect not only individual behavior and population-level processes, but also community organization and ecosystem function."

Finding food: no clues but molecules

What if you had to fly a plane over an area the size of Canada to locate a grocery store with no cues but a few simple "fresh food" molecules wafting through the air?

Tube-nosed seabirds--stormpetrels, albatrosses, petrels, shearwaters and others--do exactly that. They use a chemical cue to track high-productivity areas in open seas where they forage on zooplankton, fish and squid.

They're responding to the presence of dimethyl sulfide (DMS), produced when zooplankton feed on blooms of phytoplankton, then excrete this substance.

"At scales of thousands of square kilometers, DMS may function as an olfactory landscape," says Hay, "indicating ocean areas where phytoplankton and zooplankton accumulate and where the search for prey should be most successful."

To discover how chemical signals play a part in ocean ecosystems, and perhaps human health, Hay and colleagues are studying marine organisms and how they produce and deploy their chemical arsenals.

Understanding substances that cloak seaweeds and other species could allow scientists to adapt these compounds for use against microbial pathogens, HIV, cancer and other human diseases.

As part of a project supported by the National Science Foundation (NSF), Hay and colleagues have analyzed compounds from more than 800 species in the waters around Fiji Islands like Yanuca. The project is co-funded by the National Institutes of Health's International Cooperative Biodiversity Group program.

"The study of chemical signaling on Fiji Island coral reefs will help us better understand the interactions that keep the oceans healthy," says David Garrison, a program director in NSF's Division of Ocean Sciences, which funded the research.

One species has emerged as a frontrunner in Hay's investigations: the red seaweed Callophycus serratus.

The alga is adept at fighting infections. Chemical extracts from C. serratus fend off disease-causing microbes. The compounds are among the largest groups of algal antifungal chemical defenses discovered to date.

"We're in effect ‘listening in' on the fight between this red seaweed and a fungus that's trying to attack it," says Hay. "What we hear may allow us to translate the language of the sea into that of human biomedicine."

Tuning into The Deep

He may be tuning in for some time. C. serratus produces at least 28 bioactive compounds.

Why would a single species of seaweed produce so many bioactive substances? The compounds may work together against a host of enemies, says Hay. "Or they may have separate uses we don't yet comprehend."

Hay is busy deciphering. He and colleagues have found that Callophycus serratus contains bromophycolides--in ocean-talk, chemicals that have shown promise as new treatments for infectious diseases.

Whether working along the shores of Fiji or in the seas around Florida, Panama or the Caribbean Islands, Hay is proving that we can interpret the language of marine organisms.

"Knowing what's being communicated will provide a deeper understanding of marine ecosystems," says Hay, "and improve our ability to serve as wise stewards of these natural resources."