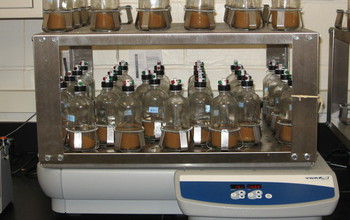 Claudia Gunsch tests how contaminants are removed from soil columns.

There are several advantages to having natural microbes break down contaminants in soil and groundwater. First, it's cost effective. More importantly, the process involves using native microorganisms that already are present under the Earth's surface.

Sometimes, however, the microbes need a little boost from the outside to help get them going. Scientists either use "bio-stimulation," which involves giving them nutrients or oxygen, or "bio-augmentation," which involves transferring foreign microbes with new "degradative capabilities" into the existing microbes that will cause them to work.

Claudia Gunsch, an assistant professor of civil and environmental engineering at Duke University, is working on the latter approach, providing new genes to existing microbes already under the surface to activate them so they can begin destroying environmental toxins.

"This is a naturally occurring process that happens, but we are speeding it up by making sure the right conditions are at play," she says. "This approach is especially promising for scenarios where traditional degradation isn't working, and for any type of contaminants, such as oil spills or toxic waste."

The process, called bacterial conjugation, involves the transfer of genetic material between bacterial cells by direct cell-to-cell contact or by a bridge-like connection between two cells, known as a pilus. During conjugation, the donor cell provides a conjugative genetic element called a plasmid, which is a specific type of DNA.

"What we're trying to do is inject microorganisms with the required genes on their plasmids and force the plasmid transfer to the microbial population already present in the soil," she explains. "We are giving them new genes to make them work more efficiently. There always are bugs under the surface, but they may or may not break down contaminants on their own. We are trying to figure out the conditions necessary to have genes transfer to the native organisms. These injected microbes don't have to survive. They can die because the necessary genes have been transferred to native microorganisms."

The plasmids consist of extra chromosomal DNA, "meaning they aren't essential for cell survival," Gunsch adds. "The bacteria don't need them. Once the contaminant has been broken down, this plasmid goes away and the microbial community goes back to what it was before causing no long term ecological impacts."

Gunsch is conducting her research under a National Science Foundation Faculty Early Career Development (CAREER) award, which she received in 2009. The award supports junior faculty who exemplify the role of teacher-scholars through outstanding research, excellent education and the integration of education, and research within the context of the mission of their organization. She is receiving about $400,000 over five years.

She and her team have created a model system in the lab, using the Pseudomonas putida bacterium as a vector for the gene transfer. They are using an engineered strain which fluoresces when it transfers, making it easy for the researchers to follow. They are testing it in a number of conditions, including water, soil, sediment and a lab scale soil column, which mimics a groundwater environment.

"We've found there are a couple of different parameters that control whether this strategy will work," she says. "Success depends on how closely related the donor cells are to the recipient cells in the subsurface. The more closely related they are, the more likely the transfer will occur and the genes will function; that's the most critical one."

Another important factor is the level of organic carbon present in the environment. The more, the better. "If there is a lack of carbon--food and nutrients--the transfer is less likely to occur than if there is more," she says. "But we can overcome some of these genetic limitations."

Widespread commercial use is still in the future. "For us to get to the next stage and use it in practice, we would like to develop a test so we can take a sediment sample from a contaminated site and determine what would be a good donor cell for that specific scenario," she says. "We're still in the gray zone. We're trying to get to that next stage where we can say with certainty that, yes, if you inject these microorganisms, you will get degradation."

As part of the outreach/educational component of her grant, Gunsch works directly with the Durham public school system to bring science to minority middle-school students, mostly African Americans and Latinos.

"We go to the schools and teach a class that involves the material in the regular science curriculum," she says. "We teach to these students, for example, what DNA is and how it can be used. We have them isolate DNA from their cheek cells, and we play 'environmental detective,' which is similar to a criminal investigation, but focusing on pathogens. We give them a DNA sequence, and they have to identify what organism they have. We also teach them about environmental engineering to get them excited about potential jobs in the science and engineering fields."

As a woman, "being part of an underrepresented group in engineering, I feel that it's very important to reach out to up-and-coming scientists," she adds.