Hunting the spark of creativity 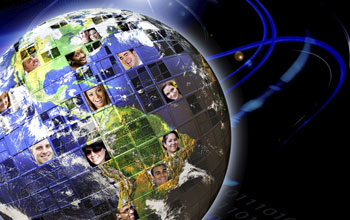 Scientist Ali Minai: A core concern of our research is the desire to catch 'creativity in the act.'

In his 1937 book, "Think and Grow Rich," author Napoleon Hill identified 13 steps to success, one of which was the power of the mastermind. "No two minds ever come together without thereby creating a third, invisible, intangible force, which may be likened to a third mind," Hill wrote.

He included the step to explain a principle of achievement--the standard idea that two heads, or a group of heads, are better than one at creating innovations. More than 75 years later, new research aims to put Hill's mastermind idea on steroids.

Until recently, decision makers could only effectively harness shared creativity from relatively small mastermind groups such as boards, panels or committees. Data from these could be placed in pre-organized, well-structured and well-categorized "buckets" to extract creative knowledge.

The relatively recent growth and development of the Internet, however, along with social network technology, provides an opportunity to expand the mastermind concept to hundreds, or thousands or even hundreds of thousands of geographically distant people.

University of Cincinnati (UC) complex systems scientist Ali Minai and a team of researchers funded by the National Science Foundation (NSF) are attempting to do just that--to develop computer-based tools to mine the Internet and communities of social media for creative insights.

But first, the researchers must clearly define the highly personal subject of creativity by types, kinds and categories to successfully identify it online. In addition, they must find a way to organize large amounts of unstructured, creative data--intermixed collections of text, video, images and other information.

To do that, the researchers are examining creativity in neural networks in the human brain; social networks related to interactions among people and networks of knowledge that develop in groups. And according to some observers, if successful, the project could be a game changer.

"It could be a huge, big deal," said Penn State University's Jack Matson, author of the book "Innovate or Die: A Personal Perspective on the Art of Innovation."

"Basically, cultures are innovation driven," he said, noting the market interconnectivity of nations like China and the United States. "Now that we're virtually connected, the ability to innovate is going to make or break countries and societies."

"The future of societies will depend more than ever on their innovativeness, and this will be enabled by connectivity," said Minai. "I think that professor Matson's statement is absolutely correct. The issue is how we can exploit the immense amount of knowledge that is latent in the networks that connect us and which is growing every minute."

The project, "The Hunting of the Spark: A Systematic Study of Natural Creativity in Human Networks," is one of 40 projects funded in the first round of an NSF initiative thataddresses extremely complicated and pressing scientific problems. Called INSPIRE, the initiative funds potentially transformative research that doesn't fit into any one, scientific field, but crosses disciplinary boundaries.

"There really is not one place in NSF for this type of research," said Betty Tuller, program director for the Perception, Action and Cognition program in NSF's Social, Behavioral and Economic Sciences Directorate, which contributed to the funding. "This is especially true for research that doesn't focus on a single, specific domain but instead aims at understanding the role of human and organizational networks in creativity per se."

The team, whose research has been ongoing since September 2012, includes researchers from four universities with extensive expertise in social psychology, computational neuroscience, cognitive science, computer science, engineering and network theory.

"One of the interesting things is their desire to automatically detect creativity using a system of human-centered computing," said Kevin Crowston, a program director in NSF's Division of Information and Intelligent Systems in its Directorate for Computer and Information Science and Engineering, which also funds the research. "There is a lot of interest in computationally mining the large corpora of text data from social networks for signals of innovation. I'd like to see how this turns out."

"Being able to extract ideas from social networks is very much the ultimate goal of our research, but a major issue is which real-world networks we can access for this purpose," said Minai.

In recent years, social media networks have been increasingly difficult to access. Because of structural and privacy concerns, accessing Facebook content for research purposes is extremely challenging. While Twitter is more accessible, only a fraction of the data stream can be collected and even then a lot of the data is just "noise."

These noisy data streams make the goals of the project harder to achieve. But Minai already has a group of UC graduate students, funded by a previous NSF grant, working to mine meaningful information from Twitter and other online sources.

He anticipates the two projects eventually will help open vast possibilities for shared creativity and innovation among the millions that use social media. He also anticipates the research could help many modern institutions, including elections, parliaments, governing boards, free markets and businesses. This is especially true of institutions that innovate using online presences.

"Social has been a part of the 'DNA' of ModCloth since its inception," said Jennifer Grasso, director of Product Management for ModCloth. "We recognized early on that creating a social experience on and off ModCloth enables customers to feel a much closer affinity with our brand."

ModCloth is a wildly successful online retailer that credits the collaborative approach of its social media network for spurring company growth to more than $100 million in revenue in 2012. It specializes in vintage, retro-inspired and indie clothing and decor. Fast Company business magazine ranked its use of social media as 2013's fourth most innovative and ranked ModCloth as one of the top 50 most innovative companies overall.

"ModCloth allows users to post reviews for every product they purchase, and to date, 83 percent of our products have customer reviews on the site," said Grasso, providing an example of how Minai and colleagues research into understanding the process of creativity, network interactions and analysis of unstructured data could benefit the company.

"These reviews are full of personal anecdotes about why an item did or didn't work. Comments about fit, quality, construction, personal style and a range of other information may be included in any given review. In customer research, we hear frequently from customers who tell us how useful these reviews are in helping them make a purchase decision.

"As a business, ModCloth could benefit from the ability to 'mine' the very varied, subjective information coming from these reviews. Are there trends we can elevate from this information around style concerns, fit issues or quality problems that can help us create a better shopping experience, sell more relevant products, or better meet our customers' needs?"

Subjective creativity: "How do we mine it?"

Grasso acknowledges, however, that creativity is incredibly subjective. She wonders, "How do we mine this type of data--not linear, not structured--and organize it into actionable insights for our business?"

She puts her finger on the nub of a major concern for the project's researchers. However, based on recent advances in computational linguistics and complex network analysis, the researchers may have a way to solve the problem. One potentially fruitful approach, they believe, is to look at structural elements within human and knowledge networks to uncover components of creativity.

The idea is to identify smaller sub-networks or modules within larger networks that people use to exchange information--that is identify modules that self-organize, carry out discrete functions and are strongly linked within themselves but weakly linked to other sub-networks in the larger group.

Minai and team are looking for similar modules in neural networks, knowledge networks and social networks. Once these modules are identified, whether online or in person, the researchers believe they can analyze them to determine the network's inherent "meaning," or in this case, study them for constituent creativity. Being able to take raw, unorganized data and analyze it in this way could allow organized mining of large amounts of unstructured creative data.

A core concern: Catching creativity in the act

The researchers say relatively little data is available on how the creative process develops over time in real-world groups, and what the key dynamics are in producing the most innovative ideas or products. They hope the insights gained from their work will provide both a theoretical and practical basis for understanding the process of natural creativity in individuals and networks.

"A core concern of our research is the desire to catch creativity 'in the act,'" said Minai.

The researchers are using a combination of field and laboratory studies to improve their understanding. Field studies use intelligent analysis and data mining to discover natural patterns of innovation in diverse communities of test subjects, e.g., research scholars or engineers. Co-principal investigator and Stony Brook University electrical and computer engineering professor Alex Doboli, who is an expert on data mining and innovation in engineering, will help develop a standard framework for such studies.

Minai and Hofstra University computer science professor Simona Doboli, also a co-principal investigator and an expert on brainstorming and neural networks, will generate computer models to analyze data from both laboratory groups and online sources. The models generated then will be tested more specifically in laboratory studies conducted by Paul Paulus and Jared Kenworthy, both co-principal investigators and psychology professors at The University of Texas at Arlington.

"What they're trying to do is make a fairly enormous leap in human ability to innovate by taking mass data from all these sites and trying to tweak where the innovations are, what's happening, where the trends are and how the remixing is going from culture to culture," said Matson, who recently headed a Coursera (a large-scale online educator) massively open online course on "Creativity, Innovation, and Change" that had more than 125,000 participants when it began in early September.

"In order for them to figure it out, it's going to take a lot of iterations, a lot of trial and error and I hope they are looking at it that way," he said.

"We would like people to see this research as an attempt to look at something that is the very essence of being human--creativity--but which is very difficult to study quantitatively," said Minai. "They should also understand that we approach this task with equal measures of excitement and humility."