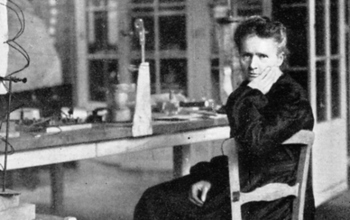 Marie Curie overcame incredible hardship while achieving a number of firsts among scientists.

Some may recall the way she personally transported her portable X-ray machines to the front lines in World War I. Others may remember the deal she made with her sister to wait her turn before attending the Sorbonne to become one of the world's most renowned scientists. And still others may recall how she bounced back after her husband's tragic death to continue their scientific inquiry on her own. But what most have heard about, been inspired by and been in awe of regarding Marie Curie is her undeniable courage and commitment to science.

"Life is not easy for any of us," she is quoted as saying. "But what of it? We must have perseverance and above all, confidence in ourselves. We must believe that we are gifted for something and that this thing must be attained."

This attitude is at the core of why we celebrate Marie Curie's 147th birthday on Nov. 7. Curie's birthday is an opportunity to reflect on that legacy while also pondering the role women have played and continue to play in advancing science.

"Women continue to make major strides in chemistry," Jacobs said. "Every year, ACS surveys its 163,000 members and in 1985, women made up 14.6 percent of ACS members in the workforce. Today, in 2013, there are more than twice as many women working in chemistry. Importantly, the percentage of women receiving Ph.Ds in chemistry has grown over 30 years from 8 percent to more than 35 percent. So there is huge progress being made.

"Having said that, women chemists still face numerous challenges and hurdles reaching the top of their profession in industry and as full professors on major faculties. So there is a need to continue to find ways to ensure that women are given every opportunity to contribute to the economic vitality of our great nation."

The American Institute of Physics (AIP) notes that the number of women faculty in physics continues to grow, but in 2010, it was only at 14 percent. However, data from AIP also show that in U.S. high schools--a point when interest in science can decline--the number of girls taking physics reportedly increased 161 percent between 1987 and 2009.

Among Curie's accomplishments: She was the first scientist to win two Nobel Prizes; she is the only woman to win the award in two different fields (physics and chemistry); she was the first female professor to teach at the Paris university, the Sorbonne; she is credited with discovering radium and polonium; and she believed so strongly in the benefits of X-rays that she personally delivered portable equipment (known as "Little Curies") to the battlefield to expedite and improve wounded soldiers' diagnosis and treatment.

Role model at a time when there were none

Walk into Rohlfing's office and one of the first things a visitor notices is the large photograph behind her desk of Dr., "not Mme.," Curie.

"She's iconic," Rohlfing says. "She wasn't just a great scientist but a strong woman as well."

Harkening back to when she first learned of Curie in junior high school, Rohlfing appreciated the singularity of a female scientist at a time when Ben Franklin and Sherlock Holmes also inspired her. "The only other woman chemist I knew of was Rosalind Franklin."

As she grew up and her career progressed, Rohlfing married a fellow chemist and raised two daughters, something she shares in common with Curie. "The only thing I'm missing are the two Nobel Prizes," she jokes.

But the most important similarity she has with Curie is a talent for math and science. Early on, she realized she had a natural aptitude that she likely inherited from her physicist father (Curie's father coincidentally taught physics.)

"When you are getting the highest grades in your classes, you don't really question whether you can do this [be a scientist]," she said. "But you start to notice that there are fewer and fewer women in your classes, especially once I was in grad school."

According to Rohlfing, her challenges in the workplace were different than her husband's, who wasn't asked whether he'd be coming back to work after their first child was born.

"I remember early on, going to large professional meetings, and there'd be no line to the ladies room," she chuckles. "Then somewhere in my late 30s, that changed. Numerically, we've made significant progress, but there's still not parity. However, I'm very optimistic. I see the fabulous science that NSF supports, and women are competing very well."

Courage in the face of adversity

Curie never really had an easy go of it, even as her career took off. She worked hard to find a way to get and finance her science education. At times, she was so impoverished, she reportedly survived (barely) on bread and tea. Her husband died tragically when he accidentally stepped in front of a horse-drawn wagon. Still, ailing health, negative public sentiment and the challenges of raising a family, never seemed to stand in the way of her significant scientific discoveries

"That's where I really identified with her," said Gervay-Hague. "How she carried on. She really proved herself."

Instead of learning of Curie in a scientific context like Rohlfing, Gervay-Hague was introduced to her in a middle-school French class. What led instead to Gervay-Hague's scientific pursuits was ultimately a long string of supportive male professors and mentors.

"They'd point out women scientists to me, but they were also just very supportive in their own right," she said. "Sure, I noticed that there weren't very many women in my classes--in fact, in grad school there were only six of us, and only three ended up getting Ph.Ds in a class of 35 or 40. But that really never bothered me. The support for my work was always there."

What wasn't there was infrastructure to compensate for time lost when women's careers took a backseat to starting families. "These days, family leave options have improved, and tenure clocks can be stopped," she said."We're seeing that having a family doesn't have to hold women back in their careers; they can be promoted in the same amount of time as male counterparts. This work/family balance is still tremendously hard, but that's why I have such incredible respect for women who are able to strike that balance."

One thing that hasn't changed is that cutting-edge science still has certain inherent risks. "She carried test tubes of radioactive material in the pocket of her lab coat," Gervay-Hague exclaimed. "We hear that and think it's crazy, but it just reminds us how researchers truly are at the frontier. They don't necessarily know what their work will mean or the safety precautions that might be necessary." Ultimately, it was that steady exposure to radiation that led to the leukemia that took Curie's life.

While Caldwell can extoll Curie's "mental, moral and physical courage" and how with every obstacle she encountered, "figured out a way to overcome them," her view of Curie shows the multidimensional nature of being a woman in science.

"I never had a role model," Caldwell said. "Don't get me wrong, I've known many scientists for whom I have a great deal of respect. But I've always been a person who did my own thing."

That said, she quickly pulls out her weathered copy of "Madame Curie," a biography that Curie's daughter, Eve, penned. "You know she didn't have a fancy lab. In fact, they were lucky to have a lab then at all," she remarks. "What Marie Curie did required exceptional drive, conviction, dedication from both her and her husband, who played an important role in these discoveries as well."

And as Caldwell talks about acceptance of scientific theory for that time period, when every scientist struggled for that precious acceptance, she raises the issue of who does the majority of scientific investigation. "There's too much of a tendency to only recognize the 'Curies' and ignore the majority of women scientists who are smart, productive researchers and who face obstacles much like Marie Curie did."

And then the list begins of unsung physicists who throughout history have been overshadowed by superstars, singing the praises of Lise Meitner, who worked with Max Planck; Katharine Blodgett, a physicist who worked at General Electric and invented "invisible" glass; and Alice Blanche Balfour, sister-in-law and lab assistant to Lord Rayleigh, aka John Strutt, who discovered argon.

It only starts with Marie Curie...

There is no question that Curie and the other minority chemists and physicists who lead the way do make a difference to young people, whether they are girls or others who are underrepresented in these disciplines. Standing in the spotlight can bring a level of reality to something that seemed unattainable. Ultimately, Rohlfing, Gervay-Hague and Caldwell all concluded with the thought that diversity among scientists makes for better science.

"Science only advances if we have different perspectives," Rohlfing said. "Consequently, diversity is at the cornerstone of good science."

Gervay-Hague looks to today's youth at finding that diversity. "Capturing the imagination of high schoolers is hard to do because, let's face it, at that age, most are distracted and certainly not wanting to pursue 'uncool' endeavors," she laughs. "If we can cast a broader net and attract more people to these fields, we have a much richer outcome."

Caldwell added, "It is so important for universities to create an environment that welcomes everyone. You want all the talent you can get. We need to be better at identifying talent, no matter where we find it, and promoting it. If you exclude any group, you exclude talent possibilities."