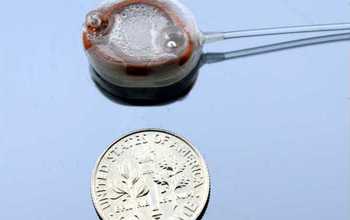 Researchers are developing this infusion micropump prototype into a manufacturable device.

Treating pediatric brain cancer can be a challenge, since the brain has ways to protect itself from drugs taken orally or intravenously. One solution to this frustrating problem: A miniature, implantable infusion pump no bigger than two small cookies stacked together.

The hope is to improve the treatment for a devastating type of cancer, leptomeningeal metastases, which afflicts the lining of the brain and spinal cord. The device, when implanted in the abdomen, would send chemotherapy into the spinal fluid for direct delivery to the brain, a process infinitely easier for young patients who otherwise must endure uncomfortable spinal taps several times a week, and a hospital stay. The pump would send the correct amount of medicine where it is needed, and, just as important, would allow children to remain at home while they are undergoing treatment.

"With this disease, you need a lot of drug, since the spinal fluid is constantly being made and replenished, every six hours," says Ellis Meng, a National Science Foundation (NSF)- funded scientist who is associate professor of biomedical and electrical engineering at the University of Southern California (USC). "So it makes sense to treat with this type of pump, because we have the ability to dose frequently."

To be sure, implantable pumps are not new. They play an important role in treating many severe diseases, and often are the last line of defense when less-invasive approaches are not an option. But the technology behind this still experimental new pump is an innovation. It is a tether-free, wirelessly activated release system that precisely controls the infusion of drugs into the body using "bubble power," that is, the power of electrolytically generated bubbles, rather than a motor--a feature that makes it different from other infusion pumps.

"We use a simple technique to electronically control how much drug is pumped, when it is pumped and how often it is pumped," Meng says. Also, the pump is fully implantable, and not tethered to an outside power source, appealing because "humans want to be able to move around and experience daily life and not be reminded all the time of being ill," Meng says.

Meng decided to pursue research that could help children because "pediatric populations are underserved by medical devices," she says. "They get adult devices put in after the fact. They don't benefit from devices specifically designed for pediatric populations. After evaluating the needs of this particular condition, it really fits what we do."

In the fall of 2011, Meng was among the first group of scientists to receive a $50,000 NSF Innovation Corps (I-Corps) award, which supports a set of activities and programs that prepare scientists and engineers to extend their focus beyond the laboratory into the commercial world.

Meng is an inventor, researcher, and now entrepreneur, whose work has produced six patents and more than a dozen patent applications. To further commercialization of the new pump, she co-founded Fluid Synchrony LLC, a startup company looking to promote these high performance micro-pumps for laboratory research, preclinical research and, ultimately, for use in humans.

The pumps are not yet available on the market; they are, in fact, undergoing their own animal studies to ensure the devices are safe, and that they work. Human trials likely are several years away.

Her work on miniature pumps began in 2004, shortly after she arrived at USC, when she began working with a USC ophthalmologist on an implantable infusion pump for the eye, a process to replace the current practice of direct needle injections. Several chronic eye diseases, macular degeneration, for example, require regular, frequent shots directly through the eye wall.

"This puts a huge burden on the medical system," Meng says. "The idea is to avoid frequent trips to the doctors for these injections, which can be traumatic. You put the implant in the eye wall, and it continues to dispense the drug until it runs out. The only thing you have to do is get the device refilled."

Her research on this project ended once her collaborator ophthalmologist formed his own startup company. But it prompted Meng to explore additional opportunities for her pump technology, ultimately leading her in two directions, the aforementioned pediatric cancer, and drug research, specifically providing an improved drug delivery system for scientists to use in animal studies of experimental drugs.

She explains: "Drug researchers first study their drugs in animals. How do you give a drug to an animal? It's difficult to get them to swallow. The next option is injection, but animals experience stress, just like humans. If you trigger stress, it will affect drug response. Also, animals don't like external pumps; they want to move around, just like people. Putting in an implantable device will allow you to dose an animal without the animal being stressed."

This aspect of her work "will enhance a researcher's ability to better understand drug dosing and safety, and speed up drug development," Meng says, adding: "We hope to reduce the time it takes to develop a new drug."

She believes that, ultimately, the pump will provide a safer, more convenient and comfortable alternative to current drug delivery approaches. "The NSF I-Corps experience was instrumental in getting this technology one step closer to the hands of patients," she says.