Results could lead to new materials for more effective superconductors 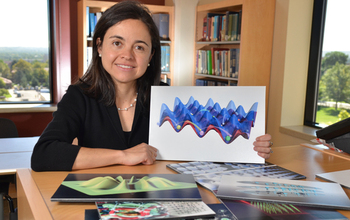 Ana Maria Rey of the University of Coloardo Boulder, received a MacArthur Fellowship in 2013.

Theoretical physicist Ana Maria Rey uses the computer, as well as pencil and paper, to develop mathematical models that describe the behavior of ultra-cold atoms. The idea is to use these systems to learn more about condensed matter physics and quantum mechanics with the goal of inspiring new materials, precision measurements and quantum information.

Using ultra-cold atoms, "we aim to develop synthetic materials that do not exist in nature, but which can help us understand materials that do exist in nature," says National Science Foundation (NSF)-funded scientist Rey, a research assistant professor in the University of Colorado Boulder's Department of Physics and a fellow at JILA, a joint institute of the university and the National Institute of Standards and Technology.

"Electrons in solids can exhibit rich behavior, complex behavior, that we do not understand," she adds. "This behavior comes from interactions of many electrons. When the electrons in the solids interact and see other electrons, the laws of quantum mechanics govern how they behave. This is very complicated behavior. This behavior is so complex that even a classical computer cannot solve it."

Rey is a recent recipient of one of this year's prestigious MacArthur fellowships, a $625,000 no-strings-attached award, popularly known as a "genius" grant. These go to talented individuals who have shown extraordinary originality and dedication in their fields.

She also has received about $500,000 in NSF funding since her arrival at JILA in 2008 for work that includes modeling the behavior of ultra-cold atoms and polar molecules.

Rey and her colleagues create artificial materials by trapping atoms with light. In order to do this, "we have to make them very cold," she explains. "We then use lasers to try to mimic the potential that electrons feel in real solids."

Ultimately, her research could lead to new materials for more effective superconductors, as well as new magnetic behavior that could speed up computer development. One of the eventual goals, for example, is to develop new materials that superconduct at room temperature, rather than only in extreme cold.

"This will help everything, because nowadays you have to cool the materials down, which is very expensive," she says. "If we don't have to cool them down, everything that uses superconductivity can be made much less expensively."

She also is developing a comprehensive theoretical framework for an optical-lattice quantum computer based on alkaline earth metals, and she already has proposed solutions for problems associated with storing, addressing, and transporting qubits, which are the quantum equivalent of traditional computing bits.

Among other things, she is attempting to resolve long-standing obstacles to large-scale entanglement between atoms, which quantum computers require both for communication and calculations.

"We want to use atoms trapped in light to create a quantum computer," she says. "The internal levels of the atom are the qubits of the computer. For example, we are proposing atoms in the second column of the periodic table--alkaline Earth elements, such as strontium--which have large number of degrees of freedom to improve computation capabilities."

Finally, she also is working on advances in developing an optical atomic clock.

"Atoms are a tool that allows us to measure time in a very precise way," she says. "The energy levels of an atom are like the ticking of a clock. The higher the energy separation between levels, the more ticks you have and the more precise your clock.

"The atomic clock measures time, and to measure time better, we need more atoms," she says. "The more atoms we have, the higher the signal-to-noise ratio, meaning that in principle, the clock is more precise."

One persistent problem, however, is that atoms collide, "and that is bad for the clock," she adds. "What I have done is try to understand the origins of these collisions, and try to control them in order to improve the clock."