3-D printing and custom manufacturing: from concept to classroom 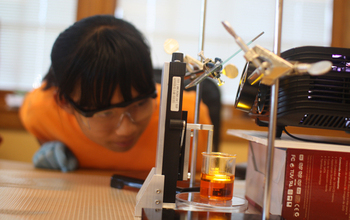 A student in Champaign, Ill., creates an object with a classroom 3-D printer.

Additive manufacturing, the technological innovation behind 3-D printing, has revolutionized the way we conceive of and build everything from electronic devices to jewelry to artificial organs.

It is not surprising that this field has enjoyed enormous economic returns, which are projected to grow over the coming decade. According to a recent industry report prepared by Wohlers Associates, 3-D printing contributed to more than $2.2 billion in global industry in 2012 and is poised to grow to more than $6 billion by 2017.

While both public and private investments contributed to the development of this technology, the National Science Foundation (NSF) provided early funding and continues to provide support for additive manufacturing, totaling approximately $200 million in 2005 adjusted dollars from more than 600 grants awarded from 1986-2012.

Although a wide range of programs across NSF have supported this endeavor, greater than two-thirds of the awards and more than half of the agency's total financial support for additive manufacturing was provided by NSF's Directorate for Engineering, which promotes fundamental and transformative engineering research and education through a broad range of programs and funding mechanisms.

"Additive manufacturing is a great example of how early NSF support for high-risk research can ultimately lead to large-scale changes in a major industry," says Steve McKnight, director of the Engineering Directorate's division of Civil, Mechanical, and Manufacturing Innovation (CMMI).

What is additive manufacturing?

Compared to traditional manufacturing techniques, in which objects are carved out of a larger block of material or cast in molds and dies, additive manufacturing builds objects, layer by layer, according to precise design specifications.

Because there are no dies or molds to be cast, design changes can be made more quickly and at a lower cost than ever before, increasing the level of customization that individuals and businesses can achieve "in house."

"Additive manufacturing technologies have changed the way we think about the manufacturing process," says NSF Assistant Director for Engineering Pramod Khargonekar. "It has reduced the time, cost, and equipment and infrastructure needs that once prevented individuals and small businesses from creating truly customized items, and accelerated the speed at which new products can be brought to market."

"The STRATMAN came at an incredibly important time," says University of Texas at Austin mechanical engineer Joseph Beaman. "We had some of the IP [intellectual property] there, but we needed a way to get the basic engineering done to show that we could really make it work."

Beaman and then UT graduate student Carl Deckard were the first to demonstrate and commercialize a process known as selective laser sintering, in which a high powered laser is used to fuse small particles into precise 3-D shapes.

"The purpose of the STRATMAN Initiative was to provide critical early funding to radically new ideas with the potential to impact future manufacturing technology," says Bruce Kramer, the CMMI program officer who made the original award to Beaman. "The research that Joe and Carl did with the STRATMAN hit a home run by laying the foundation for one of the key additive manufacturing technologies in use today."

Setting goals for a fledgling field

In addition to contributing to transformative fundamental research, the Engineering Directorate has supported a number of workshops and conferences designed to establish roadmaps and benchmarks for the field as it evolves.

Together with support from agencies including the Department of Energy, Defense Advanced Research Projects Agency, and the Office of Naval Research (ONR), the Engineering Directorate has sponsored workshops on rapid prototyping, additive and subtractive manufacturing and has consistently provided support for student travel to additive manufacturing conferences.

A 2009 workshop sponsored by NSF and ONR intended to identify the future of freeform processing is widely recognized as having been critical in defining future research directions in the field.

Transitioning research to the marketplace

Initial investments by the Engineering Directorate's Small Business Innovation Research (SBIR) program also were made to two key early firms in the additive manufacturing field including: DTM, acquired by 3D systems and founded by Carl Deckard, to develop the selective laser sintering process and Helisys, formerly Hydronetics and founded by Michael Feygin, to commercialize the sheet lamination process.

"The SBIR program helps scientists, engineers and entrepreneurs at early-stage start-ups mitigate risks, develop the technology into a marketable and scalable product and be better positioned in the marketplace," says Grace Wang, director of the Engineering Directorate's Industrial Innovation and Partnerships division.

While neither firm exists today, their contributions live on in the form of the universal industry standards they helped establish.

"The RapidTech Center has increased the number of students who transfer into UCI Engineering programs and improved current engineering student's performance," says Celeste Carter, a program director in NSF's Directorate for Education and Human Resources. "Programs like this are, and will continue to be, incredibly important in preparing the future engineering workforce."

Looking to the future

As part of the president's plan to catalyze manufacturing innovation, the National Additive Manufacturing Innovation Institute, recently rebranded as "America Makes," was launched in August 2012.

The institute, which was convened on the recommendation of experts from NSF, the Department of Energy, the Department of Defense, National Aeronautics and Space Administration, and the National Institute of Standards and Technology, represents a partnership that includes manufacturing firms, government agencies, universities, community colleges and non-profit organizations. The goal of the institute is to accelerate additive manufacturing innovation by bridging the gap between basic research and scalable technologies.

In addition to contributing oversight and management to the America Makes initiative, NSF has invested in programs designed to facilitate collaboration and engage NSF-sponsored researchers and educational programs in the institute's activities.

"We are only beginning to see what is now possible because of additive manufacturing," Khargonekar says. "The Engineering Directorate is proud to have been among the many public and private organizations to provide early and continued research support leading to this significant and impactful innovation."

For more information, see the 2013 report, The Role of the National Science Foundation in the Origin and Evolution of Additive Manufacturing in the United States, funded by NSF and prepared by the Science and Technology Policy Institute.