'Smuggling' drugs at the cellular level

Drexel researchers use ultrasound to deliver customized medication through the skin 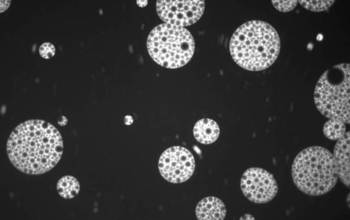 Medicated adhesive patches have become a preferred method of delivery for everything from nicotine to hormones to motion sickness medication.

Drexel University researchers are trying to expand the possibilities of this system--called transdermal delivery--with the help of a cleverly designed delivery vehicle and an ultrasonic "push," or pressure from sound waves.

The advantage of transdermal drug delivery is the ability to regulate the release of medication into the bloodstream and promote a more direct interaction of the treatment with the affected area. But the challenge of this method is that the skin is very good at protecting the body from invaders--even the helpful kind.

Molecules of nicotine and medication currently delivered via adhesive patch are small enough to pass through the pores. To sneak a slightly larger package--say, insulin or arthritis medication--past the body's epidermal defenses requires a bit more biological trickery.

Steven P. Wrenn, of Drexel's College of Engineering, and Peter A. Lewin, from Drexel's School of Biomedical Engineering, Science and Health Systems, are driving forces behind this research. Their team is investigating the molecular architecture of human skin and certain promising drugs and compounds, as well as the mechanics of an ultrasound interface necessary to broaden the capabilities of transdermal drug delivery.

Their work is part of a larger trend: More and more, researchers are exploring advanced materials and manufacturing techniques for biomedical applications. New, high-precision technologies and more rapid, personalized fabrication methods allow engineers to design on smaller scales, such as those required to traverse the human body.

The Drexel team is looking at a drug called Methotrexate (MTX) as an example of the cargo that could one day be transported into the body using an ultrasound "Band-Aid." MTX is used to treat arthritis and various types of cancer. It is typically taken orally, but after prolonged use it can become toxic to the liver. This side effect could be avoided if the drug were delivered transdermally, as afflicted cells would use up much of the medication before it could reach the liver.

It's not an ideal candidate for topical application, however, because its molecules are too large to easily pass through the pores of the skin. It is also easily dissolved in water, which means that, to be effective, it must be contained and protected until it reaches its destination.

Wrenn's group is designing a vessel that can transport the medicine and penetrate the skin's first line of defense: the stratum corneum. This barrier is the body's equivalent of a brick wall built with dead skin cell bricks and a lipid mortar.

The group selected the liposome, a fabricated lipid sac filled with water, as the carrier. Liposomes are prime candidates for the job because they are made of the same lipid substrate as the stratum corneum's "mortar," so they can pass through the skin virtually unnoticed.

The team is also engineering the sacs so they're hearty enough to survive a transdermal push, but capable of being opened to release the medicine once inside the body.

The push and the pop

After coaxing the liposomes through the epidermis, the tunable ultrasound patch would "pop" them open to deliver the medicine.

But this interaction is where the real problem lies. The liposome, while a perfect craft for making a stealthy, transdermal entry is not rugged enough to withstand the intensity of ultrasound required to push it through the skin.

Wrenn's group devised a creative solution to this quandary by adding a bit of ballast to the liposome vessel, in the form of tiny gas-filled sacs called microbubbles.

Microbubbles respond to ultrasound in two ways that are key to making the liposome's transdermal voyage a success. First, they can be pushed by ultrasound at an intensity gentle enough to keep the liposome intact. So, nesting the microbubbles inside a liposome is analogous to raising the sail on a boat to catch the wind.

Secondly, when the intensity of the ultrasound is turned up a bit, it causes microbubbles to wobble like a spring and--if the intensity is high enough--pop. Wrenn's group has shown that these gas implosions in the vicinity of the liposome can rip it open, thus allowing disbursal of its contents.

A significant advantage of their approach over current transdermal delivery methods is that it could easily be customized to work for a broad array of drugs and other biological products.

By combining these findings, the team suggests that a liposome laden with a payload of medicine and using microbubbles to sail an ultrasonic "wind" should be able to traverse the epidermis and enter the body. An adjustment to the ultrasound frequency could then pop the microbubbles and split open the liposome to release the medicine.

With a hefty amount of research on liposome architecture underway, the next step for the group will be to fine-tune the ultrasound patch delivery system and work toward a successful transdermal push.