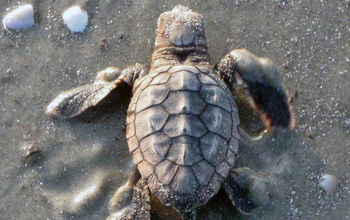 After climbing out of their nests, hatchling sea turtles make their way to the sea.

Physicist Daniel Goldman and his fellow researchers at the Georgia Institute of Technology shed light on a relatively unexplored subject--how organisms such as sea turtles and lizards move on (or within) sand.

If you've ever struggled to walk with even a modicum of grace on a soft, sandy beach, you may appreciate the question. The answers that Goldman's CRAB lab (Complex Rheology and Biomechanics Laboratory) uncovers--with the help of living animals and biologically inspired robots--deepen our understanding not only of animal survival, evolution and ecology, but also, potentially, the evolution of complex life forms on Earth. The lab's research also assists the design and engineering of robots that must traverse unstable, uneven terrain--those used in search and rescue operations at disaster sites, for example.

Goldman first investigated the properties of sand, which can act like a solid, fluid or even a gas, when he was a doctoral student of physics at University of Texas at Austin. Later, as a postdoc in the University of California-Berkeley lab of biologist Robert J. Full (a leader in the field of nature-inspired robots), he helped investigate locomotion on complex terrain--cockroaches' climbing of vertical surfaces, for example, or spiders running over surfaces with few footholds. A fellow researcher, Wyatt Korrf, was interested in movement on a different kind of complex terrain--granular, shifting media. Goldman became hooked, and the two men started working together.

"Some of the insights and tools we developed then were incredibly helpful in my early and current research, in particular, air fluidized beds as a way to control ground properties," Goldman says.

To a student or lover of critters, Goldman's job might seem like a dream. He has worked with a large variety of desert dwellers and other animals, including geckos, zebra-tailed lizards, sidewinders , ghost crabs, sandfish, wind scorpions, funnel weaver spiders and hatchling loggerhead sea turtles.

In the lab and in the field, he and his colleagues observe these animals as they creep, crawl, walk, run, slither and otherwise transport themselves over or in granular matter. The researchers pin down precise details--the flexible spines on a spider's legs that appear to facilitate movement over a wire mesh, for example, or the way a snake flattens itself when climbing a slope. Then they design robots with the physical elements and movement patterns they want to know more about. With these tests as well as computer simulations and analyses, the team can develop, challenge and refine hypotheses related to physics principles inspired by the animals' movements.

The CRAB lab's cast of robot characters to date includes a robot modeled after baby sea turtles, as well as a sandfish robot.

Recently, the team studied newly hatched sea turtles hurrying across the beach to the sea--a treacherous journey many of us have seen in nature TV shows.

"The best robots people design and build can't out-compete a hatchling sea turtle whose life consists of swimming all the time and using these appendages on land only for half an hour, running from the nest. If a female makes it to adulthood she will use flippers again, of course, to lay eggs," Goldman said.

For this study, CRAB lab researcher Nicole Mazouchova and research technician Andrei Savu traveled with a mobile lab to Jekyll Island in Georgia. They video-recorded hatchlings' movements on the beach and in a portable test bed. Analyzing the videos back at the lab, they saw that on more packed sand, the baby turtles used their flippers as rigid struts and to pivot. On looser sand, however, the turtles dug in deeper and bent their wrists.

With the help of Flipperbot (you guessed it, a robot with flippers), a poppy-seed-filled test bed, plus theoretical modeling by mechanical engineer Paul Umbanhowar of Northwestern University (who also helped make the 'bot), the team confirmed that the turtles' wrist bending helped them avoid slipping and kept their bodies above the sand, minimizing friction and drag. The model revealed how digging in deeper to more sand provided greater efficacy, keeping the substrate from yielding underfoot.

"We found [the turtle] extremely sensitive to how deep it puts its flippers into the ground and that it did better when it bends its wrists," Goldman said.

They also found the turtles (and Flipperbot) were seriously hindered when trying to navigate sand that had already been disturbed by movement.

Flipperbot--whose movements are surprisingly graceful--is the first robot modeled on sea turtles and tested on granular materials. Its work may someday help engineers make more agile robots as well as advance our understanding of evolution on Earth--especially those first walkers to emerge from the sea.

"There is a lot of speculation about the mechanics which allowed early animals to walk on land," says Goldman. "They had hand-like fins or finlike feet and nobody knows in detail how they would have interacted with flowable substrates (like mud and sand)

"We have an eye on biological questions of existing organisms but also those who could have lived in the past. If you look at gazelles, cheetahs--these animals are incredibly agile over terrestrial ground, and they came from things that had no concept of terrestrial ground."

The Flipperbot findings may be useful in other ways as well, such as informing sea turtle conservation strategies.

In various studies, Goldman's team has uncovered patterns that can help the engineering of search and rescue robots designed to move over and into debris piles and wreckage. It confirmed, for example, something scientists long suspected--that the chiseled head of the sandfish--a lizard found in north Africa--helps it dive underground. Robot tests showed that the angular head shape not only reduces drag but also generates greater lift forces.

Using x-ray imaging to reveal how the sandfish moves under the surface, the researchers found that to escape predators the little lizard tucks its limbs close to its body and undulates through the sand--looking like a true swimmer. The sandfish uses a consistent wave pattern from head to tail that pushes its body against the sand and generates forward motion. This wave pattern optimizes speed and energy use.

In a more recent study involving a six-legged robot, the team used 3-D printing technology to make legs of different shapes and physical orientations, and learned that convex robot legs made in the shape of the letter "C" worked out best.

It may be tempting to regard the CRAB lab's unique robots as the end rather than the means of research. But the machines are first a way to develop and confirm hypotheses, Goldman says. The lab, which is funded in part by National Science Foundation's (NSF) Physics of Living Systems and Dynamical Systems programs, is steadily identifying basic principles that will significantly advance understanding of how objects move on or in granular media.

"The idea is to begin to develop a terradynamics--equivalent to aero- and hydrodynamics--which will allow us to predict mobility of devices in these complex environments," Goldman says.

The lab has had recent success in terradynamics, publishing a paper in Science that describes a new approach to predicting how small-legged robots move on sand or other flowing materials. The approach uses the forces (such as drag) applied to independent elements of the robot legs to get a measure of the net force on a moving robot (or animal).

"The lizard swimming in sand gives us a broad understanding behind all animals swimming in true fluids," Goldman says. "Analyzing sandfish turns out sufficiently simple we can use as a baseline to understand other swimmers."

What specific studies are up ahead for the busy Georgia Tech lab? In the near future, the team will test and refine theoretical models as they apply to legs and wheels thrusting into flowing material. They also will be conducting experiments to learn more about wet sand versus dry. And thirdly, they will be looking at the physics involved when teams of organisms, such as fire ants, move and dig within complex terrain.

Editor's Note: This Behind the Scenes article was first provided to LiveScience in partnership with NSF. --  Jacqueline Conciatore, (703) 292-8367 jconciat@nsf.gov