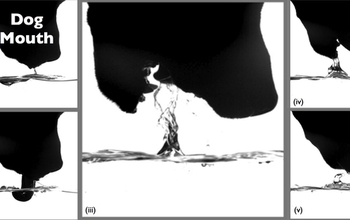 These image sequences show how a dog drinks water.

Have you ever watched your cat or dog drink water?

Their lapping motions, which differ from the way humans drink--and also differ in some respects from each other--are an evolutionary marvel of nature.

Cats and dogs, many other animals, have developed survival mechanisms over time that help them adapt to their environments, in this case, figuring out a way to get water into their mouths when the location of the water is low and the animals' location is high.

The way they do it provides important information for scientists trying to apply biological behavior to human engineering, especially in the field of fluid mechanics, which studies liquids and gases and the forces upon them.

"Nature has spanned billions of years finding the best designs for its many systems," says Sunghwan Jung, an assistant professor of engineering, science and mechanics at Virginia Polytechnic Institute and State University. "Human engineering can learn much from how nature does it."

Jung and his colleagues--Jake Socha, also an assistant professor of engineering, science and mechanics at Virginia Tech, and Pavlos Vlachos, a professor of mechanical engineering--all National Science Foundation (NSF)- funded scientists, have been studying the drinking behavior of both domestic animals.

Their findings could have significant applications in the development of novel coating/dipping systems for materials engineering, as well as in designing new types of pumps to transport water, with potential uses in the military, in industry and recreation.

The cat's method relies on its instinctive ability to calculate when gravitational forces overcome inertia, causing the water to fall. A cat curves the upper side of its tongue downward so that the tip lightly touches the surface of the water, then pulls it upward at a high speed, creating a column of water behind it. At the very moment that gravity starts to pull the column down, the cat closes its jaws over the jet of water and swallows it.

The dog, on the other hand, appears to scoop water into its mouth, using its highly curled tongue. The amount of water ingested depends on the lapping frequency, and the size of the air cavity created by its tongue.

Both animals create columns of water when they do this, but only the dog's tongue uses a scooping motion.

Their research could influence the future design of water pumps, Jung says. There are two main types used today, pressure-driven pumps and inertia-driven pumps. The former involves sucking water up through a tube, while the latter uses a moving part--a water wheel, for example--to move water from a low place to a high place.

The water drinking methods used by dogs and cats are examples of inertia-driven pumps. "Their tongues are the moving parts," Jung says. "There may be places where you cannot use a pressure driven pump. Perhaps we can design some bio-inspired pump by learning how cats and dogs drink water."

Jung and his colleagues are conducting their research with a grant from NSF's Physics of Living Systems program, which supports theoretical and experimental research exploring the most fundamental physical processes that living systems use to perform their functions in dynamic and diverse environments. The focus is on understanding basic physical principles that underlie biological function.

As part of their experiments, the team will create artificial three-dimensional tongues of both dogs and cats and plans to "actuate these artificial tongues in rotational motion, mimicking what cats and dogs do, to understand the fluid dynamics," Jung says. "We want to see how fluids move due to the tongues' motion, and how water is transported upward."

Along with water drinking, the scientists also are studying how some animals--lizards and frogs, for example--move effortlessly across a water surface or jump from it to capture insects for food. The idea is to gain new insights about locomotion and propulsion.

"Since there are no engineered systems that operate under conditions similar to these reptiles and amphibians, we have an opportunity to learn how nature effectively uses the interaction of these forces," Jung says.

In addition to faster dipping and coating processes, their findings also could produce "water-walking robots," he says.

"Nature is very smart," he adds. "In nature, animals both move around a lot and also drink fluids. Those two are everyday essential behaviors. Most animals have evolved to optimize these behaviors, and their methods can teach us quite a bit."