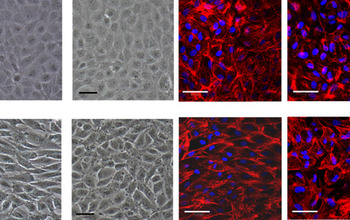 People with diabetes develop early and severe heart disease, specifically atherosclerosis, a condition in which plaque builds up inside the arteries. Alisa Clyne, a mechanical engineer by training, wants to better understand the biomechanics of this process.

"We know people with diabetes get these plaques but not why they are more severe with diabetes," says Clyne, an associate professor of mechanical engineering and mechanics at Drexel University. "Could there be a mechanical aspect to it?"

The National Science Foundation (NSF)-funded scientist specifically is studying the behavior of endothelial cells, which form the inner layer of blood vessels, and which "sense the mechanics of their environment and respond to it," she says. "They are exposed to a variety of mechanical forces, mostly from blood flow."

Moreover, blood flow, specifically shear stress--the force of flowing blood on the endothelial surfaces--cause the cells to react in multiple ways. "Atherosclerosis occurs in locations where there are disturbances in the blood flow," she says. "We want to know if the relationship between atherosclerotic plaque development and endothelial response to fluid flow is altered in diabetic conditions."

With normal flow, "your endothelial cells should not be dysfunctional, and you should not get plaque," she adds. "So the question for us is, if you change the endothelial cell environment to simulate a diabetic condition, such as high blood sugar, would there be a change in the way the cells are able to respond to fluid flow?"

Insights into the role of these cells in plaque development potentially could provide new ideas for drug development, as well as tissue engineering applications, such as designing new blood vessels.

"This information about how the cell mechanisms respond to blood flow is important," Clyne says. "For example, you could tissue engineer a better blood vessel for coronary artery bypass surgery by understanding how the endothelial cells respond to flow in a diabetic environment."

Clyne is conducting her research under an NSF Faculty Early Career Development (CAREER) award, which she received in 2009. The award supports junior faculty who exemplify the role of teacher-scholars through outstanding research, excellent education, and the integration of education and research within the context of the mission of their organization. NSF is funding her work with about $400,000 over five years.

Endothelial cells align and elongate in the direction of the shear stress, and change some of their functions as well. For example, in response to increased shear stress, endothelial cells produce more nitric oxide, a vasodilator which causes the blood vessels to expand. This physiological response decreases blood velocity and thereby reduces shear stress down to the original level. Nitric oxide also scavenges reactive oxygen species and reduces inflammation, both of which are factors that contribute to atherosclerotic plaque development. If endothelial cells do not produce nitric oxide in response to shear stress in a diabetic environment, this could contribute to atherosclerosis in people with diabetes.

In her experiments, Clyne cultures endothelial cells in a parallel plate flow chamber, which allows her to put "flow" over the cells to simulate the stresses they would experience in the human body. "We added high sugar levels to see how the cells would respond in normal flow," she says.

"One thing high sugars do is change the structure of proteins," she explains. "There are proteins underneath the endothelial cells, and the cells attach to them. The one we study in particular is collagen. As we age, or if you have high sugar levels, the collagen becomes glycated, meaning that sugar attaches to one of the collagen amino acids. When the cells are attached to glycated collagen, rather than normal collagen, it changes how they respond to fluid flow. "

The researchers measured the responses, including the release of nitric oxide, and found that the cells "don't align in the flow direction or release nitric oxide when they are on glycated collagen," she says. " The way in which cells adhere to the substrate proteins changes many signaling pathways in the cells. Our cells adhere to glycated collagen in a different way from native collagen, and this changes the way that they are able to respond to mechanical forces from fluid flow."

The researchers also looked at the effects of increasing sugar levels in the cultured cells and found that high sugar levels--and low sugar levels--also changed the way the cells respond to fluid flow. "So if you are at either extreme, you're in trouble," she says. "Sugar can either directly affect the cells or affect the proteins the cells adhere to, so it has two effects."

As part of the CAREER educational component, Clyne's lab is conducting an outreach program with the Girl Scouts, including a "Science Saturdays" program at Drexel, bringing in junior high school-age scouts for up to six Saturdays to teach them about different kinds of engineering, and how engineering applications can solve human health problems. The scouts are paired with mentors, who are Drexel engineering undergraduate students.

"Over the course of the program, they also worked on a design project related to biomedical engineering. One year, the girls created solutions that would help soldiers coming home from the war without a limb," she says. "One group made a gripper hand to help with eating, whereas another group made a device to improve balance using a prosthetic leg. The girls learned about how engineering contributes to helping others, which hopefully will encourage them to consider engineering careers."