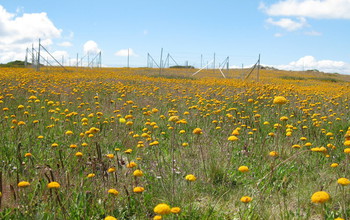 Spring wildflowers with Nutrient Network fences, in the mountains of southeastern Australia.

It all comes down to the light. At least in plant species diversity in fertilized grasslands.

Fertilizing by humans and plant-eating by herbivores can combine to benefit plant biodiversity--if enough light still reaches the ground, according to results of a study by ecologists Elizabeth Borer and Eric Seabloom of the University of Minnesota and colleagues.

The findings, published this week in the online edition of the journal Nature, are important in a world where humans are changing both where herbivores are found and the supply of plant nutrients such as nitrogen, phosphorus and potassium.

To conduct the study, Borer and Seabloom enlisted the help of the Nutrient Network, or NutNet, an experiment they and other researchers began as a way to understand how grasslands around the world respond to changing environments.

The scientists' hypothesis was that grassland plant species losses caused by eutrophication (overfertilization) could be offset by the increased light availability that results when taller plants are munched down by herbivores like deer and sheep.

The experiment, replicated in 40 grasslands on six continents, demonstrated that the researchers had it right.

"Global patterns of biodiversity have largely defied explanation due to many interacting, local driving forces," says Henry Gholz, a program director in the National Science Foundation's (NSF) Division of Environmental Biology, which funded coordination of the research, along with the many institutions involved.

"These results show that grassland biodiversity is likely largely determined by the offsetting influences of nutrition and grazing on light capture by plants," Gholz says.

In the study, the ecologists measured the amount of plant material, the light reaching the ground and the number of species of plants in the plots.

When the scientists compared results across the sites, they found that fertilizer both reduced the number of plant species in the plots and favored those that were faster-growing. Species less able to tolerate a lack of light in shady conditions were literally overshadowed by their faster-growing neighbors.

So there were fewer kinds of plants, but taller-growing ones.

In both fertilized and unfertilized plots, removal of vegetation by herbivores increased the amount of light reaching the ground. The taller plants were eaten by the herbivores. Then plant species diversity increased.

The results were the case whether the grassland was in Minnesota, the United Kingdom or Tanzania, and whether the herbivores were rabbits, sheep or elephants.

"This suggests that these effects dovetail with changes in light availability at the ground level," says Borer. "That appears to be a big factor in maintaining or losing biodiversity in grasslands."

Light a key piece of the puzzle

The findings offer important insights into how humans are affecting prairies, savannas, alpine meadows and other grasslands by adding fertilizers.

In showing how fertilization, grazing, light availability and biodiversity are linked, scientists are closer to understanding grassland ecosystems in a changing world.