Finding a formula for zzzzzzzs

Math and a good night's sleep 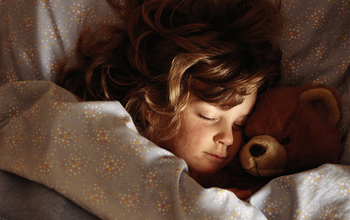 We boast when our infant finally sleeps through the night. We bemoan the teenager who requires a cannon shot to arise from his bed before noon. And in our "golden" years, we wonder why sleep is so fleeting, yet napping seems to come as easily as breathing. Such are the mysteries of sleep.

And when we think of a way to understand sleep and wakefulness better, it's natural to think of biologists, behavioral scientists, neuroscientists and even mattress makers who for years have studied all kinds of animals and approaches to help us get a better night's sleep. The Centers for Disease Control (CDC) reports that 70 million Americans suffer from chronic sleep problems that range from insomnia and sleep apnea to narcolepsy, restless legs syndrome, and circadian rhythm disorders.

These days, researchers have found that in taking a collaborative approach to addressing sleep-related issues, mathematics needs to be part of the equation.

Janet Best, a National Science Foundation (NSF)-funded mathematician at The Ohio State University who is affiliated with the NSF-funded Mathematical Biosciences Institute there, has spent the past 10 years studying sleep-wake cycles using mathematical models.

"To understand sleep, we try to reformulate biological questions in terms of mathematics, typically systems of differential equations," she explained. "Sleep is both regular and random. It's regular in that we go to sleep generally at the same time of day. The randomness occurs in infants who seem to have no pattern to their sleep cycles and in the variability of when we might wake up during the night. I've been investigating how neural structures in the brain affect the random and regular transitions between sleep and wake."

By describing through equations the properties of neurons involved in sleep-wake brain circuitry, Best develops mathematical models for the way in which the neurons interact and influence each other. She checks model predictions against data that biologists have accumulated in studies involving both humans and rats. Surprisingly, baby rats' sleep patterns go through similar changes as those of human infants, but it is not clear how similar adult rat sleep is to human sleep.

"The idea is to see how people sleep normally, so we can understand when things go wrong," Best said. "Throughout the night we experience bouts of sleep and wakefulness. There's variability that we're aware of, but actually even more variability is occurring--we only recall longer wake episodes. However, both short and long episodes occur, and that's something I'm trying to understand. Experimentalists collect data on these wake-sleep bouts. Since the length of sleep and wake bouts and the transitions between them show some regular and some random behavior, the differential equations must have both of these facets."

Best became interested in sleep research as a doctoral student in mathematics after she had a bike accident. She suffered a serious head injury and began to experience simultaneous sleep and wakeful moments. In other words--not to be confused with daydreaming--she would experience dreams while being awake, and memories and dreams were being stored in a way that differentiating between the two was difficult. The medical literature of the time, however, said her experience was impossible.

"In 10 years, there have been a lot of changes in this field," she said. "Ten years ago, the emphasis was on regular patterns. Now the random aspects of sleep are getting more attention. Models are now based on the real underlying physiology."

That means that Best now spends a lot of time working with non-mathematicians. Beyond reading research papers by biologists and neuroscientists and using data from their experiments in her model, Best also works directly with sleep researchers who do experiments on rodents or who see patients clinically.

"You need a lot of interaction with biologists and medical scientists, and you have to have conversations with the people who generate the data," Best said. "If I relied just on reading the papers, I would not be able to understand all of the underlying hypotheses and the ways in which the data was collected, and that could significantly affect how I formulate the mathematical models."

Best's research benefits from the Mathematical Biosciences Institute at Ohio State, which hosts 12 workshops a year, drawing world-renowned bioscience experts and providing an important crossroads for biology and mathematics. Best, herself, collaborates with researchers both at Ohio State and at other institutions. In fact, she's currently on sabbatical at Duke University so she can work more closely with some of her collaborators there.

"The understanding of sleep-wake cycles can have enormous impact on developing a better knowledge of the dynamics of the brain and, in turn, how systems within an entire physiological organism interact and function," said Mary Ann Horn, an NSF Division of Mathematical Sciences program director. "Research that involves collaboration between mathematical and biological scientists gives rise to results for which not only does the biology inform the modeling and analysis, but also spurs new mathematical developments as novel techniques are developed to address these challenging questions."

"NSF support has been extremely important to my career," Best said. "It has allowed me to maintain a research group, support graduate students and devote myself 100 percent to my research during the times of year when my academic salary stops."

She believes the BRAIN Initiative, announced by the Obama Administration a little over a year ago, will also help advance this field of study, too.

"It's enormously difficult to figure out how the brain works," she said. "We're talking about 100 billion neurons, all this chemistry, hormones--so many variables. We have to infer how brains accomplish their tasks. And there are always multiple ways that a particular task can happen, so the challenge comes in teasing apart information, and in my case, building a good model that helps fill in the missing pieces."

Best and her collaborators are gradually doing just that when it comes to understanding sleep-wake cycles. Their findings indicate that the longer a "wake bout" during the night, the less likely it is that sleep will come along to interrupt it. And while one might think the same would be true for a "sleep bout," it doesn't appear to be. Sleep bouts seem to be equally prone to interruption at any moment. The mathematical models show how the structure of the neuronal network affects the timing of the sleep-wake bouts.

These findings may not sound particularly groundbreaking, but understanding interesting and unusual phenomena can give clues to the underlying sleep-wake mechanisms. Researchers investigate the mechanisms by transforming them into mathematical models and testing the models against data. If the models work well and provide a good understanding, then the researchers could potentially develop insomnia treatments, effective remedies for medical condition-induced sleep disorders, or strategies to reduce jet lag more quickly.

"There are a lot of data from sleep studies," Best said, "but data by itself does not give understanding. One must understand the underlying neural mechanisms. The sleep-wake field is growing very rapidly now, and this is providing new data for us to interpret and understand. The mathematical analysis and the comparison with new data should enable us to formulate a new understanding of how sleep-wake functions."