Will the Yellowstone supervolcano erupt in our lifetime?

Researcher studies the past to predict the future 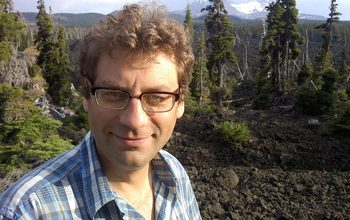 Ilya Bindeman is an associate professor of geological sciences at the University of Oregon.

As with many things in nature, it helps to understand the past when trying to predict the future.

Ilya Bindeman, an associate professor of geological sciences at the University of Oregon, believes this is true of the Yellowstone supervolcano and the likelihood that it will produce an apocalyptic eruption as it has three times over the last the last 2 million years.

"Yellowstone is one of the biggest supervolcanos in the world," he says. "Sometimes it erupts quietly with lava flow, but once or twice every million years, it erupts very violently, forming large calderas," which are very large craters measuring tens of kilometers in diameter.

If it happens again, and he says most scientists think that it will, he predicts such an eruption will obliterate the surroundings within a radius of hundreds of kilometers, and cover the rest of the United States and Canada with multiple inches of ash. This, effectively, would shut down agriculture and cause global climate cooling for as long as a decade, or more, he says. A volcanic event of such magnitude "hasn't happened in modern civilization," he says.

However, the National Science Foundation (NSF)-funded scientist doesn't think it's going to happen anytime soon--at least not for another 1 million to 2 million years.

"Our research of the pattern of such volcanism in two older, 'complete' caldera clusters in the wake of Yellowstone allows a prognosis that Yellowstone is on a dying cycle, rather than on a ramping up cycle," he says.

By this, he is referring to an ongoing cycle that occurs within the so-called Yellowstone "hot spot," an upwelling plume of hot mantle beneath the Earth's surface, when magma chambers, which are large underground pools of liquid rock, reuse rocks, eject lava, melt again and prompt large eruptions many thousands of years later.

It is a complicated process that also involves the position of the North American plate, which is moving at the rate of two to four centimeters a year, and its relationship to the hot spot, as well as the continuing interaction of the Earth's crust with basalt, a common volcanic rock derived from the mantle.

"Yellowstone is like a conveyer belt of caldera clusters," he says. "By investigating the patterns of behavior in two previously completed caldera cycles, we can suggest that the current activity of Yellowstone is on the dying cycle."

Calderas first form due to the hot spot's interaction with the North American plate, forming new magma after about a two-million-year delay.

"It takes a long time to build magma bodies in the crust," he says. "We discovered a consistent pattern: subsequent volcanism is a combination of new magma production and the recycling of already erupted material, which includes lava and tuff," a rock composed of consolidated volcanic ash.

By comparing Yellowstone to previous completed caldera cycles, "we can detect that the Yellowstone hot spot is re-using the already erupted and buried material, rather than producing just new magma, " he says. "Either the crust under Yellowstone is turning into hard-to-melt basalt, or because the movement of North American plate has changed the magma pluming system away from Yellowstone, or both of these reasons."

The Yellowstone hot spot has produced multiple clusters of nested volcanic craters, known as calderas, during the last 16 million years. "Caldera cycles go on for maybe several million years, and then it is done," he adds. "The current magmatic activity in Yellowstone is in the middle of the cycle, or at the end, as three caldera forming eruptions have already happened."

The three most recent eruptions, which occurred 2 million, 1.3 million, and 640,000 years ago, resulted in a series of nested calderas forming what we know as Yellowstone National Park and its immediate vicinity.

Eventually, the cycle comes to an end for unknown reasons.

"By performing micro-analytical isotopic investigation of tiny minerals in rocks, we are trying to understand when it's done," he says. "We know the behavior of the past and we know at what comparative stage Yellowstone is right now. We think Yellowstone is currently on a third cycle, and it's a dying cycle. We've observed a lot of material that represent recycled volcanic rocks, which were once buried inside of calderas and are now getting recycled. Yellowstone has erupted enough of this material already to suggest that the future melting potential of the crust is getting exhausted."

To be sure, however, he also points out that "everything is possible in geology, and not very precise."

Bindeman is conducting his research under an NSF Faculty Early Career Development (CAREER) award, which he received in 2009. The award supports junior faculty who exemplify the role of teacher-scholars through outstanding research, excellent education, and the integration of education and research within the context of the mission of their organization. NSF is funding his work with $533,606 over five years.

As part of the grant's education component, Bindeman is training graduate and undergraduate students using lab-based learning, summer research programs for undergraduates and community college students, and through new courses.

He also has developed exchanges and collaboration among graduate and undergraduate students and scientists in the United States, Switzerland, Russia, France and Iceland.

Bindeman's research involves using radioactive dating to determine the age of volcanic materials, such as tuff and lava, "with the goal of understanding its history," he says. "Knowing the age is important as a context for understanding everything else."

They analyze oxygen isotope ratios in quartz and zircon, and water- and heat-resistant minerals, from volcanic rocks. Despite re-melting, the zircon crystals have retained their isotope signatures, enabling the scientists to date their cores and rims, and look into the history of the magma assembly.

"We found patterns indicating that material was recycled as older volcanic rocks forming the roofs of magma chambers collapsed and re-melted during eruptions, only to be re-ejected in the next volcanic outburst," he says.

The results of those studies enabled them to determine the current state of the supervolcano, and predict that a new catastrophic caldera-forming eruption likely will happen only in 1 million to 2 million years, probably in Montana.

An eruption of power has not occurred in the world for at least 74,000 years. "The last one was in Toba, Indonesia," he says.

Bindeman also is investigating the potential effects of the next massive eruption on the atmosphere. "Sulfur dioxide gas will be released in large quantities, resulting in global cooling and ozone destruction, but nobody knows yet how cold it's going to get and what will be the effects of temporary ozone layer destruction," he says.

To convey the power of the last Yellowstone eruption, and quite possibly the next one, Bindeman cites two recent examples for comparison purposes: The 1980 eruption of Mt. St. Helens in Washington State, which killed 57 people and caused widespread destruction, spewed one cubic kilometer of material into the air, he says. The 1991 eruption of Mt. Pinatubo in the Philippines, which killed hundreds of people and for several years decreased global temperatures, released ten cubic kilometers, he says.