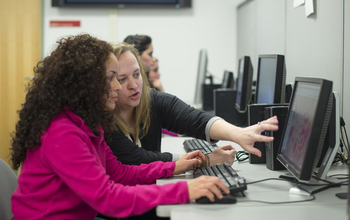 In colleges and universities across the country, undergraduate students in the social sciences are using an online educational tool that goes beyond the traditional presentation of demographic data as numbers and tables. Social Explorer provides students with robust data visualization capabilities, allowing students to "see" and "play with" their data by generating maps.

Social Explorer is now routinely used in undergraduate introductory and upper division sociology courses, as well as in topical seminars, where students design and research their own demography questions.

Though Social Explorer was originally designed for teaching purposes, the utility of this tool today goes far beyond the undergraduate classroom. In fact, it was the basis for, a tool released by the U.S. Census Bureau late last year to give members of the media and the public a means to create maps displaying a range of demographic information, including median household income, educational level, and home ownership rate.

Development of an undergraduate teaching tool

In 1993, the New York Times hired Andrew Beveridge, a sociology professor at Queens College of the City University of New York, as a consultant to help with demographic analyses of New York City and the greater United States. During this work, Beveridge realized the potential value of using demographic mapping techniques as teaching tools in the sociology classroom.

So in 1999, Beveridge turned to the National Science Foundation (NSF) with his idea, applying for and receiving a grant in the area of Course, Curriculum, and Laboratory Improvement through the Division of Undergraduate Education (DUE). The tool that Beveridge developed under this grant offered social science students the opportunity to visualize datasets.

DUE Program Director Myles Boylan funded this initial grant for the project that would later become Social Explorer. Boylan recognized how Beveridge's proposed work fit well in the larger movement underway within the social sciences with respect to simplifying the presentation of location-related features, stating that "spatial data are inherently difficult to process and understand."

Following the first iteration of his data visualization tool, Beveridge realized that the interface was proving to be beyond the capabilities of many students. The underlying datasets were inherently complex, and use of the tool typically required students to be proficient in sophisticated computer coding techniques.

So in his next research grant application to NSF, Beveridge included a collaborative partnership with sociologist David Halle from the University of California, Los Angeles, to develop a more accessible user interface and expand beyond New York City to the Los Angeles region.

"Our initial goal was to develop a tool easy enough for a freshman or a CEO to use," says Beveridge.

A later award from the National Science Digital Library program allowed Beveridge to take his visualization tool nationwide, in part using material from the National Historical Geographical Information System. Then, in 2002, the collaboration launched the product known today as Social Explorer, which offers robust visualization capabilities for a massive dataset that is drawn from complete historical U.S. Census Bureau records, spanning the entire country and more than two centuries.

"Little did I expect or even hope that a small-scale concept demonstration project would lead to an application used last year alone by more than 750,000 individuals, who made over 14 million maps, while helping to educate hundreds of thousands of students," says Beveridge.

The full Social Explorer package is now distributed by a free limited edition, by subscription from Oxford University press, and as a student edition licensed by Pearson Higher Education for use with many of their textbooks. The current version of Social Explorer provides access to U.S. demographic data dating to 1790, in addition to religion, election, and business activity data.

"The approach developed by Beveridge in creating Social Explorer has considerably facilitated the ability of students to understand social forces at the spatial level, particularly racial and demographic trends," says Boylan. With many more educators including the utilities offered by Social Explorer into their social science curricula, the tool's popularity continues to grow.

More recently, Beveridge's research collaboration with Social Explorer has expanded to include Leilah Lyons, as well as continuing work with Joshua Radinsky, both faculty members at the University of Illinois at Chicago.

As part of their work, the team is implementing Social Explorer in Chicago public schools' social science classes, an effort that entails not only developing appropriate, classroom-specific curricula for individual teachers but also supporting those teachers in the process of implementation.

"Incorporating Social Explorer into a social studies classroom is as much about the teachers as the students. Every teacher is excited and loves it," states Radinsky. "But the biggest challenge is for teachers to develop clear objectives for why they're using Social Explorer."

With a clear focus on learning objectives, teachers are more confident engaging Social Explorer and its extensive capabilities.

Radinsky has also found that many teachers initially expect him to offer them a pre-existing map paired with pre-written questions, like a classic textbook activity. However, Radinsky is more interested in developing lessons that generate questions, instead of providing those questions.

"When students can choose what they want to investigate, it's a very empowering experience," says Radinsky. "I want students to wonder and to question datasets and to think why certain types of data are or are not gathered."

From a research perspective, the investigators are using this effort to study how pre-college students develop representational fluency, otherwise known as the ability to create and interpret visual representations of data. Using Social Explorer helps students understand a map as a representation of the world with colors and shapes that can represent people and historical time and with data that can be gathered in different types of units.

In addition to supporting the educational experience, the researchers are engaging demographic groups that have previously been underrepresented in science, engineering, technology, and mathematics (STEM) fields.

For example, the team utilizes the American Migrations Project, which is a teaching and research resource, to explore how African American and Latino migrations within the United States have shaped our collective history. Because the team works with teachers and classrooms in minority communities, as students reach out to local community members for help with their social studies projects, the effort continuously engages larger sectors of underrepresented communities.

Supporting the scientific literacy of all Americans

Radinsky, who is a self-described believer in "the democratization of data," says that the team's work with Social Explorer is much broader than serving the educational needs of K-12 students and undergraduates. He explains that, "historically, Census Bureau data have been perceived as only accessible to the most educated individuals, with few opportunities for the average person or student to engage with this data collection."

By working to engage the public with Census Bureau data and the Social Explorer platform through various online and museum experiences, the research team hopes that nationwide demographic data will become increasingly accessible to every American. For example, the Social Explorer platform has already been adapted to create other publically accessible tools.

In late 2013, the U.S. Census Bureau released Census Explorer. Built on the Social Explorer platform, this free, web-based tool functions very similarly, offering users access to demographic data from 1990 to the present. Because the data that Census Explorer engages were gathered at the resolution of census tracts, which are small geographic regions defined specifically for the purposes of census taking, users can analyze trends within neighborhoods, among neighborhoods, or even across states.

Within the first week of its release, Census Explorer had more than 70,000 users, including 40-50 media outlets. After a few months, the technology had enabled more than 100,000 users to create 4 million data maps.

Michael Ratcliffe, an assistant division chief of the Census Bureau's Geographic Division says, "Census Explorer leverages the power of both Social Explorer's functionality and the Census Bureau's expertise to provide easy access to the richness of Census Bureau data and maps. It is a tool that should be in every analyst's tool kit."

Additionally, in the future, visitors to Ellis Island will find a new opportunity to learn about immigration within the United States. Beveridge and his team are working with the Ellis Island Immigration Museum to install an interactive kiosk that will allow visitors to investigate immigration patterns based on ethnic and racial data. Users will be able to see where certain groups settled within the United States, and how these patterns changed over time. Generations later, many of these patterns still significantly influence local culture.

To date, Social Explorer has reached hundreds of thousands of undergraduates, in addition to many K-12 teachers and students, and via Census Explorer, a significant fraction of the American public. These impacts have promising implications for both the next generation of scientists, and the technological literacy of all citizens.