Earth Day in the future: What will it be like? 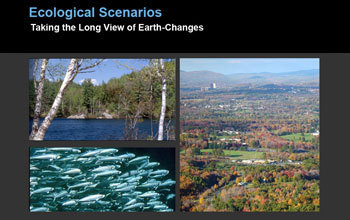 We stand now where two roads diverge. But unlike the roads in Robert Frost's familiar poem, they are not equally fair. The road we have long been traveling is deceptively easy, a smooth superhighway on which we progress with great speed, but at its end lies disaster. The other fork of the road--the one less traveled by--offers our last, our only chance to reach a destination that assures the preservation of the earth.

Acid rain in the Northeast, urban growth in Phoenix, climate change in the Arctic. El Nino and West Coast fisheries, land-use change in New England, nutrients in watersheds in the Midwest. Scientists are peering into the future to discern long-term outcomes of these and other environmental changes.

Are there good news stories among the concerns?

Acid rain in the Adirondacks: A success story

Big Moose Lake in New York's Adirondack Mountains. The lake is a paradox: a picturesque boating and hiking spot and a poster child for damage from acid rain.

Hubbard Brook is one of 25 such NSF LTER sites in ecosystems around the world, from coral reefs to deserts, grasslands to the open sea.

At the peak of the acid rain crisis in 1990, lakes such as Big Moose had a four-fold increase in sulfate, a ten-fold increase in nitrate and a drop in pH from 6.5 to 5, leaving the water bodies more acidic and placing sensitive aquatic ecosystems at risk.

"These lakes are the canaries in the coal mine," says scientist Charles Driscoll of the Hubbard Brook LTER site and Syracuse University.

Research at Hubbard Brook shows that with additional pollution controls, the number of Adirondack lakes "in recovery" could nearly double by 2050, from 40 to 76. Otherwise, the damage in half those lakes will take 200 years to undo.

Scientists, government officials and communities from city-dwellers to rural residents want to know: How will environmental changes play out in the future?

Results of researchers' efforts to understand and anticipate these changes were the topic of the annual NSF LTER Mini-Symposium, held at NSF on Feb. 21, 2014.

Presentations addressed ecosystem vulnerability, resilience and adaptability; and why long-term data are essential to understanding and predicting future responses to natural and human-caused environmental changes.

Identifying the factors, mapping the responses

"This research demonstrates that long-term data are essential," says Twombly. "It indicates which decisions to modify, and shows the consequences in ecosystems as we have come to know them for the past 50-100 years."

LTER scientists work to identify the factors that drive future environmental change and map potential ecosystem responses that could result.

"Ecological scenarios show great promise, for example, in advancing our understanding of marine and other aquatic ecosystems, with potential new answers for managing natural resources such as fisheries," says David Garrison, an LTER program director in NSF's Division of Ocean Sciences.

In Wisconsin's urbanizing and heavily farmed Yahara River watershed--home to 372,000 people in and around the city of Madison--ecologists are using models to evaluate future pathways to sustainable water supplies. As climate changes, increasingly strong and frequent storms are causing high levels of fertilizer to leach into rivers and lakes, jeopardizing water quality.

"One of the goals of LTER sites is to reveal potential long-term directions and help people integrate long-term thinking into their daily lives," says ecologist Steve Carpenter of the North Temperate Lakes LTER site and the University of Wisconsin-Madison.

That includes plans for the future of Cherokee Marsh, a sunken enclave surrounded by cattails and bulrushes. The marsh is a mere dot on a map of the state of Wisconsin, but its importance reaches far beyond the wetland's edge.

The Yahara River flows through the marsh, swirling through sago pondweed, glade mallow and other plants as it goes. Its next stop is the twins of Madison: Lakes Mendota and Monona.

The river and its watershed provide Madison with critical ecosystem services such as water quality and flood protection.

But the marsh, the twin lakes that lie downstream, and the river that runs through them may be threatened by the effects of climate and land-use change.

Among the most urgent challenges facing the world today is how to ensure an adequate supply of good quality water, say scientists like Carpenter, especially in light of burgeoning human needs and climate variability and change.

New pathways to a sustainable future

Across the country in the Sonoran Desert, researchers like David Iwaniec of the Central Arizona-Phoenix LTER site and Arizona State University are developing future scenarios for the city of Phoenix. They're evaluating what's most likely to happen in the urban Phoenix ecosystem by the year 2050.

"Stakeholders are starting to ask: What can we do to move in the direction of sustainability?" says science policy analyst Kathy Fallon Lambert of the Harvard Forest LTER and Harvard University. Scientists at Harvard Forest are mapping, acre-by-acre, what the Massachusetts landscape might look like in 2060.

LTER scientists are also modeling future changes in the most remote parts of the globe.

In the Pacific Ocean's California Current, marine organisms throughout the food web are responding to a strong climate event: the El Niño Southern Oscillation, found oceanographer Emanuele Di Lorenzo of the California Current LTER site and Georgia Institute of Technology. What does that signal mean for productive U.S. West Coast fisheries?

In northern Alaska, increasing wildfires, says ecologist Gus Shaver of the Arctic LTER site and Marine Biological Laboratory in Woods Hole, Mass., are sweeping across tundra that hasn't burned in at least 5,000 years, releasing long-stored carbon into the atmosphere. What are the long-term effects on this land of fire and ice?

"Awareness of ecological relationships is--or should be--the basis of modern conservation programs," wrote Rachel Carson in Essay on the Biological Sciences, "for it is useless to attempt to preserve a living species unless the kind of land or water it requires is also preserved."

Scientists at NSF's LTER sites are working to understand those relationships, and to discover where everything from the flow of a river to the winds of El Niño will take us in a future we're beginning to be able to predict.