How to build a brain-machine interface

New-generation brain technologies are now in use thanks to new body-compatible materials, smaller electronics and better sensors designed by engineers 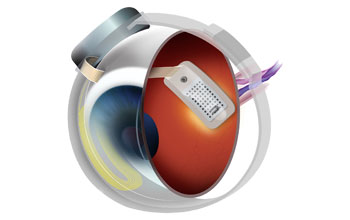 Devices that tap directly into the nervous system can restore sensation, movement or cognitive function. These technologies, called brain-machine interfaces or BMIs, are on the rise, increasingly providing assistance to people who need it most.

But what exactly does it take to build a BMI?

To understand how (and why) BMIs are developed, the engineers who created the artifical retina can provide a kind of "how-to" guide for the curious and technically inclined.

While a greater understanding of biology has been essential to BMI development, advances in engineering and materials science have led to their design and performance. From creating new materials that are more compatible with the human body, to designing smaller electronics and better sensors, engineers are playing a major role in the development of existing and future brain technologies.

Like any other engineering challenge, building a BMI involves background research, feasibility testing, prototyping and production.

But building a BMI is unique in that engineers must design these devices to seamlessly interface with another complex system: the human nervous system.

The model: The bionic eye

In 2013, the U.S. Food and Drug Administration approved the Argus II® Retinal Prosthesis System for use in individuals who have lost their vision as a result of severe-to-profound retinitis pigmentosa. A genetic condition affecting one in every 4,000 individuals, early symptoms of retinitis pigmentosa often include night blindness, followed by gradual but progressive loss of peripheral vision and ultimately total blindness.

"Seeing my grandmother go blind motivated me to pursue ophthalmology and biomedical engineering to develop a treatment for patients for whom there was no foreseeable cure," says the device's co-inventor, Mark Humayun, associate director of research at the Doheny Retina Institute at the University of Southern California.

Without this motivation, the daunting design challenges and constraints might have been enough to make even the most meticulous researcher think twice about tackling such a project.

"The artificial retina was a great engineering challenge under the interdisciplinary constraints of biology, enabling technology, [and] regulatory compliance" says Humayun's collaborator Wentai Liu, a professor of biomedical engineering at the University of California, Los Angeles.

In addressing such a challenge, before researchers begin to worry about the technological details, they must first determine whether a BMI is the right fit.

Step one: Decide if a condition is a good candidate for a BMI

Like most engineering endeavors, the first step in building a BMI has more to do with understanding the system at hand than with cutting-edge design.

When it came to creating an artificial retina, this meant that researchers needed to determine which parts of the visual pathway were working and which were not.

"We needed to know there were enough neurons left in the eye to stimulate and still transmit nerve impulses and communicate with the vision center of the brain," Humayun says.

With initial funding in the late 1980s and early 1990s from the National Eye Institute, the National Retinitis Pigmentosa Foundation and others, the researchers showed that neurons in the retina were still capable of responding to electrical stimulation--a sign that patients with this disease could potentially benefit from a BMI. If the nerves had been damaged, then signals would not have had a path to the brain, meaning that an artificial eye alone would not have solved the problem.

Step two: Determine if a fix is feasible

Once a condition is identified as a good candidate for a BMI, investigators need to determine whether the basic technologies needed to create such a device are even feasible.

For Humayun and colleagues, this meant tackling some tough engineering challenges, including how to mimic photoreceptor activity with artificial electrical stimulation, how to power the implant and enable real-time data transmission and how to integrate external components with the implant.

With early support from the National Science Foundation and others, the researchers set about answering each of these questions throughout the 1990s, meticulously developing prototypes of the miniature video camera and belt-worn computer that would capture and convert visual information, the integrated computer chip that would wirelessly receive the data and the tiny electrode array that would stand in for the damaged photoreceptors.

When designing a BMI, it's critical to remember that these devices must operate in concert with the human body. In addition to incorporating feedback from potential users throughout the design process, this means that the device must be designed in such a way that it can function effectively in the presence of body fluids and tissues.

Humayun and his collaborators addressed this challenge by creating a hermetically sealed packaging system that would allow the device to work in the gelatinous environment of the eye. They also carefully planned how they would implant the device to minimize the disruption to the body.

"The inside of the eye is a relatively immune-privileged site and the scarring reaction is minimal," Humayun says. "But, having said this, the surgery and the attachment of the device inside the eye has to be performed in the least invasive manner possible."

Before a BMI reaches the end user, each component must be optimized, miniaturized and integrated with the rest of the device.

Unlike traditional design practices, which focus on optimizing each component, the artificial retina was developed by tweaking and streamlining the device as a whole, known as systems-level optimization.

A sleek, small system that packs a punch.

"The engine for the artificial retina is a 'system on a chip' of mixed voltages and mixed analog-digital design, which provides self-contained power and data management," Liu says.

Step five: Scale up and get the go-ahead

One of the final steps in building a BMI is getting it into the hands of those who need it. When the initial technology is developed in an academic research setting, this can often mean handing it off to a company that will facilitate manufacturing and manage clinical trials and commercial distribution to patients.

Founded in 1998 by Humayun's former graduate student Robert Greenberg, Second Sight Medical Products Inc., took the artificial retina from the laboratory bench to the marketplace. Clinical trials for the first-generation device (the Argus I) were conducted in 2002, and were followed by pilot studies and patient trials for the Argus II in 2006. On Feb. 14, 2013, the Argus II became the first visual prosthesis to receive market approval in the United States.

Perhaps the most important aspect of building a BMI is recognizing that there is always room for improvement.

"While we are still at the earliest stages, people are already benefiting from these implants, through improved mobility," says James Weiland, former deputy director of the Biomimetic Microelectronic Systems (BMES) Engineering Research Center at the University of Southern California.

"Working on advanced technology projects convinces me that it is feasible to create the technology needed for better outcomes."

Led by Humayun, the BMES Engineering Research Center was founded in 2003 to continue to advance the development of this technology. The latest prototype features an ultra-miniature camera that can be implanted directly in the eye. The system also contains more than 15 times the number of electrodes in the Argus II, which the researchers anticipate will greatly improve image resolution.