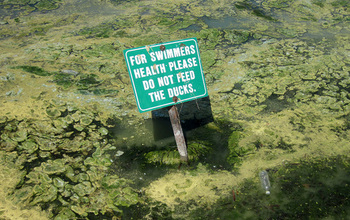 The discovery is the first report of a virus carrying genes for sulfur oxidation.

Scientists engaged in a study of long-term water quality trends in Midwestern lakes found some good news: little change in water clarity in more than 3,000 lakes.

Look deeper, and the research becomes something more: a chronicle of a new source of data for scientists, data from residents of towns and villages surrounding the lakes.

The results are published this week in a paper in the journal PLOS ONE.

The paper co-authors analyzed almost a quarter of a million observations taken over seven decades on 3,251 lakes in eight Midwestern states.

But the researchers didn't collect those data. The observations came from lakefront homeowners, boaters, anglers and other interested members of the public wanting to know more about what's going on in "their" lakes.

Noah Lottig, a co-author of the paper and a scientist at the University of Wisconsin-Madison's Center for Limnology, says that ecologists are looking at big-picture issues--such as how changes in land use or climate affect ecosystems--at state, national and continental scales.

This time, the help of local residents was key to the findings.

Lottig and freshwater scientists from across the United States combed through state agency records and online databases. The water clarity measurements they sought were taken by non-scientists using a circular, plate-sized instrument called a Secchi disk.

Used in the aquatic sciences since the mid-1800s, Secchi disks hang from a rope and are lowered into the water until their distinct black-and-white pattern disappears from view, a distance that marks the "Secchi depth."

Lake associations and other groups have used the disks for decades to document conditions in their respective waters.

With a dataset covering more than 3,000 lakes and stretching back to the late 1930s, the team decided to ask questions about long-term change.

Before and after the Clean Water Act

The Clean Water Act provided a useful frame of reference. Signed into law in 1972, the act set water quality goals for all U.S. waters.

Thanks to the data collected by residents, Lottig's team had access to water clarity measurements for decades before and after the act came into effect.

Somewhere in that data, the researchers reasoned, they might detect a landscape-scale shift over time to clearer (often an indicator of cleaner) water.

While there was a slight one percent yearly increase in water clarity for the lakes, Lottig says, "most of the lakes are just chugging along, not changing much through time."

While some lakes improved, others did not. Taken as a whole, there was no major change in clarity at the landscape scale.

Lottig is part of the "Cross-Scale Interaction" or "CSI Limnology" project, an effort to collect global data on water chemistry and aquatic biology that will add needed context.

For Ken Fiske, collecting data has been well worth the effort.

In 1985, Fiske saw an announcement for volunteers for a new Wisconsin lake monitoring program. Fiske had been coming to northern Wisconsin from his home in Illinois for years and had recently bought property on the shoreline of Lake Adelaide.

"My interest was in finding out what the quality of water in Lake Adelaide was and seeing what we could do to maintain it," he says.

For the next several years, Fiske went on a monthly five-hour drive to Lake Adelaide to take measurements. Eventually, he found some neighbors to help. Some 30 years later, the group is still going strong.

"We've been doing it long enough that it makes the results meaningful," Fiske says.

Scientists are harnessing efforts like Fiske's to try to answer questions about not just one lake, but 3,251--or more--of them.