Understanding mudslides and other debris flows through mathematics 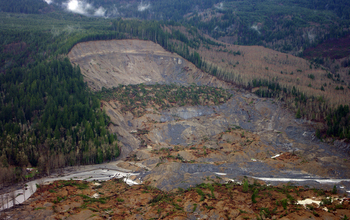 USGS aerial survey of the upper parts of the Oso, Wash., landslide.

They can come along so suddenly that people, homes, roads and even towns are buried or destroyed without much warning. Recently, we've had dramatic reminders of this, such as the mudslide in Oso, Wash., where 41 people died; an avalanche on Mt. Everest that killed 13 experienced Sherpas and another landslide event in Jackson, Wyo. And as much as ancient Pompeii serves as the most dramatic, historic reminder of the incredible element of surprise these events can wield, what seems extraordinarily incalculable is becoming...well, calculable.

Maybe that doesn't seem so surprising on the surface as one reminisces about math story problems of long ago, such as, "if an avalanche flow is moving at a rate of 50 meters per second, how long will it take to swallow up a village located 30 kilometers away?" Unfortunately, for geologists and others involved in these issues, the particulars make the solution far from simple algebra.

Earthen, volcanic and snowy materials--all of which can move quickly downhill--do so at varying rates depending on their composition, the composition of the geological features over which they flow, and the weather. The benefit to building forecasting models--showing how the earthen materials are prone to move and where they might go post-volcano or during a particularly wet spring--is that they can assist policymaking, urban planning, insurance risk assessment and, most importantly, public safety risk reduction.

One National Science Foundation (NSF)-funded mathematician, E. Bruce Pitman from the University of Buffalo, has been modeling the dynamics of flowing granular materials since 2001 when engineering and geology colleagues came together to start estimating volcanic flow.

"You see these wonderful volcanic eruptions with the plumes, but gravity currents are going down the mountain even as all this stuff is going up into the air," Pitman said. "It can be very deadly. And depending on the mountain--if there's snow on the mountain--then you have this muddy sort of muck, so it can go even faster downhill."

Volcanic flows and mudslides are examples of what geoscientists call "gravity currents."

According to the Centers for Disease Control and Prevention, "landslides and debris flows result in 25 to 50 deaths each year" in the United States. The U.S. Geological Survey (USGS) reports that "all 50 states and the U.S. territories experience landslides and other ground-failure problems," including 36 states with "moderate to highly severe landslide hazards," which include the Appalachian and Rocky Mountains, Pacific Coast regions and Puerto Rico.

USGS notes that areas denuded because of wildfires or overdevelopment are particularly vulnerable to the whims of what's termed generally as "ground failures."

Pitman has spent the past 13 years studying the flows of the Soufrière Hills volcano on Montserrat, the Colima volcano west of Mexico City and the Ruapehu volcano in New Zealand, among other sites. Working with an engineer whose expertise is in high performance computing, statisticians and several geologists, Pitman studies geophysical mass flows, specifically volcanic avalanches and pyroclastic (hot gas and rock) flows, which are "dry" flows.

"We started modeling volcanic flows as dry volcanic flows, so the equation described the material as each particle frictionally sliding over the next particle," Pitman said. "However, we knew it wasn't only solid particles. There could be air or water too, so we developed another model. This naturally makes the analysis harder. In mudslides, you have to factor in mud, which is a viscoplastic fluid--partly like a fluid but also able to deform like a plastic material and never rebound. In wet or dry materials, you can make some reasonable predictions because flow is more or less the same. It is much harder to do that with mud."

Pitman explained the way a mathematician works to develop a predictive model of a landslide.

"There are three questions," he said. "First, is something going to happen? That is notoriously difficult--what's going on under the ground? Where's the water table? How much moisture is in the soil? What's the structure of the soil? Since we can't look under the ground, we have to make all kinds of assumptions about the ground, which poses difficulties.

"Secondly, if a slide were to occur, what areas are at risk? That's something that with a math model you can hope to explain. OK, is the east, west, north or south slope going to slip? How large a flow? Which areas downstream are at risk?

"Lastly, you have to ask what part of the model do you most care about. This helps you to simplify the modeling. Then you run the what-if scenarios to determine the greatest risk. Is it an area at risk and do mudslides happen regularly?"

According to Michael Steuerwalt, an NSF Division of Mathematical Sciences program director, many would be inclined to think that lava flows are far more complicated to model because of the issues of heat and explosive force. However, a mix of dramatically different particle sizes and shapes--which range from dirt grains to people, cars, houses, boulders and trees--can considerably complicate a slide model.

"If you're trying to deduce, for example, where under this mudslide is the house that used to be way up there (along with its inhabitants), then the model is very complicated indeed," Steuerwalt said. "Math won't solve this problem alone, either. But with topographic data, soil data and predictions of precipitation, one could make assessments of where not to build and estimates of risk. This really is an opportunity for mathematicians coupled not only with statisticians, but also with geographers, geoscientists and engineers."

Ultimately, the process needs good data. But it is also about understanding where the model has simplified the equation and created "errors."

"This may sound odd, but it's not about developing the perfect model," Pitman said. "All models have errors in them because we make simplifications to wrap our brains around the physical processes at work. The key is quantifying those errors."

So, essentially the mathematician has to know where to simplify the equation, and that too comes with his collaborative approach and working with other experts, such as volcanologists, and then interfacing with public safety officials.

For a guy who "hated" math in the fifth grade and majored in physics initially in college, this work has turned into something he loves, but also something where he feels he makes a difference.

"I love how this work stretches me and my ability to understand other fields," he said. "I get to explore what interests them and what just might be the little hook that allows me to pry apart a problem."